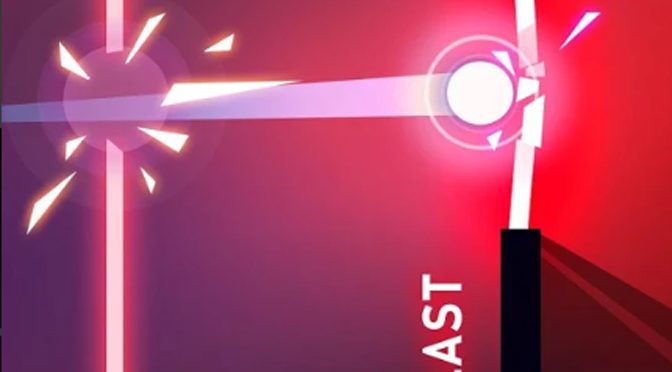 My time wasting this week continues to be of the mobile variety. In my search for a game to kill some time with, I found Bounce Blast.

Bounce Blast is an arcade-style game that challenges the player to build up a high score. They do this by crashing a glowing ball through walls. Tapping the screen accomplishes this task when the ball is in front of the part of a wall that can be broken. The parts of the walls that can break become smaller as the player progresses, which is a simple, but effective way of increasing the difficulty.

Players don’t have much time to spare in this game. That’s because they only get a single bounce in each section of the game before spikes appear under them. Touching those spikes is instant death, so it’s a good idea to avoid them.

The gameplay behind Bounce Blast is incredibly simple, but it’s also entertaining. One of the small details I enjoy about the game is the ability to bounce through multiple walls before touching the ground. This is a little more difficult to do, but it rewards players with additional points. That can help lead to higher scores, but also comes with additional risk. It isn’t a major incentive, but does give the game some extra appeal.

There’s also some in-game currency for players to unlock in Bounce Blast. The game doesn’t hand it out much, but I wouldn’t say I was hurting for it, either. Players can use this currency to buy new skins and such for the ball. These are only for visual effect and don’t change the gameplay at all.

Just like with the majority of mobile games, Bounce Blast features ads. The game’s a little heavy on them too. I typically ran into one after every run, which is way too often. Most of them are also video ads. There’s an option to watch an ad to continue a run as well after dying. I’m cool with that, but the others are the real bother to me.

The visuals in Bounce Blast are simple and work well on mobile devices. The player’s ball is a nice neon color that helps it stick out from the darker background. The walls are also pure black, which help them stand out as well. Then there’s the part of the walls that can be broken, which are various neon colors. These are some simple design choices, but they are also smart ones.

The audio in Bounce Blast is a simple beat that builds as the player progresses in the game. Accompanying it are also some sound effects that fit in well with the rest of the game. These aren’t really anything to write home about, but they are solid enough.

Overall, Bounce Blast is a decent way to waste some time. It’s a little too simple at times, but that type of mindless game can also make for a good time waster. Give it a shot if it sounds like something you might enjoy.