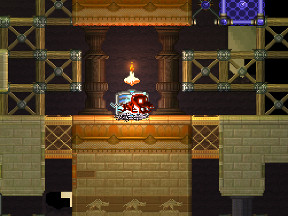 This week I was sent a code to check out a game that isn’t finished yet. That game is Full Bore. Upon hearing the name of the game, I was already excited about all the bore puns I could use to say how bad it is (I like puns more than I probably should), but I can’t do that.

Full Bore starts out with players choosing to play as either Frederick, the male bore, or Hildi, the female bore. Whichever bore is chosen by the player will run out into a field only for an explosion to happen beneath them and destroy the ground below. This drops the bores into an old mine shaft where a spaceship/missle is found. The bores get on the spaceship and are launched up into the vault of a wealthy mine foreman. All of the money is missing from the vault and players are forced to enter the mine to rebuild the foreman’s wealth.

While the story may seem somewhat bland and “boreing” (still managed to get one pun in) there’s actually a lot more going on. Additional story is revealed to players in the form of emails that can be found on computer terminals all throughout the mine. These emails reveal that there was once a race that was more advanced than what these bores are or that the old race was bores. It all makes for a great mystery to try and solve. Granted, only half the story is done at the moment, but I’m interested enough that I want more.

Gameplay in Full Bore is that of a 2-D platformer with a heavy focus on exploring and solving puzzles. Puzzles in the game are based on moving blocks to open new paths and reach gems and new areas. Many of the blocks are affected by gravity and this is used to really make players think about what they are doing. Other blocks include batteries, laser guns and platforms that grip onto walls. There are also a few purple blocks that can create strings of explosions to help move other blocks that are unbreakable in the correct positions to solve a puzzle.

Controls in Full Bore are fairly simple. Players can move the bores left or right with A and S and holding W while moving will make them jump up onto nearby platforms. Players can also rewind time to get a second try at puzzles they might have messed up. Frederick and Hildi both have the same moveset and neither had unique abilities. The basic moveset is all that’s needed in this game though because of its heavy focus on solving puzzles over pinpoint platforming. The controls area also really fluid and make the game easy to pickup and play.

Graphics in Full Bore are straight out of the 16-bit era. Despite this, the environments and characters have a lot of detail and it’s easy to tell what blocks do what and which paths can be taken by the bores. The graphics remind me a lot of other 2-D games, such as Terraria and Starbound, that have been released on the last few years.

One thing about Full Bore that I thought was really cool is that Frederick and Hildi actually have different animations. I figured I was going to be two characters that are just palette swaps of each other and nothing more. However, the two bores have different animations for digging, smashing, falling and just about everything else. It may be a small thing to some people, but it showed me that the developers wanted to give their game a little extra love.

Audio in Full Bore is wonderful. The game is filled with rich Blues tunes that make digging though the game’s huge underground environments all the more enjoyable than what it already is. Full Bore also has great sound effects. Everything sounds just right and there wasn’t any sound that seemed out of place to me.

Overall, I really like what I’m seeing in Full Bore. The game is filled with clever and enjoyable puzzles, really fluid controls and a story that is strung out like a good mystery. The game may not be done yet, but I am really happy with what I played and can’t wait for the developers to finish it. I guess it’s not a “boreing” game after all (okay, that one was a little forced).

One thought on “A Boreing Good Taste”