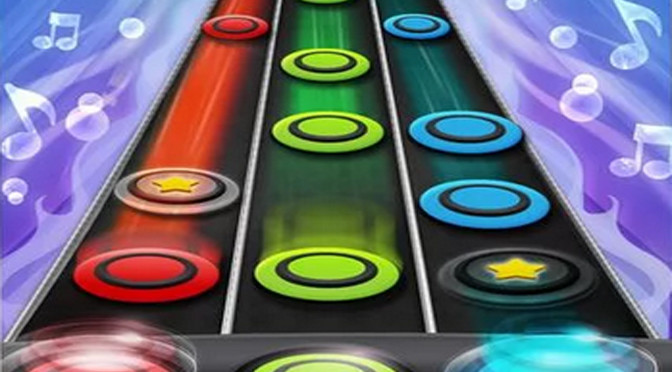 This week I took to my smartphone in search of a game to spend some time with. In my searches I discovered Rock Hero, a game that tries to cash in on the popularity of the Rock Band and Guitar Hero games.

Rock Hero plays a lot like the above mentioned games. Notes come down to the beat of the song and players have to tap on the to score points and continue playing. I decided to check out a game like this because its been awhile since I spent any time with a music rhythm game of this nature.

The controls in Rock Hero are a chore to say the least. There’s a lot of lag in the game that makes hitting notes at the right time a real pain. Luckily, this doesn’t matter. Unlike other music rhythm games, Rock Hero doesn’t penalize the player for tapping the screen when no note is present. This means that players can just tap like crazy and never have to worry about missing a note. This isn’t a good thing.

Rock Hero comes with nine different songs to play. There are also three different difficulties for each song. None of these songs are copyrighted material and are instead just generic instrumentals. However, the game does allow players to load up songs from their smartphone to play.

The nine songs that are already on Rock Hero play decently enough and the notes match up with the music, but this isn’t the case with songs loaded up from a smartphone. The game just can’t handle putting notes to a song. Instead, notes just comes down randomly and don’t match up to the beat at all. I noticed a few occasions where the game was still had notes coming down the line after the song had finished and the score was displayed. Also, if a song is too long, the game just gives up and stop sending notes. I played Bohemian Rhapsody and the game gave up part way through. There were only about 20 notes to hit during the entire song.

With all of these problems, the game is still playable. However, payable and enjoyable are two completely different things. What will really ruin the game experience is when it glitches and makes it impossible to read which song is being selected from a smartphone. Frequent ads and forced shut downs are also problems that plague this game.

Rock Hero’s graphics aren’t bad, but they do have some problems. The above mentioned glitch is one of them. Others include stacking multiple notes on top of one another in such a way that it makes it hard to tell they are there.

The audio in Rock Hero is a touchy subject. Technically, I could give the game a higher score for allow me to use my own songs, but seeing as this feature is horrible, I don’t feel that I should. I can say that I was disappointed that songs don’t cut out when notes are missed. As previously stated, the songs that the game offers up are generic at best.

Overall, I can’t recommended downloading Rock Hero. Even as a free game, it doesn’t have enough going for it. The horrible gameplay and lack of song selection kill the game and uploading songs from a smartphone is useless. The graphics are a little wonky at times and the audio is generic.