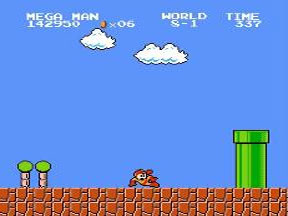 Hello everyone! As you may know there wasn’t a Time Waster last week. Sucks I know but you’ve lived through it. That being said I have a very nice treat for you all.
So this week we are going to check out a game that isn’t exactly new, but I wouldn’t call it old either. I’m talking about Super Mario Bros. Crossover.

Now you may be asking yourself "What exactly does the crossover in the title entail?" Why it involves shamelessly filling a well known and loved game with all your favorite characters from the NES era of gaming. There are a total of eight characters to play as in this game so let’s get started on them.

The first character is of course the one and only Mario. Mario isn’t exactly a surprise to anyone here. After all we are going to be running through his game. So while he doesn’t bring anything new to the table he is the most suited to play the game as and get the experience the original developers of Super Mario Bros. were looking for.

Secondly we have Ryu from the Ninja Gaiden series. Ryu is probably the weakest of all the characters in sheer attack. After picking up a mushroom Ryu will be able to throw his windmill shuriken and upon obtaining a fire flower will get more distance on sword attacks. Neither of these really makes him that great of a character, but what does make him a good character is Ryu’s ability to cling to wall and climb up them. As I’m sure you’ve probably guessed this makes him a life saver when falling into a pit.

Our third character is Link from The Legend of Zelda. Link is one of the more fun characters to play as because of his versatility. Instead of just being able to stab creatures Link can also hit them with his boomerang to stun them. This isn’t all that his boomerang can do though. It can also retrieve items for you. Don’t want to jump (yes Link can jump!) up and grab that fire flower, just throw your boomerang at it and watch it come straight to you. Besides the awesomeness that is the boomerang Link has other abilities as well. When Link gets a mushroom he will get an increase in physical attack power. After obtaining a fire flower though it gets even better. Link will now have the ability to shoot the famous sword beam! Overall Link is one of the better characters to play as in my opinion.

Now we move onto our fourth character. Simon from Castlevania joins in on the smash up as the slowest character of the game. Then again he does have his advantages just like all the others. Simon can not only attack with his whip but can also throw axes at his enemies as well. A mushroom will give Simon a slightly longer reach with more power and a faster rate of axe throwing. Grabbing a fire flower will further increase these abilities to make for some devastating gameplay. Also to note is that Simon is the only character in the game who can double jump!

Now we move on to one of my personal favorite video game characters, MegaMan! MegaMan as you might have gussed uses his Mega Buster as his main form of attack. When he gets a mushroom MegaMan gains the ability to charge the Mega Buster up to release a more powerful shot. Grabbing a fire flower should be obvious but I’ll tell you anyway, you shoot fireballs. Besides his buster MegaMan can also slide across the ground to move through levels faster. This doesn’t make him overpowered though. As with all games MegaMan is in his jump isn’t exactly anything to write home about. As a solution for this you can call Rush down to jump off of his back and spring jump past your obstacles.

Next up we have Bill from Contra. Bill starts out with his basic shot and then gains a machine gun after obtaining a mushroom. Then grabbing a fire flower with give you the shotgun (because giving him his flamethrower wouldn’t make any sense at all right?). Bill can lay down to duck underneath Bullet Bills or Bowser’s fire which helps make up for his absolutely horrible jumping ability.

It’s time for another favorite of mine, Samus from the Metroid games series. Samus will start off without her Power Suit but will still be able to use her arm cannon to fire shots at the enemy and roll up into a ball and drop bombs. When Samus grabs a mushroom she will gain her Power Suit and the Long Shot ability. A fire flower will upgrade Samus into her Gravity Suit and will give her the Wave Beam. This makes her one of the most damaging characters in the game. Also a neat feature is that enemies will sometimes drops missiles upon death that Samus can pick up and fire to deal more damage to her enemies with.

Our final (and most overpowered) character in the game is the Sophia III piloted by Jason. Sophia comes from the game Blaster Master (which if you’ve never played then shame on you!). Sophia can cling to walls and ceiling which easily allows her to breeze through most levels. As if that wasn’t broken enough Sophia can also fly for short distances, but wait there’s more! Along with this Sophia can also obtain Missles from dead enemies like Samus does, the difference is that Sophia’s missiles are homing missiles (Lakitu never saw it coming). Along with mushrooms and fire flowers increasing the amount of damage that her shot does I think it’s easy to see why Sohpia III and Jason are the most overpowered character in this game.

So all in all we have a great cast of characters to play as and each of them brings a unique twist to playing though Super Mario Bros., but what else does this game offer? Well it offers four different modes of play(such as Survival or Random character choices), five different difficulties (ranging from Super Easy to Extreme) and unlockable cheats that twist the gameplay even more.

Overall this is a wonderful way to waste some time. Granted some of the youth of today might not appreciate all of these "old" characters but those of us who grew up playing their games hold a special place in our hearts for them and will be glad to give them some play time in a new (old?) game.