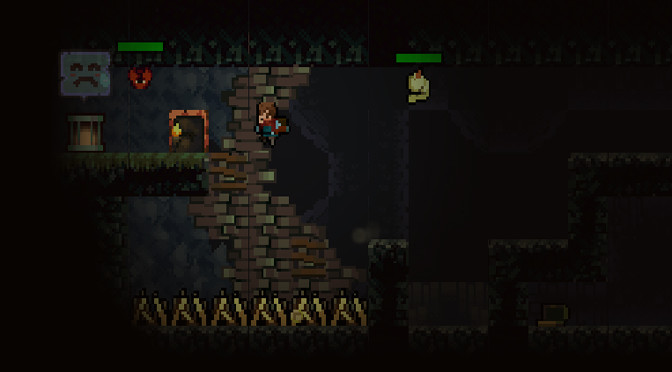 As I’m sure you’ve already guessed from the title, this week is a little bit different than a normal Time Waster. Instead of a traditional Time Waster, I’m checking out a game that is still in its alpha. This game is Vagante.

Vagante is a rouge-like game that has players exploring endless caverns in search of loot. Being that the game is still in its alpha, there isn’t really any story. All that is known is that the player is dropped off in a mountain range and left to their devices.

The gameplay in Vagante is really solid. Players adventure though endless dungeons, fight bosses and save fairies along the way. Characters in the game grow through their fights, but not due to experience or leveling up.

To make a character better in Vagante, players must complete certain tasks. Defeating a boss is one of these tasks. Each boss defeated drops a key that can be used to unlock a single large chest. There is at least one chest in each dungeon. Opening this chest grants the player three items and one Affinity point.

The next thing that can be done to make a character more powerful is to save fairies. Fairies can be found trapped in dungeons. Breaking their cages and carrying them to the end of the level will net the player some healing and an increased max health.

The final way to make a character better is to obtain better equipment. Equipment can be found hidden in chest that are all throughout the dungeon. Unlike the large chest, these ones don’t need keys. However, many chest have enemies around them that block the player’s path.

There are currently two different characters to play as in the game and both of them are unique.

The first character is a male fighter that starts out with a sword. He is much more focused on running straight into battle. By gaining Affinity points, players can unlock special abilities. These include being able to block, not taking fall damage, not being knocked back by attacks and more. This allows players to build their characters in such a way to better fit their play style.

The second character is a female that is much more focused on stealth. She starts out with a dagger and bow. Some of her abilities including going into a stealth mode, guaranteeing critical hits when attacking from stealth mode, allowing movement while aiming her bow, increasing penetration for her bow and more. This gives her a completely unique feel when compared to the male.

There is also a third character slot in Vagante’s alpha, but it doesn’t have a usable character. Based off of the items I’ve seen in the game and looking at the other two characters, my bet is that this character will either be a mage with abilities that make them better with spells, or a monk that is focused on attacking.

One of my favorite things that I’ve found in Vagante is how it lets players handle situations. Take the shop for example. Players can go about their business in a normal manner and buy from the owner. However, those looking for a challenge can kill the shop keep and loot his store (He spawns back every level). I also found that a teleportation spell can get the player in and out of his storeroom with him being none the wiser. Just don’t teleport into a wall. It’s an instant death.

Another situation I ran across that I dealt with in a unique way was a fight against a dragon boss. Typically, I try to keep my distance from this boss and and launch arrows at him for an easy victory (I do what it takes to win in these type of games). This time was a little different. The boss had spawned in a room with spikes all across the floor. There are block above this on a ledge that players can push down to safely travel across the spike floor. I pushed one of the blocks down onto the dragon and it did enough damage that I was able to kill him with a single attack after that.

Not looking to complain about the story element in Vagante or the lack of being able to save a character or anything like that. After all, the game is still in its alpha. However, there is one thing that I think really needs changed. This one thing is spikes. Spikes deal 999 damage to anything that touches them (except for bosses). Sure, its fun to watch an enemy land in a spike pit while jumping around, but that same rule applies to the player. This means that the player can have a long run in the caves ruined by one simple misstep. I’m not against the spikes dealing a lot of damage, say 20 or 30 (characters start with 100 health), but 999 is just way too much.

The graphics is Vagante are really nice. The game uses the old school styled graphics similar to other indie titles like Terraria, Starbound and Full Bore. While the graphics are 2D and what some would consider simple, lots of detail has been given to the sprites for the characters and enemies.

Vagante also has some really great music. The title theme in particular is very beautiful. The tunes played while exploring the caverns and shopping are appropriate and add to the game’s atmosphere.

Overall, I’m really excited for Vagante. The game isn’t anywhere near done and I’ve easily sank more time into it than many other Time Wasters that I’ve reviewed. It also helps that this game is more polished in its alpha than other games I’ve looked at. Here’s hoping Vagante goes past its alpha stage and gets a full release.

I don’t give games in their alpha or beta scores and will instead be filling everything in with 2.5 Gems.

If you think Vagante is the type of game that you would like, the alpha version of it can be downloaded here. Nukenine, the creator of the game, is also looking for feedback on its Tumblr from those who have played the alpha.