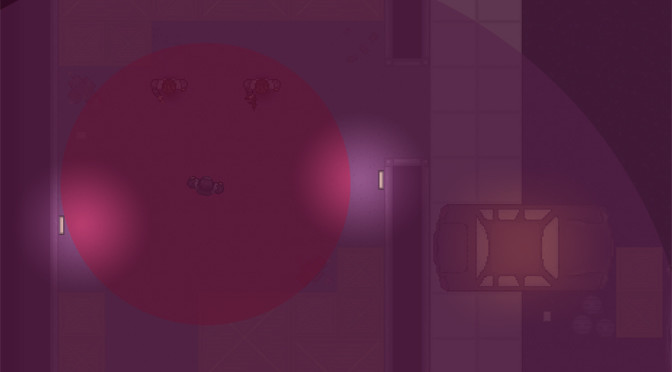 In lieu of a normal Time Waster, I’m checking out a game that is currently in it’s alpha. This game is Technicolour Rain.

Technicolour Rain is a top-down shooter that places the person in the shoes of a man escaping from prison. Being that the game is still in its alpha, not much more is known than this. Currently, only two levels are playable. This deals with the character escaping from prison and then finding out who sold him out.

Players control the main character’s movement with the W,A,S, D keys. Aiming in Technicolour Rain is control with the mouse. Shooting is left mouse click and picking up weapons is right mouse click. This is all pretty standard stuff for gamers.

Technicolour Rain has a unique feature in it that helps spice up the gameplay. This feature is the ability to create a spiritual version of the player to take over enemies with. Taking over an enemy grants the player control of them, but not unlimited control. What can essentially be considered a stamina bar resides in the top, right-hand corner of the screen. This bar depletes more the longer the player controls an enemy. Players can also instantly kill any enemy they posses by pressing F. Stamia can be recharged at fuse boxes, which seems strange, but I’m sure it plays into a part of the story that hasn’t been revealed yet.

Being that Technicolour Rain is a top-down shooter, my first instinct was to run in guns blazing and kill everything. You can do this, but the game rewards the stealthy. Sneaking around a possessing enemies is really how the game is meant to be played. If the player does want to run straight in to a fight, they are going to have to get really good at dodging bullets. This is because everything, players and enemies, dies with one shot.

I did say that Technicolour Rain rewards players who take a stealthy approach to its levels, but there is another aspect of the game that promotes the run and gun style. This is the high score system. Successive enemy kills within a few second of each other award the player combos for their high score multiplier. This means that a stealthy approach may hurt the player’s overall score. Sure, the score doesn’t actually do anything, but it might serve a purpose after the game leaves its alpha.

The graphics in Technicolour Rain aren’t bad. The title screen and menus are all filled with bright, vibrant colors. The game itself is a lot darker. In fact, it might have been a little too dark. Some areas were so dark that it was difficult to see enemies. This got me killed in a heartbeat.

The audio in Technicolour Rain isn’t bad either. The beats are easily entertaining enough to listen to while playing. They have this techno feel to them that’s similar to the music found in Tron Legacy. However, none of them had a memorable enough feel that I would find myself humming them while not playing the game.

Overall, I like what I’m seeing from Technicolour Rain. It takes an already established genre and adds a new element to mix it up and make players think about different ways to play the game. It also has some nice graphics and audio.

Seeing as how Technicolour Rain is still only in its alpha, I won’t be giving it a proper score. Instead, a filler of 2.5 GiN Gems out of five will take its place.

A demo of Technicolour Rain can be downloaded from Sleepy Studios’ website. The demo is free, but the developer is asking people to pay what they think it’s worth.