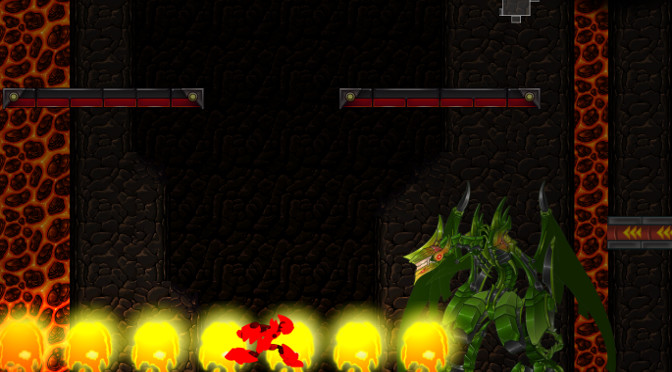 This week I didn’t have to do any searching because John sent me a game that is still in its alpha. That game was Echoes of Eridu.

Echoes of Eridu is an action platformer that plays a lot like Mega Man with rouge-like elements included. It even follows a similar story with robots turning evil and having to be destroyed.

As I just said, Echoes of Eridu is a lot like Mega Man. Specifically the game plays like the Mega Man X series. Players can run, jump, dash and attack. The easiest way to do this is with a controller, but the game also allows people to play with a keyboard.

Nina has a blaster canon on her arm. Along the way she can unlock new canons that give her different types of shots. Ace carries a sword. He can also unlock new weapons to use, like one that gives him dual blades.

In Echoes of Eridu there are several different secondary weapons that can be found. There are some secondary weapons that just do damage and others that affect the game in a certain way. One of these weapons can stop time and the other is an alchemy ability that allows the player to randomly change what an item is. In Eridu’s current build these can break the game (I’ll explain in a second).

There are also upgrades that can be picked up to give players a boost. These boosts only last so long as the player doesn’t exit to the main screen or close the game. Examples of upgrades include increased dash, more damage, additional jumps and reduced energy cost. The problem with these upgrades is that they stack and there is no limit on them.

Here is where we get to the fun part of my experience with Echoes of Eridu. Stacking upgrades can easily make the players invincible. While playing the game, I picked up so many upgrades that I was blasting through levels by rapidly hitting the dash and attack buttons. Nothing stood a chance and if I ever came to a section that required platforming I just skipped over it with my extreme speed and quintuple jumps. I was easily clearing levels (bosses included) in under a minute.

This isn’t where the ridiculousness ends. Remember those two secondary weapons I talked about earlier? They make it even easier. Picking up upgrades that reduce energy cost will make it so that the player eventually generates energy instead of using it. This can be used to spam the time stop ability infinitely. Making it even more broken is the fact that this ability works on bosses and makes them easy pickings.

The energy cost exploit also allows players to infinitely change what an item is through the alchemy ability. This lets players collect lots of gold bolts for use in the store. In turn, this also allows the players to continue to buy upgrades after every level, which makes the characters even more overpowered.

Like I said above, Echoes of Eridu is in its alpha. I’m not really holding this exploit against the developers. However, I do want to make sure they know that it’s in the game.

Echoes of Eridu also features two-player co-op. This is a neat idea, but I think the developers need to focus more on the fundamentals of the game before focusing on co-op.

Let’s talk about Echoes of Eridu’s gameplay when the characters aren’t taking steroids. First of all, the game is way too easy. Falling down a bottomless pit doesn’t kill the player and instead only deals one point of damage. Bosses also don’t deal much damage. The first couple of times I fought a boss I acted like it was a Mega Man game and dodged around to not get hit. After a couple of fights, I realized just how little damage bosses did and that it’s much easier just to take the hits and continuously attack them.

I also found that Ace is much easier to play than Nina. He has a huge arc on his sword that makes it easy to attack enemies above or below him and he also deals more damage than Nina right from the get go. Sure, Nina has more range, but she also has to stay on the same level as an enemy to attack them. This is a huge disadvantage. I feel like allowing her to angle her shots up or down might make the two a bit more even.

I ran into five different bosses while playing the game. There could of been more in the alpha, but I don’t know because they are encountered randomly. Of these bosses, only two were unique. The other three were just lager versions of normal enemies with more health and wider attacks. I did like the two unique bosses, but as I sated above, they were easily beat by just attacking them head on.

Echoes of Eridu also sports rouge-like elements. What I mean by this is that the game has randomly generated levels, sort of. The levels only really feel semi-random. This comes from the fact that the game runs off of the Mega Man design of the start of the level being to the left and the boss being to the right. It doesn’t leave much room for random generation because players always know which way to head.

Another issue with the levels is how some of the platforming sections are set up. There are areas in the game that require players to jump on blocks that come in and out of existence. The only problem with these parts is that most of them can easily be avoided with wall jumping. Other parts of the game that are designed for pin-point platforming fall prey to the same issue.

The graphics in Echoes of Eridu weren’t bad. Most of the enemies were really interesting looking, including the bosses. The game was also filled with a lot of anime and game references. I actually didn’t like this because the game feels like its going for a more original idea. All of the references just felt like it was trying to ride off of nostalgia and nerd culture.

Another issue I have with Echoes of Eridu is the character designs. Nina is red, which is enough to make her look less like Mega Man, but Ace is also red, which makes him look almost exactly like Zero. I also have an issue with the placement of Nina’s arm cannon. When running and shooting (the two things most done in the game) she holds the cannon right in front of her face. Blocking off the face of the character makes it hard to remember what she looks like and certainly won’t leave a lasting impression.

One thing I don’t have a complaint about is the music. The game has a rock soundtrack that reminds me of the Mega Man games in the best of ways. There was only a single track, but it was really fast and energetic. This fit perfectly with the style of the game.

Overall, I like what I’m seeing in Echoes of Eridu. I know my review/preview may not make it seem that way, but I really do. It has a solid concept and gameplay, but it just needs some tweaking to really make it shine. Most of the issues, such as the stacking upgrades and lack of damage from bosses, are minor fixes. It also has some awesome music and creature designs, but it could do with some more recognizable characters.

With how early in alpha Echoes of Eridu is, I don’t know if I can feel right giving it a proper score. I am still excited for it, but I’m going to give it a middle of the road 2.5 GiN Gems for now, just as a filler.