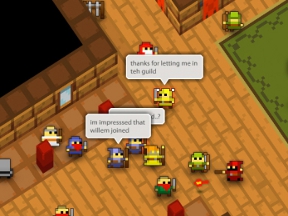 Realm of The Mad God

This week I spent a lot of time in the Realm of The Mad God! No, this isn’t an expansion for Skyrim that goes back to the world of the Daedric prince Sheogorath. Realm of The Mad God is instead a run-and-gun MMORPG. Yeah, I know it sounds weird but just roll with me for a minute.

Realm of The Mad God features 13 different playable classes. We start off as the base class: Wizard. After a short tutorial we are dropped into a world filled with monsters, caves, loot and other players. The whole idea for obtaining new classes is to level up other classes in-game. It’s a bit of a twist on the normal MMORPG but with Realm of The Mad God it makes the game unique.

The real reason the game stands out for its character classes isn’t actually the classes. In fact all classes have the same basic attack: shoot a projectile in the direction of the mouse. The only real difference is the range and power based on the classes. Every class does have a special attacl though. The specials really help to setthe classes apart in Realm of The Mad God. When playing as a Warrior our special is to boost the attack and movement speed of all other players around us. It’s a great ability for group battles and makes a warrior a must have in late game boss battles. The Wizard’s special on the other hand is more upfront by sending an explosive spell to wherever the mouse is located. It’s strange to think that such simple changes in character can effect the battles but it does.

The level cap in Realm of The Mad God is 20 which may seem kind of short but frankly that works perfectly for this kind of game. It only takes about an hour to reach level 20 but after we hit 20 we unlock a new character class…or part of one at least. At this point we have two options as to what we want to do with this character. We can either keep the existing characters and buy an extra slot to start a new one or we can kill one so that we can start a new character. I’m a fan of killing off my characters once I reach level twenty with them (One thing to note though is that once a character dies they are gone for good). This is one thing that makes Realm of The Mad God different than other MMORPGs. Normally you put your life and soul (sometimes quite literally) into making a character and spending endless hours perfecting them. Realm of The Mad God instead awards us for not keeping emotional tethers to our digital personas. Probably the strangest thing about this style of gameplay is just how much satisfaction there is. Because of the fast paced nature of the game finding epic loot or killing a major boss still gives that feeling of "Dang, that was awesome".

Graphics in Realm of The Mad God are quite classic looking. The world, creatures and you are all rendered in beautiful 8-bit. Yet again this isn’t something that I really expected out of an MMORGP. Sure MMORPGs usually have weak graphics in comparison to other game genres but with Realm of The Mad God it just feels right. Maybe it’s the simplicity of the class system combined with the classic nature of the world that takes me back to the early days of Final Fantasy but the two really come together and complement each other.

Audio is in the same vien as graphics with classic 8-bit sounds. Some of which I’m sure I know from a specific game or two but just can’t seem to put my finger on. To be fair though the sound was very limited back in the day so multiple games had the exact same sound effects.

Realm of The Mad God is a great way to waste some time. In fact the only problem I really have with the game is that it may just be to dang addicting. Plans easily get shoved to the side when a Skype call with friends and Realm of The Mad God are involved and it left me with a pile of work to be done. This is easily the best disadvantage a game could ever ask for though.

The classic gameplay and graphics in Realm of The Mad God comes together with the MMORPG genre to create a wonderful game that is likely to waste more of your time than some of the big budget games out there and did I mention it’s free?

Realm of The Mad God levels its way to a perfect 5 out of 5 GiN Gems!