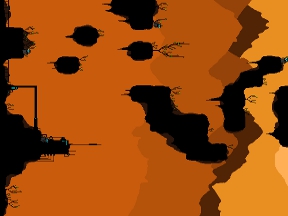 It may be a Tiny Dream, but it’s definitely a lot of fun. I wasn’t sure what I was getting into while looking through the games on the front page of Newgrounds, but once getting to game choice number three, I finally found something that I felt deserved to be written about.

Tiny Dream is a simple, pixilated adventure game that has you navigate its terrain in order to find keys to unlock four doors that block your path. Think of it like a scavenger hunt. Your only controls are the WASD keys or the arrow keys (like I said: simple). But don’t think that the lack of doing anything else other than moving around is in any way boring. Nope, this game switches it up on you by making your terrain change direction but your movement keys stay the same. Don’t worry, your mind will get used to the D key moving right one minute and then ‘left’ the next, and your W key making you jump up before your next terrain makes you jump ‘right’ and then ‘down’.

The graphic style of this game, as I mentioned before, is pixilated. It’s nothing that fancy, but there’s enough detail to let you know what you can walk on, what you can interact with, and where you are in game. Where a lot of games have you playing as some special or more detailed character, this time around I had no problem with being a tall black blob with a blue face: it fit with the game just fine.

How about I talk about story and music? Well there isn’t much music to be frank: just one track that’s on a continuous loop. But it’s just a background ambience, and a nice one that fits the style of the game at that. It’s one that sets the mood, and it works perfectly for a short, simple game like this one. The vibe I get from it, combined with the previously mentioned art style, can best be described as creepy, since while playing there was this small unsettling feeling at the back of the mind; like there was something more waiting for me and making me want to dive deeper.

Now, the story unfolds as you go as you talk to other little pixel people that inhabit the world you’re walking through. I found myself becoming very curious about this Edgar character who gets mentioned from time to time.

In the end, Tiny Dream was a fun few minutes of my time that I’m really happy to have stumbled upon. It offered the atmosphere I’m sure it was trying to achieve: a feeling of uncertainty and a desire to keep playing just to find out what was going to happen next. It ended on a good note, which makes me hope that someday (hopefully soon) there will be another Tiny Dream for me to enjoy. Personally, I found nothing wrong with this game, and I hope you guys will have as much fun with it as I did.