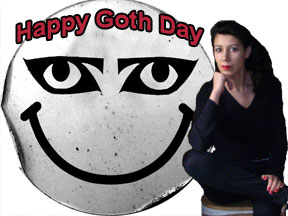 Tuesday was World Goth Day, which is a time when Goths get to step out of the shadows and celebrate their subculture loud and proud. You can ask any goth what it’s all about and you’ll get 10 different answers, ranging from ‘it’s spiritual’ to ‘I like bats’ or ‘black is slimming.’ It doesn’t have to be about lashings of eyeliner, a penchant for Aubrey Beardsley and dressing like an Anne Rice reject, but it helps.

I took WGD as an excuse (not that I need one) to play Sisters of Mercy and a bit of Bauhaus on the sunniest day of the year so far. It also got me thinking about goths in games. I was going to do a top ten goth game characters, but I struggled to come up with more than a few, which surprised me.

Goths are largely unrepresented in games. You get the odd moody chick with tattoos and a leather corset, but it takes more than that to tick the boxes. I think games need to get their goth on and devs should be looking for inspiration from Poe, Lovecraft and Gormenghast to give us something new. We want big black hair, paler than pale skin, black lace, buckles, top hats, ravens and black cats, but all to a cool Fields of the Nephilim soundtrack please.

Failing that, I’ve come up with 10 of the best games for Goths.

10. Killer 7 ‘ this Suda 51 game features a girl in a blood-stained nightie, a guy in a gimp suit, as well as leering zombie-type things and the most unsettling storyline since Twin Peaks. This is nouveau goth at its best.

9. American McGee’s Alice ‘ this is probably the most goth of all games. I mean it’s Alice in Wonderland, but with a knife-wielding psycho Alice, a whole lot more blood and a basket load of crazy.

8. Final Fantasy VII ‘ now this may seem a bit leftfield, but Vincent Valentine is the ultimate moody goth character. He’s got long black hair, he’s dressed in black with pointy shoes (de rigeurtrad-goth attire circa 1980), a cape the colour of blood, and he doesn’t speak, unless it’s to say something poetic and cryptic. None more goth.

7.Devil May Cry ‘ Dante’s name alone makes this qualify for the goth award, but he also looks really cool, with his shock of white hair, bare chest and red, leather swooshy coat, while he runs around in castles, exterminating demons. I mean, need I really say any more?

6.Grim Fandango ‘ okay, so it’s got skeletons in ‘ that’s goth points right there. But Grim Fandango, also gives us alternative noir and if there’s one thing goth stands for, it’s alternative. It’s all sort of Mexican Day of the Dead with a light-hearted point-and-click twist, which sends it right up goth alley.

5. Castlevania ‘ well, it’s set in Dracula’s castle and the main character is a vampire hunter. If that’s not goth, I don’t know what is. Nuff said.

4. Silent Hill 2 ‘ for goths who like the full horror, nothing says it better than a night in with Konami’s fright fest. The first Silent Hill game had the creepy girl sitting on the wall, but for me SH2 has the edge. It has the fog, the lake, the blood-stained hospital and the whole mind warp that is Maria, who looks like the hero’s dead wife Mary, but isn’t’or is she?

3. Lollipop Chainsaw ‘ new for 2012, this game gives us Swan, an evil doer who is basically Marilyn Manson on acid, and that’s a scary thought. Complete with pinstripe suit, mismatched contact lenses and no eyebrows, Swan falls into the goth-as-evil-ne’er-do-well. Okay, so it’s not the most positive representation, but it’s all in the name of tongue in cheek fun, so no harm done.

2. Vampire the Masquerade ‘ VtM is the original pencil and paper RPG for goths, so no list would be complete without the video game version. This is enough to satisfy all those vampire fantasies and then some.

1. Bioshock ‘ a surprise addition to the list perhaps, but the lush art deco styling, scary little girls in Victorian dresses and overwhelming sense of impending doom make it goth enough for me. It may not be traditional vampires, graveyards, lace and roses, but its gothic horror and it’s a bloody good game.

So I hope you all had a happy World Goth Day, so show some love to any goths you meet, and invite them over for some gaming on the dark side.