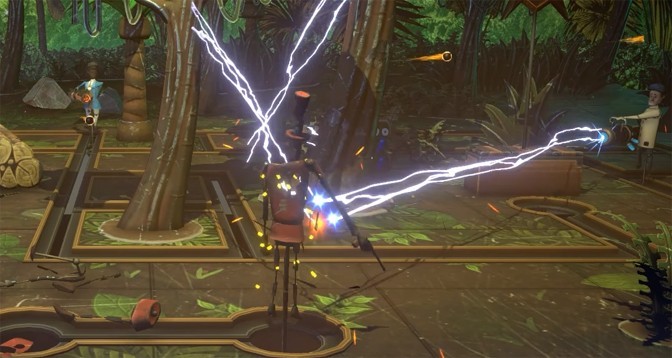 Salutations Gamer fans! It’s another fabulous Saturday in the cold of winter. I hope you all are snuggled under some blankets and have the fireplace going with some popcorn. Cause this game is rocking it! Get ready for Bartlow’s Dread machine! This game has got so much good content in it, you should be playing this one for a long time.

First off, Bartlow’s Dread Machine is absolutely gorgeous! It’s modeled after one of those old time penny arcade cabinets of yesteryear, but of course had modern levels and mechanics that no old machine could ever dream of containing. This dichotomy is presented in an absolutely gorgeous fashion that you need to see and play. 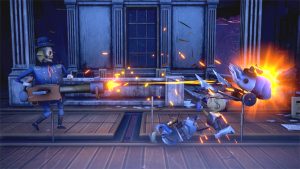 The game is set in the time of Roosevelt’s presidency back in the 1930s. The opening scene begins by zooming into Bartlow’s Machine of Wonders in this old warehouse. As the opening plays, it turns out to be an old arcade shooter game. What I mean by that is, it’s a game machine from the electric age. So it’s it got puppets with guns that travel through an old metal maze in the floor. Yes, you read right! It’s pretty amazing.

When you first make your character you have male and female choices and four look choices. There are several famous people that you can become as well. Then you can select how easy or hard you want the game to be. (guess what I choose) You also have multiple save slots for your progress of course.

Our story unfolds in good old Roosevelt’s era. They’re celebrating his presidency and you are in the secret service helping to keep an eye on things. You head to the right and see that one of your fellow agents on the ground dying. Before he passes, he tells you the president has been kidnapped by Anarcho-Satanists. So it’s up to you to save the president!

This game is unlike anything I’ve ever seen in my life, you guys. It’s a whole new level of genre. It’s electric puppetry, with RPG like scenes! Then there’s the guidance system, it really is a metal maze. It’s genius! But the best part is shooting! 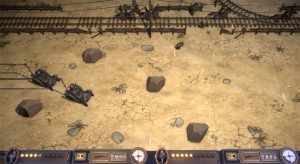 Yes, you can shoot your enemies, and because it’s puppets there’s no blood. It’s like going to the carnival and shooting targets. But your character has more shooting abilities than just plucking targets straight ahead. You can move everything around with your mouse or control pad, making Bartlow’s Dread Machine a true twin stick shooter.

Even better is the co-op shooting where you and a friend can play together. The scenes in the background change with appropriate sets just like a movie. It’s just so incredible. There are even scenes where you are in a zeppelin or driving one of those newfangled cars. 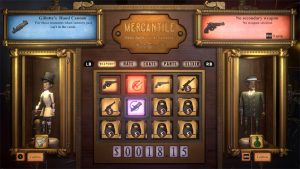 Oh, and once you’re done with a level you have options to purchase items from the game’s store, so there is some role-playing and character building parts to Bartlow’s Dread machine as well. You can upgrade your gear, buy elixirs, weapons and ammo from the store, or just get yourself a new hat and matching coat to really compliment your wardrobe. 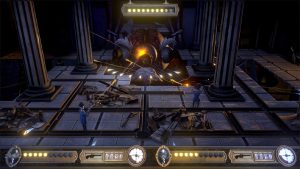 Don’t forget we have some exciting news about streaming games on Twitch. We plan to have a new game every week to be played through each week! Time is still being decided. But don’t worry we’ll have it all hammered out by the end of the month for sure! Again this in the works and is being worked on as we speak! So stay tuned on Game Industry News with me, the Modern Gamer.