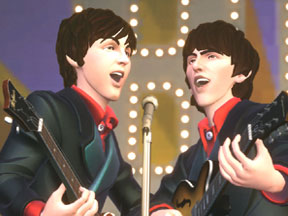 I’d say that Beatles fans are in heaven today with the release of The Beatles: Rock Band, but that’s a given. Surprisingly, even non-Beatles fans will probably be tickled with the new game.

My wife is the hardcore Beatles fan in our family. She’s got posters, album covers and even an autograph or two from The Fab Four. And she thinks I’m the luckiest guy in the world because I’ve had The Beatles game for the PS3 for about a week now. But really, I hate to say it, I’m not that great of a fan. So it was with some surprise that I found both of us really enjoying the game, which pushes the limits as to what a music and rhythm title can do.

The game follows all the normal Rock Band rules except that it follows a single group, The Beatles, from their humble beginnings eking out a living playing The Cavern Club all the way to superstardom playing Shea Stadium and on into their Sergeant Pepper and Abbey Road albums.

The game has the feel of a standard Rock Band title, but with a little bit more stylized 1960’s type graphics instead of the more modern colors and straight lines found in Rock Band and Rock Band two. As you play, The Beatles will sometimes dance and sing in the background with the animated characters looking both realistic and cartoon-like at the same time. Some of the scenes are straight concerts or television appearances like when they played The Ed Sullivan Show and some of them are pretty psychedelic with vivid colors that reflect the times. Some of my favorite animations are when you start out in a studio playing a song and think that will be all that happens, when all of a sudden, once the music gets going you are taken from there to a magical world down under the ocean or up in the sky (with diamonds). For a hardcore fan like my wife, she found it hard to concentrate on singing or guitar playing or drumming because she kept wanting to watch the videos. They are really well done.

Like most Rock Band games, you can drum, play lead guitar, play bass or sing. However, singing really takes the stage here because the game introduces three part harmony for the first time. And it’s really cleverly done too. Basically you just connect up to three microphones and then select harmony as your choice (as opposed to solo). Then when the song starts, the lead vocals are listed along the blue line while the harmony parts are orange and brown. Anyone with a microphone can sing any part, but if you assign people to work harmony, then you not only sound amazing but can get double fab or triple fab points. In fact, singing is probably the easiest way to earn five stars on every song, as the double and triple harmony scores really add up. However, you really have to have either a musician or someone with a good ear to sing harmony, because it’s not the lead part you think of when you sing a song. The Beatles were masters of harmony and many bands have tried to mimic them over the years, but it’s not so easy. But if you can do it, the points will follow. It also means the game can be played by six people at the same time, a new record for music titles and a huge boon for any party.

On the stringed instrument side, you have both guitar and bass to play. For each song you choose, you are shown a meter that says how difficult it is for each instrument and vocal. Surprisingly, with The Beatles the bass parts are often harder than the guitar ones, which any Rock Band player will know is almost never the case. But given that we are talking about Paul McCartney on bass, this is probably to be expected. He really pushed the bass player up to the front of the band, and The Beatles game will push your favorite bass player too, or at least wake them up a bit. No more Green, Green, Green, Red for an entire song.

If I was disappointed with any aspect of the game, it was the drumming. One of the coolest things about Rock Band over Guitar Hero is the drumming rifts that let the drum player add their own signature to a song or really go wild. Sadly, this feature was left out of The Beatles game, probably for historical accuracy. My Beatles fan wife tells me that Ringo didn’t do any type of drumming rifts until very late in the band’s history. Given that at the back of the instruction booklet there is a note from the developers basically apologizing for little liberties they had to take to make the game (Paul screams at the beginning of the Revolution promo film instead of John – gasp – plus no fiddle in Hello Goodbye). I guess asking for drum solos would be out of the question. Still, I think it would have made the gameplay more fun for me as a drummer instead of being a fancy metronome. Come on, Ringo would agree with me! I’m taking a half a gem off of the gameplay score for missing this one, though it won’t affect the final score because everything else is perfect, so no angry Beatle fan letters, please.

Of course the star of the show is the music, and it doesn’t disappoint. All the favorites are there like A Hard Day’s Night, Ticket to Ride, Drive My Car, Lucy in the Sky with Diamonds, Hey Bulldog, Helter Skelter, Twist And Shout, Can’t Buy Me Love, Eight Days A Week, Yellow Submarine, Revolution, Sgt. Pepper’s Lonely Hearts Club Band, Taxman and my favorite (for personal reasons) Paperback Writer plus a ton of others are all included. It’s amazing how many hits one band produced. But you will also get a lot of their lesser known songs like Dig A Pony, And Your Bird Can Sing, I Wanna Be Your Man and "I Want You (She’s So Heavy)."

Unlike most Rock Band games, you don’t get to buy or change the outfits on the stars here, but you do earn some pretty cool rewards. Each time you play a song and get five stars, you unlock some really cool photographs. If you get less than five stars but still do well, you can normally unlock one snapshot. Photos come with text that gives some neat facts that I for one didn’t know about the band. I think one or two might have even stumped my mega-fan wife.

When you unlock enough photographs, you earn a special reward like a video clip of the guys practicing at the Ed Sullivan theater. If you think George Harrison looks a little disoriented in that clip, he probably was because he was about to head into surgery for a tonsillitis. I especially liked to listen to The Beatles Christmas greeting (the first unlockable) that was mailed out on a plastic record to their fans in the early days. I never heard it before and it was fun to hear how much fun the guys were having back then before they became huge stars. I swear they sound like little kids having fun with their father’s recording machine. All of the reward videos were interesting and worth unlocking.

So we have already talked about the fact that six people can gather locally around their console and play together, making this one of the best party games on that fact alone. But not everyone has that many people over to their home on a regular basis. Not to worry, because you can play online. Unfortunately, because I was reviewing this game a week before it officially launched, I couldn’t test this aspect out since there were no other players just yet. But after the launch, my guess is that there will be thousands and thousands of players. And, a cool feature called Leaderboards will let you look and see who is the best in the world at the time with various instruments, and who has scored the most points.

The Beatles Rock Band not only brings a fantastic catalog of music to the game world, but also breaks new ground technologically – adding more players and true game harmonies. Like the band the game is based on, everything about this title screams quality. Whether you are a hardcore Beatles fan, someone who likes to play Rock Band, or even just thinking about getting your feet wet in music and rhythm games, The Beatles Rock Band is a perfect choice. And trust me when I say it will crank up your next party. It earns a very rare perfect 5 GiN Gem score, and not just because my wife is standing over me holding a very heavy Beatles bass as I grade the game.