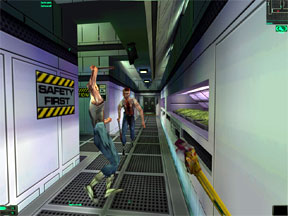 You can’t go home again. This is what author Tom Wolfe wrote, and it obviously rings true for many as it quickly became a cliche. But perhaps, just maybe, it’s not quite as true for gamers. I am not speaking of going home in the literal sense of course, but the metaphorical returning-to-a-much-loved-place meaning.

Video games exist as 1s and 0s, and as such they enjoy a certain atemporal quality – and in this specific case, back in February the folks at GOG.com took advantage of this fact to bring back one of the most influential video game titles ever: System Shock 2.

This was no mean feat, by the way. It’s a story that involved wading through a tangled web of ownership and corporate bankruptcy, but the outcry to bring this game back from the dustbin of history was strong. In fact, it was the most requested game on the GOG.com wishlist, garnering more than 35,000 votes to make it available again. That’s really sort of amazing for a game that sold less than 60,000 copies in the first eight months after its release.

If you’re interested in more information about the development, release and history of the game, I would suggest checking out the Wikipedia entry on it. But we have a more pressing question: how does it play?

Now GiN’s Todd Hargosh reviewed the game back in the so-long-ago-it’s-nearly-mythical September of 1999, and that review captures a great view of how the game played then. But this many years on, how does it hold up? Is it worth your $9.99 to play a game this old?

In the spirit of bringing new life to old things, I tested this on my newly rebuilt circa-2008 Alienware Area 51, which had just been brought up to the current state of the art with new motherboard, SSD drive, processor, RAM, GPU, etc. — basically playing this game on this machine is like heating a cup of tea using the Large Hadron Collider.

While Todd’s original review noted the game stutters some even on high end systems, even my original Alienware build would have run this without a hiccup. But it was nice to see that it truly ran without a hitch under Windows 8 on modern hardware. And as you might have figured, this is only available for Windows (it was released in the 90s after all), but your search engine of choice will lead you to some help on porting to other operating systems.

Now my first impression of the game, which I hadn’t played since its original release, was “THIS was what we thought looked good back then?!” Even the cutscenes were poorly rendered. This is not a remastered, HD version of the game, but the game in it’s original form with just enough patches to run on modern systems. I had a momentary worry that this was not going to be good. Those concerns quickly quieted though as the gameplay started off.

If you were a gamer back in the late 90s, you probably remember what most FPS gameplay was like back then. Other than Half-Life, which debuted in 1998, most games had no such thing as narrative, story arc, or plot. System Shock 2 definitely has those, and because of its role-playing aspects, it offers a more nuanced, personal style of play. The game also starts off with a helpful training session introducing you to the different skillsets and important items in the game. These type of tutorial levels are so often done poorly, it was refreshing to see a game this old handle it so well.

I have noticed whenever there’s a discussion of the evolution of gaming, System Shock 2 always seems to get mentioned. And as I played, I was reminded of all the reasons for that. Personally, one of the things that always stuck with me was how weapons were handled. Non-melee weapons could not only be enhanced or “hacked” in the parlance of the game (with the proper skill levels of course), but they also degraded over time and would randomly break – either requiring you to drop it and find another, or if you had the skills, try to repair it.

I personally loved this feature – it added both difficulty and at least some sense of realism to the game for me. However, it was found irritating by many and even members of the development team expressed regret over how it was handled. The lack of ammo for weapons has also been often cited as something that made this game especially hard, but again, I thought it made for a much more interesting game. Games today often make finding ammo as easy as turning around. (Now get off my lawn!)

The weapon degradation though is definitely something I wish had caught on more. Just imagine how much of a continuing challenge something like Skyrim would be if, after crafting and/or enchanting some weapon, you had to occasionally see to its maintenance. I certainly think that the timing for weapon degradation would be useful in setting difficulty levels in games.

Of course, one of the big tests for this replay was did it still have what it takes to scare the hell out of me? When talking to people who have played the game, the horror and suspense of the game play is almost always mentioned, and I was a little skeptical it would hold up. After all, I was a young, wet-behind-the-ears twentysomething back then. Well, my now jaded, middle-aged rear was still on the edge of my seat as I played, and the suspense/horror aspects still had the ability to shock and surprise me. Aided by the game’s soundtrack and sound (both of which hold up surprisingly well), the game creates a distinctive, immersive environment that keeps you engaged.

Having played a great many more games now than I had almost 14 years ago, the sparseness of the game environment definitely stood out for me. Of course, with the notoriously tricky enemy spawning, those “it’s almost too quiet” moments are more often than not interrupted by a monkey attack or an alien hybrid coming at you with a weapon. But walking through the deserted-but-by-no-means empty corridors of the spaceship Von Braun remains a tense endeavor.

And that’s what the genius of this game comes down to — the game environment. Not only the alien-infested spaceships your character is investigating, but the environment it creates in the player’s mind. With unreliable weapons that may fail at any time, little ammo, and enemies all around, you are mentally there in the situation, not viewing it as a cool, collected observer.

In another cool bit of happenstance, and another shout-out to the idea of everything old is new again, while playing System Shock 2 for this review, I was also playing through Irrational Studio’s Bioshock Infinite. Now the original Bioshock was referred to, by its developers (Irrational, in one form or another, created both games and Bioshock Infinite), as a “spiritual successor” to System Shock 2.

Back in the late 1990s, the game industry was but a faint shadow of what it has now become – after all, System Shock 2 cost $1.7 million to develop and it’s estimated that Bioshock Infinite cost as much as $100 million to develop plus about the same amount for marketing. Games back then had more freedom to push the envelope in all directions, like System Shock 2 did at the time. There were experiments. There were mistakes. And few games before or since succeeded with as many new ideas as SS2 did.

The DNA of System Shock 2 remains strong in all of the Bioshock series, especially in the area of creating an immersive and emotionally engaging environment. Whether it’s the creepy undersea world of Rapture, the floating city of Columbia, or the decks of the Von Braun, these games all manage to sink hooks into you by creating an emotionally-charged world for you to investigate. To get some glimpse of the creepy goodness of the game, I strongly recommend you watch the trailer for the GOG release of the game.

The fact this game still works on that emotional level, despite it’s primitive graphics, speaks to how well put together this game was originally. And it’s primarily for that reason that I give this a solid 4 GiN Gems. At $9.99, it’s a decent bargain. Other than the graphics, it still has almost all the entertainment value it originally offered and holds up remarkably well. And now it has the added bonus of being part of gaming history. How often can you roll back history and see where something started?
Oh, and for those who’d like to play System Shock 2 with better graphics, better music, or other tweaks, there is a revitalized and robust mod community that probably offers exactly what you are looking to find.