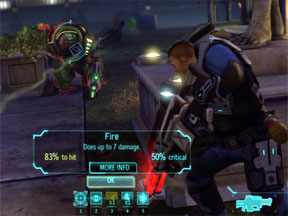 The original X-COM: UFO Defense is one of my favorite games of all time. For a game released back in 1994, it had more depth than any title I experienced before. It had the resource management and productivity of Civilization combined with the turn based tactical combat of Jagged Alliance. Add to that a level of customization that allowed players to make up their own stories, and it was the markings of a winner.

It was this level of depth that I wanted when I heard that XCOM was making its true return to its roots with Enemy Unknown, and for most of its effort, Firaxis succeeded in following up on the Gollop Brothers’ masterpiece while keeping the series fresh.

As with the original XCOM, there is no deep backstory. We see the early stages of the alien invasion, followed up with a speech from the leader of ‘The Council,’ consisting of 16 nations, to enforce the XCOM Project. From there it is up to the player, known only as ‘The Commander’ to build up an army to fight back against the invaders.

Following up on the original, the game consists of two parts. The first is the Geoscape. In it, the management of the XCOM Base is key. Important functions include research of the aliens (both dead and alive) and their technology, engineering of weapons, technology, and base facilities, barracks (customizing of your soldiers, all the way down to the nickname they go by,) hangar (distribution of your ships across the key continents,) and the Situation Room, which keeps track of the funding nations, inventory that can be sold via the Gray Market, and any possible item deals that can be done with member nations.

The tech tree in XCOM is quite deep for a console reboot. While Civilization Revolution is far from being a bad game (in fact, it was quite good,) I felt the tech tree was quite limited only to make the game play quick. XCOM by contrast has plenty to research and keeps the game entertaining. It helps show that a PC original game doesn’t have to be dumbed down to still be good.

Keeping an eye on the Situation Room is key, as it is important to keep your nation’s under control. All of them can end up in a state of panic. If a nation’s panic level goes into the red, there is a high chance they will withdraw from the Council. If eight nations withdraw, as shown via a set of red lights known as the ‘Doom Tracker,’ the Council will terminate the XCOM Project.

Thus it is important to keep track of alien activity. From Mission Control, activity such as UFO interceptions, terror missions, and alien abductions are reported in. This is where the soldiers go to work. When a mission starts, a strike team of four soldiers, which can be upgraded to six members, is dispatched to the affected area. From here the game switches to the Battlescape mode.

A lot of people would complain about lowering the number of soldiers to a maximum of six, especially considering the original X-COM had teams of up to 26 soldiers. But in the end, it speeds the missions up without worrying about too much micromanagement. Each soldier can perform two actions per turn, or more with certain special abilities, in which they can move and then perform an action, or ‘dash’ to a further spot. Turns can also be held by performing an ‘Overwatch’ to counterattack during the aliens turn. Again this makes the game faster by taking away the micromanagement done with the original’s time units.

Combat is exciting and tense. It really does bring back the suspense of the original. Do you take your time and prepare for any counterattack? Do you rush to a distant piece of cover? Do you risk taking a shot with a low 20 percent chance of hitting, or save the shot for a reaction? Do you fire a rocket at the looming Sectopod in front of you, or save it for something even worse? These are the risks that you face during the combat, and the intensity never stops.

When starting off, your soldiers are armed with simple body armor and projectile weapons, but as the research and engineering kicks in, they can easily turn the tide with heavier armor, plasma weapons, and even go as far as psionic warfare. However, I felt that this time psionic warfare was much easier to perform. In the original X-COM I was never able to get my soldiers to succeed with mind control. But now, every time I did it, it was successful. But also, of all the soldiers I had in my barracks, only one of them had psionic abilities.

In addition to these missions, special Council requests can come in. These are in the form of bomb defusing, hostage rescue, or asset recovery. The rewards in these missions are worth the risk, as they can lead to more scientists/engineers/soldiers, funds, or more importantly, panic reduction.

XCOM is most loved for its vast customization, and the new game doesn’t disappoint in that. Aside from changing the soldier’s names or physical appearance, they can be designated as one of four different classes, assault, heavy, sniper, support. Assault classes can attack after performing a dash, snipers are best at long range attack, heavies can equip rocket launchers, and supports can heal comrades. From there, promotions can earn soldiers extra perks. For instance, the Double Tap perk allows a sniper to perform two quick shots, and the Revive perk allows medics to revive a fallen comrade. Considering the force reduction from 26 soldiers to only six, this allows more of a sense of role playing that might affect the mission outcome.

Sadly there were some elements of the original that were not brought back to the remake. For instance, there is only one XCOM base to operate from. To replace the lack of other bases, surveillance is obtained by launching satellites over the other nations, and they need to be protected by interceptors that are dispatched to various continents. I miss having two primary bases on each side of the globe. Also, because of only having one base, there are no base defense missions. It would have been great to do missions on the same base that I built, like I could in the original.

Also there is not much of a variety in terms of council missions. Aside from bomb defusing, rescue and asset recovery, I wish there was more. However, upcoming DLC is supposed to resolve that.

There are those who complained about the game being short, as they only went through all the priority missions and were playing it on Normal difficulty. I too played in Normal, but I took my time to build up my troops’ abilities and get all the research, and still ended up playing a decent 20+ hour campaign. But the difficulty can also be upped to Classic and Impossible levels. Also for those who are truly sadistic, there is also an Ironman Mode option that eliminates saving.

Eighteen years have passed since I played the original X-COM, and the wait was well worth it. I should have known when I heard Firaxis was going to work on the remake, that it would be something special, and it truly is. XCOM: Enemy Unknown proves that turn based strategy games can still coexist in a world of first person shooters and MMOs, and yet somehow, become a strong Game of the Year nominee!

Pros: THIS is what XCOM is meant to be, a turn-based strategy game true to the original. A streamlined experience that still keeps the depth. Long campaign of about 20+ hours on normal difficulty, made longer with enhanced difficulty settings. Ironman Mode for the turn-based hardcore.

Cons: XCOM can only build one base, and there are no base defense missions. Would like more variety in the Council missions, but DLC is on the way to remedy that.