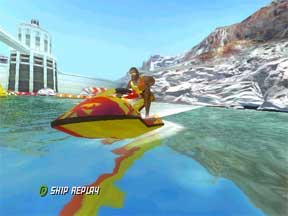 Believe it or not, it is difficult to be a game reviewer sometimes. Oh, it’s true. After all, you see, not every game that comes across our desks is "Grade A" material. In fact, there are some games not even worth a letter grade or number score. In fact, there are times when a game is so bad that it RIPS, CLAWS, and TEARS at a reviewer’s darkside BEGGING AND PLEADING FOR THEM TO SEND THE WRATH OF THEIR ALMIGHT PEN DOWN AND UPON THEM AND WRITE THEM OUT OF THEIR MISERABLE EXISTENCE!!(Urhm…excuse me)

It’s in moments like these that a reviewer must not be swayed to his or her darkside, but instead hold strong to the most sacred of gaming oaths: To deliver gamers the total unbiased truth about new and upcoming game material…..Unfortunately for Global Star and Argonaut Games the truth is gonna hurt.

After subjecting myself to this game for a couple hours or so, I find myself torn between two kinds of truth: The "Sugar-Coated Truth", which comes from what remains of my unbiased nature and the "Painful Truth" consuming my darkside LIKE A RAGING FIRE GROWING HELPLESSLY OUT OF CONTROL, DESTROYING EVERYTHING IN IT’S PATH, REAPING CHAOS AND CARNAGE WHEREVER IT’S FLAMES FALL!!!!…….With that said, let’s move on.

"PRESENTATION" – THE SUGAR-COATED TRUTH: First look and feel of "Carve" easily reminds you of the old "Wave Race" days and I believe that’s the way Global Star and Argonaut Games intended it to be. After all, "Wave Race" was pretty much a big hit with fans of this genre. But let’s be honest, we’ve seen this kind of thing before where one developer makes a hit title and another developer comes behind them and attempts a low-budget spin-off of the game to make a few quick bucks which more than oft ends in an electronic tragedy.

"PRESENTATION" – THE PAINFUL TRUTH: First off, what the heck kind of name is "Carve" for a water-skiing game? I mean when I think of the word "carve," I think of knives, swords, or other sharp objects. I think of a game along the lines of "Evil Dead," "BloodRayne," "Manhunt," or some other version of a blood and gore game. I mean how long did it take to come up with that name? I wonder if perhaps of the members of the dev team had this "great revelation" over Thanksgiving vacation while "carving" the turkey or something. Who knows?

"GRAPHICS" – THE SUGAR-COATED TRUTH: "Carve is less than mediocre when it comes to the graphics department. The first thing of considerable notice is the seemingly "glazed" look that envelopes the scenery distorting the clarity of the game and making the colors seem pastel. Argonaut games attempts to add realism to the game by allowing water drops to form on the screen while you’re racing but it only manages to make things that much more distorted.

A lot of the background scenery in the game shows no signs of life. For example the trees don’t sway in the wind, the sun doesn’t set on the water as you ride to give you that feeling like you’re really there, and my biggest gripe of all is how calm the water stays even while you’re racing over it. There are no ripple effects or any signs of tide activity leaving the feeling of realism almost obsolete.

On the cover of the jewel box I see pictures of colorful jet skis decked out with various cool patterns and logos. Um…just one question. Did I miss something, because what I see in the game is a far cry from what’s on the cover.

There are a total of eight riders composed of four teams of two from all around the globe. There are team "Venta," the American team, team "Tsunami," the Japan team, team "Inferno," I believe to be a German team, and team "Terra" from Russia. The only problem I have with most of these models is you can barely make out their faces and their physical features don’t seem to match their ethnic backgrounds. It leaves you with a weird feeling when selecting a racer.

"GRAPHICS" – THE PAINFUL TRUTH: Let’s face it, this game is a graphical massacre. We got trees that don’t sway, water that doesn’t ripple, environments that don’t fit the locale, riders that don’t look like where they say they’re from, and watercraft that take the shape of a motorized soap box with ski handles. This game’s been beatin by the "ugly stick" all around in the graphics department. Next!

"GAMEPLAY" – THE SUGAR COATED-TRUTH: On the surface Carve is pretty much the same as most other water-ski games. The object of the game is to win tournaments around the globe by competing in a number of multiple lap races.

Winning tournaments will unlock hidden courses and other kinds of watercraft. Nothing we haven’t heard before.

However, "Carve" attempts to be different from the other racers by bringing a slew of trick style moves to the table. During the race you can perform these tricks to access an adrenaline "RUSH" or speed boost. Every time you successfully pull off a trick on the water or off a ramp you get rewarded with a "RUSH" to propel you ahead of your opponents during a race. Linking successful trickstyle moves together as combinations will enable the rider to build up a "DOUBLE RUSH" or ultimate speed boost.

Sounds pretty cool so far right? But trust me, it all goes down hill from here. First off the speed of the game is actually quite slow. I’ve played previous water-ski games where you’re going so fast you feel like you’re being skipped across the water like a rock across a pond. Now that’s intense. The speed in Carve doesn’t make you feel like you’re in the race of your life, but rather it leaves you with the feeling that you’re taking the scenic route on a really fast ferry ride. Not to mention, it makes three lap races seem like an eternity.

Using the trickstyle moves to access an adrenaline "RUSH" seems pretty cool, but surprisingly isn’t pulled off that well. For instance, a lot of the cool trick moves require three and four button combinations to pull them off. This wouldn’t be so bad were it not for having to also worry about maneuvering around the red and yellow buoys to win a race.

Pulling off combos like that and maneuvering around the buoys that are fairly short distances apart just doesn’t fly well at all. Most of the time, the rider ends up in a barrier or going head on with a buoy. Even trying to use the ramp to pull off the big combos most of the time ends in a crash landing because you just don’t catch enough airtime to pull off the trick and reset your position before you land. It’s these kind of setbacks that really take the excitement out of the game.

"GAMEPLAY" – THE PAINFUL TRUTH: There’s nothing remotely fun or exciting about the gameplay here. The game speed is too slow, it’s difficult to execute the cool tricks, and wipeouts occur much too frequently.

On a brighter note though, I can see where this game might be the answer for any insomniacs having trouble sleeping at night. Three laps around the "Pacific" course and I promise you, you’ll be out like a light.

"SOUND AND SOUND EFFECTS" – THE SUGAR COATED TRUTH: Wow…….I must say the sound and sound effects of in this game are really lame. Here’s what I would like to hear in a game like this. When I’m revving my engine at the start of the race, I want to hear my motor growling like it’s pulling some real horse power.

When I take a sharp turn around a buoy I want to hear the water curdling through my propellers and splashing against the barriers. When I catch big air off a ramp I want to hear my engine running wide-open as if it were mechanically yelling at the top of it’s lungs. The want the soundtrack to rock the walls when I turn up my surround sound. I want the music to grab my soul and pull me into another dimension. Unfortunately for Global Star and Argonaut Games , none of anything I just said applies to their game and that’s, so sad.

"SOUND AND SOUND EFFECT" – THE PAINFUL TRUTH: You call that sound?! I could get a better adrenaline rush banging a fork against a tin can! The "flushing" of a toilet would make a better sound effect than most of the ones you’ve included in this title. And where in the heck did you find these music groups for your sound tracks? Percy X? Slam? RNG(Random Noise Generator)? Lego Welt? Jack and Mule? With names like that it’s no wonder your soundtrack is so wack!

"THE BOTTOM LINE" – THE SUGAR-COATED TRUTH: Bottom line is this game doesn’t stand a chance on the gaming market. With nothing good to say about graphics, gameplay, sound, and only a hint of originality, this game is drowning fast without a life jacket. To Global Star and Argonaut Games: Good luck in your future endeavors and please do us all a favor and stay away from any jet ski sequels. Two GIN gems is all I can spare on this title, and that is mostly because as value software, you only have to pay less than $20 for it.

"THE BOTTOM LINE" – THE PAINFUL TRUTH: You want a bottom line? I’d tell you what I’d do if I were in charge of this project. I’d buy jet skis for the entire dev team. Yes I would. I’d tell them to shine those jet skis up real good and fill’em full of gas. I’d then direct them to the nearest launch ramp. I’d tell those guys to head straight out to shark-infested waters, wait for the gas to run out of those skis and see what happens next!! But that’s just me talking. Two Gin gems and no more is all I see fit to give this title.