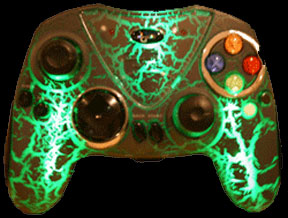 Dreamgear sent GiN a pair of iGlow Xbox controllers for review. The first one was a standard wired S style controller. The second was an S style wireless controller. Both controllers function just as well as the default controllers from Microsoft, but with some nice additions.

First of all the controllers have an interesting "lightning strike" paint job.

And at the bottom of each controller is a switch which turns on the iGlow feature. The iGlow feature is probably the hallmark of the controller really. It makes the controller glow in funky colors. This is a great addition for playing games in the dark, especially during spooky horror games. Play all you want now and not only will you add atmosphere to your game, but also you won’t spill your drink.

On the wired controller, installation is as easy as with a normal controller. The controller does not seem as sturdy as the Microsoft controller however. On the plus side it has rumble motors, a comfortable contoured design and there is a turbo feature.

I do have two negative comments on the unit. The first is that the unit seems very fragile, it probably is not, but I did not want to risk it by throwing it across the room. The second is that it lacks slots for memory cards or the Xbox live headset.

and the same Turbo function as on the wired controller.

Both controllers are a great replacement for the more expensive Microsoft controllers, and that is before you factor in the extra bells and whistles. My favorite feature is the iGlow. I am all about setting the mood when I play, so playing in the dark with the controller lit up is fantastic. I highly rate the controllers and hope they come out with similar models for the xbox 360, perhaps in other colors or less paint-splashy designs.