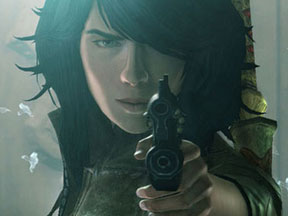 Wet is probably the most stylized title that we’ve seen in a long time. The game is dripping with atmosphere, and feels a bit like a Quentin Tarantino flick. Tarantino films and Wet both borrow heavily from the 1970s-era drive-in type of movie, though younger players will probably only know the style from modern movies like Kill Bill. But you get the idea.

Wet centers around the very cool character of Rubi Malone. She’s an assassin and probably a psychopath, but you will fall in love with her as the game progresses. Kudos to developer Artificial Mind & Movement for making her realistic in terms of her looks. Rubi is awesome, but she’s not an artificial babe like, for example, Lara Croft. She’s thin and perfectly toned, but not really gorgeous in a model kind of way.

Eliza Dushku provides the voice for Rubi, and boy, does she have a dirty mouth. She drops the "F" word into almost every activity from opening a door to opening up some countless minion with her sword. But the voice fits the character perfectly, which makes the game more realistic, at least within reason given some of the stuff you’re doing.

The game has its own version of bullet time, which you are all familiar with from games like Max Payne or John Woo’s Stranglehold or movies like The Matrix. However, in most games, bullet time is a resource that needs to be carefully spent at the right moments. In Wet, it’s essential that you use it as much as possible. Thankfully, it’s given in unlimited quantities.

The way Rubi fights is that standing still she’s pretty weak. She fires a single gun extremely slowly and doesn’t do much damage. But if she is jumping or sliding across the floor, she goes into bullet time slow motion and can fire two pistols faster than most machine guns can belch out lead. She’ll even aim the second gun for you, so you can take down enemies standing in the old seven and ten split position. So for most of the game, you are going to be running around, jumping and sliding and doing everything you can to enable slow motion. Do that, and the bad guys will tumble like matchsticks, like any good gangster flick. The game puts plenty of ramps, poles and railings in convenient places so you can trigger that effect easily.

There are four basic types of gameplay that make up this mostly linear shooter. The first is the standard running around found in other shooters. You run down a street or a hallway and bad guys pop out of alleys and balconies and doors. You simply need to trigger a slide or a jump to get the upper hand, unleash a hail of lead, and repeat.

The second type is the arena combat. Rubi will enter a closed off area like the courtyard in the middle of a bunch of buildings. There will be several spawn points that are shown to you in a cut scene. You need to kill the endless enemies and fight your way to the spawn points, which almost always involve jumping up onto a ledge or somehow getting above the action. You attack a weak area above the spawn point and a heavy sign or door or something will fall down, blocking more enemies from entering the arena at that point. Once all the spawn points are sealed, you kill the remaining bad guys to move on. This was actually the most fun parts of the game.

There are two special modes. One is a rail shooter. In the beginning of the game you will find one where you have to hop from car to car down a busy freeway. Pushing the right button to jump when a trigger flashes or the button to hit with your sword will keep you from dying. This mode is a little frustrating, but generous save points should keep you moving forward, literally.

The other special mode is if Rudi gets splashed with blood or pissed off in some other way. Then she goes insane, the music says as much so nothing is left to chance. The world becomes a three tone color palette drawn from red, black and white, almost like the opening of a Bond film. Gameplay is essentially the same in rage mode, but I found myself using my sword more than guns there.

There is also a training arena that I wish wasn’t included in the game. Between levels you end up back in an airplane junkyard, a boneyard, where Rubi has her hideout. When you are there you have to complete challenges which involve jumping and running along courses, trying to leap through rings and get to the end of the track before time runs out. I found these much more frustrating than fun. If you do well in the training you can unlock new weapons for Rudi, like shotguns and submachine guns, plus a crossbow with exploding bolts. It just felt a little too "Tomb Raider" to me.

For a shooter, there is actually a pretty cool plot, or I should say, the story that the game does have is presented well. Every time a new character is introduced, you get a little dramatic pose from them and their name flashes across the screen. It’s like, "Here is the infamous Rat Boy!" Even minor characters like Rudi’s fixer friend Ming get this dramatic introduction, but it’s pretty cool anyway. The plot involves Rudi going on a lot of different missions, often getting betrayed or having the mission not quite be what she expected going into it.

In terms of graphics, the game looks amazing. There are levels with fireworks and neon signs, which makes up for some of the ones that take place in rundown, abandoned places. The latter still look good, for what they are anyway. Still, I have to take a slight bit off here because there is not too much in the way of destructible objects. Stranglehold had almost everything in the city from fountains to support pillars to watermelon stands that could be exploded or riddled with holes. Wet kind of cops out in this area. In the first level you have ice sculptures, balloons and stacks of glasses to destroy. But as the game goes on, these niceties are few and far between, and mostly constrained to a couple boxes here and there. Destroying the environment would have been a lot more fun.

The sound is amazing. There are lots of pumping songs to keep you in the killing mood. My only complaint is that if you get stuck on a level, which can happen sometimes, especially in Rage mode, you may have to hear the same song repeated over and over a lot while you figure out where you are supposed to go. There are no hints like with Drake’s Uncharted if you get stuck.

Wet is not for everyone. Despite somewhat easy to master controls, the game is difficult to play, or at least to play well. Wet is not about getting from point A to B, but about doing it with style. It’s almost like learning to dance. Case in point, I would rock on a level, spraying blood in all directions and killing hundreds of bad guys. I would think that I was doing well, only to find out at the end of the level that my performance was "Average" or "Poor!" That meant fewer upgrade points and even less chance to pull off the acrobatic moves the game so wanted me to do. I am not even sure how acrobatic moves are counted. I killed almost everyone while flying through the air or sliding across the ground, only to find out that my "acrobatic kill" percentage was a paltry 20.

Someone with average controller dexterity like myself can get through Wet on normal difficulty in about six hours and have a pretty good time. But to truly enjoy this game to its fullest, you are going to have to be a true wizard with action type games. Because if nothing else, Wet is all about action and style.