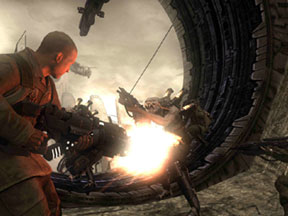 I was not lucky enough to acquire a PS3 at launch. But I did not manage to get my hands on one December 7th. And then only by walking randomly into a Best Buy at just the right time (during the delivery) was I able to grab one. For the rest of the day I had the worst luck that was so bad that I refused to go beyond opening the box until the next morning for fear that I might drop it. So at 3am (I could only wait so long), after a long patch download I started playing Genji: Days of the Blade. This is a good thing, because if I had started with Resistance: Fall of Man I would not have gotten the little sleep that I did manage to get.

Usually for launch titles, my expectations are pretty low, so I started Resistance: Fall of Man with some trepidation. But right away I became engrossed in the story and the gameplay. Several hours passed very quickly without my notice and it was not until my wife came out to remind me that it was time to go furniture shopping that I even realized it. I blame this on seamless load times between missions and levels which are just as close to perfect as any shooter before or since. The only way to know where one level ends and the next begins is to die. And that is because when you die you go back to the beginning of the level that you were on, but more on that later.

The story begins on July 11th when the US Army makes a combat landing on the Eastern Coast of England. The first wave is wiped out and you play Sergeant Nathan Hale who goes in on the second wave.

Fighting England again? I better give a little back story. In the 1930s, reports of biological experiments began leaking out of Russia. Then reports of villages being destroyed overnight reached the west, and then entire cities began to disappear. The rest of the world feared that the Russians had developed some sort of super weapon. The truth apparently was far worse.

The "Chimera" (the bad guy race you will be fighting in the game) stayed sealed inside Russia throughout the 1930s and most of the 1940s, but then in 1949 they overran all of Europe in a matter of weeks. For several months England was considered safe, but in October of 1950 the Chimera completed a tunnel underneath the English Channel. England was not unprepared, but still, within three months all was lost and the people that survived fled into scattered military bases.

When the US comes to the aid of England it is because the British have discovered some way to battle the Chimera and have agreed to meet the US troops in York. Unfortunately the convoy carrying the Brits was attacked and is not coming, but the US troops do not know about this. The rest of the story is revealed as the game progresses, and I am not revealing the surprise here.

After you are dropped in by air, the ruined city around you makes you feel as if you are truly in a war torn English city. As you move about the city, the Chimera will come running down the street, attack from cover or pop up in sniper positions on upper floors of ruined buildings.

To complete the atmosphere you will see bombs going off ahead of you killing some of your squad mates. You have no direct control over other soldiers, but if you save them by taking out a sniper or other enemy that has them pinned down, they will continue to advance and assist you; otherwise you will loose their support.

The controls for Resistance: Fall of Man are pretty standard for a Playstation, though with some notable exceptions. The big one is that if you are grabbed by an enemy you can either move the left and right analog sticks as you might in another game or you can actually shake your SIXAXIS controller (which looks really odd to someone who does not know what you are doing) to shake them off. Some weapons have targeting tags which allow the weapon to hit without actually being aimed at you. You remove these targeting tags, just as you would an enemy that has grabbed you, so be ready to shake that controller like mad.

I found the variety of weapons to be a lot of fun, and pretty much found use for all of them throughout the game. At the beginning of the game you only have one US army issue gun with a grenade launcher. As you progress you can pickup both US and Chimera grenades and other weapons, each with a special feature such as the targeting tag I mentioned above.

My favorite feature is that all of the weapons have a zoom option. My second favorite feature is that you can actually pick up and carry with you all of the weapons in the game, unlike other games, where you are limited as to the number you can carry. Switching weapons is done my tapping the R2 button and then a menu pops up on the screen and you can quickly switch to what you need. Some of the weapons are quite fun such as the time slowing sniper rifle, the organic slime (think mine) launcher which includes remote detonation, and my personal favorite: the cannon that shoots needle-like bolts that bounce off surfaces and is aptly named the hailstorm. There are over a dozen weapons in the game including some that don’t unlock until you win.

In addition to numerous weapons there are also vehicles that you can control including a huge M-12 Sabertooth tank and a LU-P Lynx which is more of an off road vehicle like a jeep. The vehicles both offer a driver and gunner position which is good for cooperative play, which I will talk about later. The tank’s main gun has a reload time which delays your shots and is controlled by the driver. The other position is the machinegun which can shoot continuously, but gets hot and has to cool after a while. The tank also has armor which will protect you, but if you run out of armor you die. The Lynx offers no such protection and when you are not playing in cooperative mode, the gunner position is run by a computer controlled ally while you drive.

Pretty early on in the game you get the idea that you really don’t have any idea what is going on. Maybe the US government knows more then they told you, maybe they don’t. But laying around are items of intelligence that you can gather to learn more about what is going on with the Chimera and other things in this alternative history of a game world. The more you locate the more you will learn.

While playing the single player game, when you are killed, you go back to the last transition area and restart that zone. Pretty much everything resets on the level, but this does not include intelligence items, which in the one time I encountered this, are still yours and are not there when you go to look for them again. Intelligence is yours to keep, probably because you would have already read them anyway.

The AI controlling the Chimera starts off kind of stupid. For the first part of the game, they ambush you really well but then just kind of stand where they are instead of perusing you. As the game progresses, you will notice them beginning to jump out and then move into cover, change position and use coordinated attacks with different types of troops to better flank you. I am starting to see games with better AI coming out, but this one is pretty good as far as they go. Oh, and just so you don’t get board fighting the same thing all the time, there is a nice variety of Chimera for you to deal with. And least we forget, the boss battles, which get pretty crazy before you finish the single player game which should last a good 10 – 15 hours.

While the graphics are not earth shaking, they fit the game perfectly. With a solid 30fps thoughout the game and seamless transitions except at the end of chapters, you won’t feel cheated on the eye candy. And this includes no slowdown even when there are loads of enemies on the screen. Early on I was walking through some grass and these bugs starting coming at me through the grass and I could only really seem them in the open spots or when they got way too close, and I was so freaked out I just started shooting everywhere not caring. I wasted a lot of ammo but was just happy that the area was now clear.

Basically think of World War II bombed out empty English cities with just a tad bit or two of creepy aliens stirred in and you have a pretty good picture of what I think the designers where going for, and as far as I am concerned they did an excellent job. It is obvious that a lot of time was spent making the different areas you are exploring look like different areas and not just the same thing again and again. Adding to the whole adventure are some really good cut scenes tied together with excellent voice acting. You literally feel compelled to finish the game so that you can find out just what is going on. Sadly the ending is not totally satisfying, but it does leave room for a Resistance: Fall of Man 2 which I think is a good thing.

The true lasting value of any FPS is online Multiplayer and this is where Resistance: Fall of Man really stands out from the crowd. Imagine playing with 30 to 40 people and there is no noticeable lag! Yes, it happens here. If that is too much for you, the map options can be scaled down from 40 to 32, 24, or 16 players and you can chose to play on the Chimera or human side. In addition to the map size and great map variety there is a large player stats system (everyone has a character sheet), a 60 level ranking system, and clan support for up to 200 members.

The different Multiplayer options include Deathmatch, Team Deathmatch, Meltdown (which is a battle to control coolant nodes, when you control enough the other side’s reactor blows and the game is over), Breach (where you try to destroy your opponent’s base), Capture the Flag, and Conversion (which is a last man standing deathmatch free for all where you start out human and when you die you become a Chimera, when you die the second time you are done). In addition to online multiplayer you can also play with a buddy using the off line cooperative-only play.

Overall Resistance: Fall of Man is a great launch game for the PS3. A good FPS is always welcome on a new system and this one has a compelling story combined with lots of fun weapons and vehicles. Toss in a great multiplayer environment and you have a hit that will be around for quite a while. I think we have the first big PS3 hit on our hands.