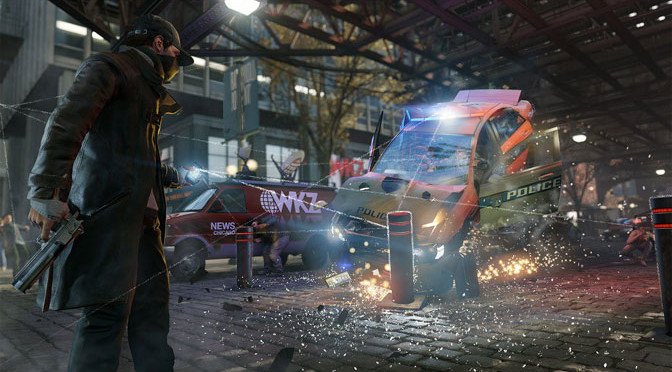 At E3 2012, that Watch Dogs trailer set the industry alight. Here was a game that looked set to capture the zeitgeist. Smart phones and tablets were becoming ubiquitous and Ubisoft’s new IP was stepping up to the plate to play with the theme of hacking and privacy in the digital communication age.

Eighteen months later and the game still wasn’t here. Then people started to mutter about the graphics being downgraded, but that turned out to be the least of Watch Dogs’ worries.  Expectations are high for the next generation and although Watch Dogs is a good game, it’s certainly not great.

Aiden Pearce is a hacker with a very near-future Chicago at his fingertips. The city is connected by the CtOS network, which allows Aiden to access everything from ATMs to traffic lights, bridges and other aspects of the urban infrastructure. He can also access the personal information of passersby, by hacking their phones, revealing details such as criminal connections, sexual preference and medical history.[amazon asin=B00BI83EVU&template=add to cart]

The most surprising thing about Watch Dogs is how dead the city feels, especially considering the amount you know about its citizens. This person dreams of being a playwright,  that woman is waiting for a liver transplant and that guy pays for sex. The level of information is impressive and should add a layer of empathy to the whole experience, but it doesn’t. Compared to Grand Theft Auto, an obvious comparison for Watch Dogs, Aiden’s Chicago is a shadow of the likes of San Andreas or Los Santos.

Aiden is a hacker working outside the law and he’s intent on revenge for the murder of his niece – a result of a job gone wrong and a decision to cross the wrong guys.  Throughout the game, Aiden uses his hacking abilities to follow a trail of digital breadcrumbs across the city.

Missions generally involve infiltrating CtOS (the big, bad digital corporation) buildings and hacking their systems for information, aided by a variety of characters.  Aiden can access security cameras and use these to travel through areas, virtually, unlocking doors and security systems. Each mission area is populated by security guards, who can be distracted by sending text messages or hacking car alarms and various props to draw their attention, allowing you to sneak past.

The open world nature of Watch Dogs is its biggest strength. The scope of the city is impressive, with access to more rural areas opened up in later missions. In addition,  you can progress through the game in your own style. It’s up to you, if you decide to slaughter guards to get where you need to be or harness Aiden’s hacker abilities to the max.

For instance, you can create explosions at fuse boxes to take out guards or blow the electrics to allow you to use stealth, rather than guns.  Out on the streets, switching the traffic lights as you pass through can create pile-ups to trap your pursuers. Bridges can be raised to aide your escape or you can hack garage doors and hide in there and disable enemy coms to turn things in your favour.  Racing through the streets causing traffic chaos is fun, but I can’t help feeling it should bring more than just a wry smile to my face.

In true Ubisoft style, the city is littered with minor distractions from the main plot.  Hacking various towers around the city ensures that portion of the map is online, opening up more missions for Aiden. There are mini games available from street dealers in ‘digital trips’ and fixers offering ad-hoc contracts, involving car chases and criminal convoys.  And there’s even a serial killer side quest to solve. However, they are never more than distractions and I found myself ignoring most of them.

The most innovative mini games allow players to invade each other’s games and try to hack them. If you allow an invitation from another player, you are given a countdown to find them, as you scan the crowd to reveal the hacker and stop them in their tracks. Surprisingly, you don’t hack them back, once they are discovered, instead you beat them to death in broad daylight. Or you can simply shoot them if you prefer not to get your hands dirty.

Funnily, there isn’t actually much hacking in Watch Dogs. It’s just a question of using the cameras to find a hub and then pressing square to open the system.  The actual hacking part is just a little puzzle game, requiring you to rotate squares to create a blue path of data to unlock the computer. For a game with hacking as its core conceit, it really hasn’t used the theme to its full potential, instead just making it a cool strapline for what can’t be denied has been an incredibly successful marketing campaign.

Watch Dogs isn’t a bad game. In many ways it’s a good game with lots of fun to be had. Despite all the gripes about graphics, it’s a great looking game. I’m sure it looks its best on next gen, but it looks pretty nice on PS3, as long as you overlook the speed boat bouncing on flat, grey water and the dodgy draw distances. The weather effects are nice and character animation works well. But despite all this and the new smartphone, hackathon gameplay, Watch Dogs just owes too much to other games. It’s a bit like GTA, but without the bombast and bad taste or sheer finesse. It also owes a bit to other Ubisoft games, such as Assassin’s Creed and Far Cry, making it difficult for it to find its own voice and character.

Speaking of character, Aiden Pearce has to be the blandest game protagonist in recent memory. He is the default white male, complete with designer stubble and gruff voice, but without the writing and acting chops that made Joel from The Last of Us and Nathan Drake from Unchartered memorable versions of the stubbly hero.

All we know about Aiden is that he is really, really angry about his niece being killed. He’s angry when he meets BadBoy17 for the first time and then he’s angry when he meets his old partner. He’s just angry all the time, but in a gruff, I can’t show my emotions kind of way. He has the emotional depth of a puddle, with no character arc. In fact almost every character we meet during the games is more interesting than Aiden, which isn’t saying much.

For all its content and gimmicks, Watch Dogs feels like a hollow world. And the lack of decent writing means I didn’t care about Aiden or his family. Watch Dogs could have been a clever commentary on the use and abuse of information in the modern world, but it isn’t. In fact, it doesn’t even seem to be aware that there is an issue to be explored. Aiden has access to all sorts of private information, but doesn’t use it to actually do anything, other than steal money from someone with cancer or a corporation – either one, it makes no difference in Watch Dogs. All data is fair game.

Even GTA has more of a moral compass than Watch Dogs. At least Rockstar feels like it’s trying to say something, even if it does use a blunt form of satire to do it, but ultimately we get  a more entertaining game, as a result.  Similarly, GTA’s cities are buzzing with life, but Aiden’s carefully recreated Chicago feels empty. Even though his smartphone tells us it’s full of life, it just isn’t, instead it feels like a set.

Watch Dogs is a competent game – the combat works, the missions are open-ended and the gameplay gives you several ways to solve them, it looks good and it’s packed with content, but it’s never more than the sum of its parts. It lacks focus and tries too hard by dishing up ‘stuff’ we’ve played in other games. Watch Dogs doesn’t do anything badly, it’s just a missed opportunity. The team should have just given us the hacking game we all wanted, when we saw that trailer at E3 2012.