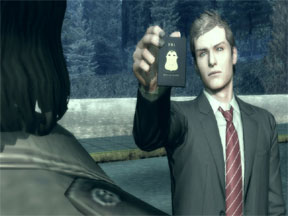 Let me just get right to the point: Deadly Premonition is a weird, weird game. Some parts of it try to play off like horror, while the rest of it does tongue-in-cheek and absurd humor. Your capacity to appreciate both of these elements in an inelegant mesh will determine how much fun you have with Deadly Premonition. The NPC characters all are bursting with personality, but again, they’re all extremely off the wall, going so far as to having a guy who speaking in nothing but rhyming couplets. The main character, Francis York Morgan, is also quite the personality- he spends his time talking about 70s and 80s film and TV references to a person named Zach, who is seemingly all in York’s head. When a game opens up with the main character talking about how Tom and Jerry have are interdependent on one another and how Tom is a masochist who needs Jerry to hurt him, you know you’re in for an interesting time.

Deadly Premonition: Director’s Cut is an upscaled reiteration of the Xbox 360 version of the game. Unfortunately, this brought problems along with it in the form of horrible, and frequent, frame rate drops. The sound will sometimes pop and crackle for no reason, let alone having already been somewhat behind the curve already in the 360 release.

The largest differences from the 360 version to the PS3 Director’s Cut version are, as you would have guessed, a few additional cutscenes here or there with the largest change being the controls for York. Players can move York as you would in most 3D action-adventure games, rather than the Resident Evil-esque tank controls. From a technical standpoint, there’s not a lot to write home about in Deadly Premonition, especially in regards to the terrible frame rate which seems to occur most when it’s raining at night (which is when you’re commonly forced into combat, but more on that later).

The best part about Deadly Premonition, hands-down, is interacting with the townspeople in the open world town of Greenvale. York, an FBI agent, visits the small town to investigate the murder of a woman and to apprehend a murderer who goes on to perform more seemingly ritualistic murders throughout the game. While there, the townspeople go about their business as normal, and if you’re wanting to question someone then you have to abide by their schedule. The in-game clock counts down the hours in the day, and around noon some of the townsfolk may traipse by the local diner for something to eat, that sort of thing.

Anyone who has played a game like Majora’s Mask would understand this concept quickly: The NPCs in this game act less superficial than those in other titles. The townspeople don’t just stand waiting in one spot for York to come up to them all day, and that little touch is one of the things that make this game feel extremely vibrant and alive (outside of the extremely fleshed out, if not sometimes weird, personalities). York actually interacts with, and interrupts, people’s lives as he goes about his investigation. The open world sidequests involve these people, and they can reward the player with everything from magic panda bears that let York buy guns anywhere to flamethrowers to use on the undead.

Of course, it’s not just interacting with people in Deadly Premonition. You also have to interact with evil spirits and the undead, called Shadows. The Shadows are the most common enemies in the game and their basic design is an attempt at horror 101: The creatures will echo moans of murderous intent as they bend over backwards, with a disturbing Joker-esque grin on their faces, and limbo shuffle toward the player character, which is quite a freaky visage. The good news: Enemies in the PS3 release of the game can be defeated in significantly fewer bullets than the 360 release, which is a welcomed change since bullet sponges are no fun for anybody.

These Shadows and other enemies only appear when York crosses into the Other World, a separate dimension that mirrors the real world but is decrepit, dark and dangerous. For some reason (not one that should be spoiled in a review, anyway), when investigating, York crosses into this alternate space and has to battle demonic spirits that take hold of corpses and attack him. In the Other World, the music becomes deceptively different; guitar twangs and low moans from Shadows attempt to startle the player, while the actual building York entered that was tainted with evil becomes twisted and maze-like, sometimes even doubling the inside area of a building in size (apparently the Other World operates by Tardis logic). Of course, the Other World doesn’t just invade reality during set event pieces in the game…if York isn’t indoors by midnight, he has to fend off Shadows or hide in shelter like dumpsters until 6AM.

One of the interesting facets of Deadly Premonition is that the gameplay is constantly changing. The daytime detective play vastly differs from how the game performs during some investigation and nighttime sections. Even more varied than that are a variety of minigames for the player to partake while doing side missions (which are the bread and butter of the game) and running away from the murderous Raincoat Killer, which is a combination of a picture-in-picture display where you can see the guy chasing you in the corner of your screen, and those quick-time-events that everyone knows and loves.

Honestly, though, taking in the realism and getting immersed in Greenvale is probably the best part of Deadly Premonition. While the combat segments aren’t all that difficult, they seem to be very little more than busy work, and there is a problem when an audible sigh leaves the lips of a player every single time York says, "They’re here, too, Zach" which means they didn’t get to York’s hotel room in time.

The soundtrack of Deadly Premonition is fantastic; for every fault lying with the sound effects, the music itself more than makes up for in its variety of folksy music, guitar tracks and more. Though, sometimes the music will absolutely not fit the ambiance of what’s happening during cutscenes at all, which is a beguiling technical decision, but when the music fits during the otherworld sections, it fits extremely well.

The music and weird personalities and humor combined with the horror-styled events is a match that actually functions quite well if the player is able to see past the technical difficulties of the game- it’s a contrast that works. This is a game where every campy, quirky NPC could lead to be the murderer in question. York needs to sleep and eat to keep himself at the top of his game (if he doesn’t eat, he will eventually die of hunger), and get his outfit dry cleaned all while managing his time around everyone else’s schedules to try and find the murderer.

To summarize: Deadly Premonition is, by all technical standards, a horrible game. The frame rate is awful, especially in areas when it rains, the graphics still aren’t up to par with most games released at the beginning of the Playstation 3’s life cycle, and a majority of the sound effects are just primitive. Fortunately, there’s a lot underneath the mess of technical bugs that pervade the game if a player is willing to look: There’s a distinct charm in all the world-crafting that went into making all of the NPCs and how they fit into the story. This game is as likely to disturb you with its limbo practicing undead or gruesome cutscenes as it is to make you burst into fits of laughter at its dialogue. The surreal plot is extremely interesting, and having a full open world environment for the player to venture about is probably one of the greatest lynchpins of the game’s charm.

Those who are open minded and interested in a horror game gaunt with hilarity (part on purpose, part incidental), Deadly Premonition can definitely fill a void and give you an experience you won’t soon forget. So says Mr. Stewart.