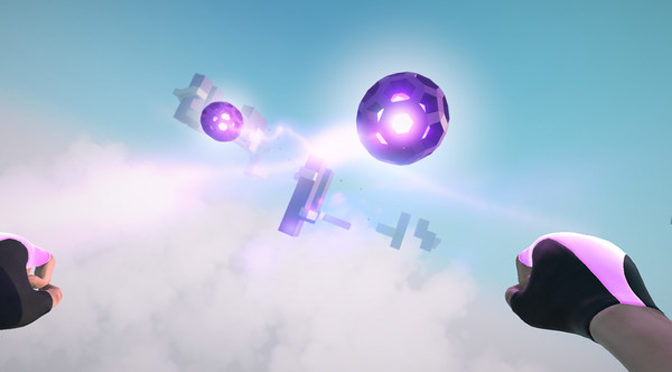 FPS platforming has slowly become more and more popular with the success of games like Mirror’s Edge, and Dying Light. Gregor Panic’s Welkin Road attempts to carve its own spot in the market focusing specifically on high flying platforming, however, as you will do many times in game, it falls short in places. It should be noted that the game is in Steam’s Earl Access and as such is subject to change at any point in its future.

As soon as one starts Welkin Road, it will be instantly familiar to those who played EA’s innovative Mirror’s Edge. However, past the visual styling there seems to be very little in common. The core gameplay is based around swinging from platform to colored node to another platform.

In the first level of the game you are introduced to the basics of movement which luckily isn’t too hard to get a hold of. You learn to run on walls, jump off of them, use your momentum and velocity as a tool, oh and how to tuck your legs which leads me into some of my problems with Welkin Road. First of all, so this isn’t a non sequitur, you can’t see your legs. Now you may be wondering “Is that actually a big issue?” and to answer your theoretical question, YES! The lack of visualization on your legs, if they exist, is that it is nearly impossible to tell if you are going walk off thin walk ways or if your legs are high enough to make a landing. This is compounded by your ability literally called “tucking your legs” which just makes you realize how much can’t see.

I can’t count the amount of times I walked off a walkway because I had zero idea where my supposed feet were. This lack of visual isn’t the only problem this game faces.

While most games that have some sort of free running involved in them allow you to catch ledges and climb them, not in this case. The only use of your possibly atrophied hands is to fire off beams of energy that work as hooks and ropes for nodes. Originally I found the fact your translucent beams don’t work on ledges as a problem, however after playing for a time, I think it is a fair way to add more challenge to the game and honestly makes you think a little more about how to approach puzzles.

However, every rose has its thorn it seems. One of the biggest issues in the game is the seemingly unstable range of your grappling beams. You will find yourself making the same jump twice only to fall short on one occasion because the game seems to have a problem reading that you’re close enough to swing and it is often the biggest cause of agitation with Welkin Road. It is positively angering to find yourself failing to finish a puzzle only to fail because the game fails to recognize range.

Now Welkin Road is not all bad it has a few features that are interesting and fun. There are multiple types of nodes in the game from basic red ones, to green ones that are capable of moving a feature on the level, or even blue nodes that you have to swing off of in a certain amount of time otherwise you will find yourself quickly falling to the embrace of failure. This mix of nodes is a nice way of adding some challenge to the game and honestly a fair bit of fun.

Another solid part of the game is its use of physics, now I don’t mean you’ll have to be digging through your high school notes to find E = MC2 to play, but you do need to be aware of how fast you are going and at what angle. These little details are nice but unfortunately they don’t save Welkin Road’s issues in gameplay and design. I would also like to note that the gameplay issues are made worse by the fact that the game grades you based on time, speed, and number of failures which becomes increasingly annoying as the game’s own failures hurt your performance.

When it comes to the creative side though, Welkin Road doesn’t do all that bad. Visually Welkin Road is almost too reminiscent of Mirror’s Edge. The use of color as a marker for certain objects is pretty much straight from it. However, bar the glaring similarity the game is pretty. You truly feel like you are in a place above the clouds soaring from platform to platform. Overall the style is complimentary to the gameplay however it does fall short in one specific area of visuals. That shortcoming is the game’s height it’s placement is above the clouds honestly removes some of the fear of missing a jump as there is no sudden hard stop at the bottom it’s just fluffy white clouds.

When it comes to sound design there is little to say, its bare bones it works. The slight EDM background music and sound of wind feel very par for the course and don’t add or take away from the overall experience. If I were to make a complaint it would be the fact that as you move from jump to jump it doesn’t feel like you are pushing through the wind, though it is really isn’t bad enough to truly be held against the game.

In conclusion Welkin Road is a case of “if it hadn’t been done before and it hadn’t been done better.” It suffers from too many mistakes that add up to taking away from the overall experience. While it may look pretty, it’s appearance is too reminiscent of Mirror’s Edge which in the end is what this game feels like. A tech demo for a game with more features and fewer issues. At least in the end the game isn’t too expensive currently sitting at $12.99 at times of review. However, with that I cannot recommend this unless you are looking for a bare bones platformer and don’t mind a few issues, since there are just so many games that do what this game does better and incorporates more.