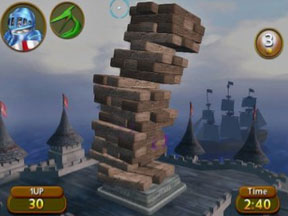 It’s hard to dish out criticism to a title that shouts "Hopeless!" even before it’s freed from the box. With Atari’s latest disaster on the Wii (lest we forget Godzilla Unleashed), they’ve decided to take the game Jenga and construct a world tour competition that no one in their right mind would want to attend.

So let’s start at the beginning and see what could have possibly led developers to think that this was a good idea.

First off, we’ll talk about locations. There are several locations in Jenga World Tour, and many of those locations have added difficulties that make stacking virtual blocks even harder than it is in real life. Ever wanted to play Jenga under water? How about in an arcade, or even an NYC high rise? How about the moon, or atop a medieval castle? I could keep going, but the truth is I can see each of you have said "no" and stopped reading by now.

The obstacles that many of these levels introduce, be it rampaging dinosaurs or firing catapults, would be somewhat involving if the controls weren’t the most difficult things to master.

You see, the physics in Jenga are a little hard to play with the Wii, though try as they might, the developers have given you a few options to try and make the task simpler. All I can say is that if you’re determined to play this game, do yourself a favor and go through the tutorial. Starting out all gun-ho is a knee-jerk reaction-it’s Jenga after all, how involved can the controls be?-but trust me, sticking with the basic grab and pull for this game will leave you frustrated by the middle of the first round.

The added controls in Jenga are simple but extremely helpful while playing the game. In addition to the grab and pull mentioned earlier, there is also a tapping feature, which allows you to test a particular piece for maneuverability, and a pinning feature, which keeps certain blocks rigid and less responsive to the block you’re pulling.

Other than these features, the camera controls are easy to master, so the major issue with playing remains with the actual picking of blocks.

Another point that’s worthy of criticism is the game’s AI. First of all, if you’re playing this game by yourself, I really do pity you, primarily because you are in desperate need of friends, and secondly, because you don’t stand a chance at beating the computer in this game. For as much as a player will struggle with any given piece, taking upwards of 30 to 40 seconds to complete a move, the computer will easily breeze through their turn in about four to six seconds!

No, the only way to play this game is in a group of real players, and if you do, you’ll be surprised at how a group will react to it. They’ll hate the game, laugh at the graphics, yell at the impossible controls, but they’ll still continue to play it.

It’s like watching a terrible B movie, or such was my experience, though I seriously doubt Jenga World Tour will gather a substantial cult following.

But even with this strange phenomenon during group play, why go through all the trouble and money of trying this game at all, especially when a real Jenga set costs half (at most) of what the Wii game will run you?

Sure, the avatars are fairly entertaining in that wacky "What the"?" style of humor, but this is hardly enough to keep a gamer from overlooking all the flaws and frustrations that this game delivers.

And even if this game is an interesting party play, maybe even a bit engaging, the bottom line is that Jenga World Tour is nothing to waste your hard-earned cash on, unless you really, really hate the physical aspect of restacking the tower.