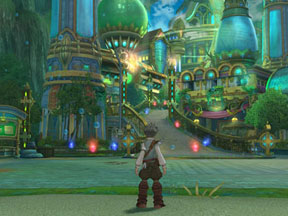 Video games are described as many things. They are called everything from entertaining by enthusiasts and a waste of time by people who are not fans. They are seen as a form of entertainment that can tell the story of a great book, but also bring the story to life like a movie. One thing that video games are rarely thought of, however, is art. And while this idea is becoming more accepted in today’s world, there are few games that live up to the title of art work. Eternal Sonata, however, is a game that is a masterpiece.

What clearly sets Eternal Sonata apart from all other video games is evident from the moment you lay eyes on the game: it is absolutely gorgeous. I can easily say that Eternal Sonata is the most beautiful game that I have ever laid eyes on. Everything from the unique design of the characters to the incredibly vibrant colors will take your breath away.

Players will first notice the intricate colors of Eternal Sonata. The attention to detail is impeccable. The characters are designed to look realistic, yet also to have a distinct art style all to themselves. That style mainly consists of the clothing the characters wear. All of the main characters have outfits that display their personalities.

Each character also has a weapon with a musical theme to it. For instance, Allegretto, one of the primary characters in the game, has a sword that looks like a violin.

The environments in Eternal Sonata are also stunning. Everything from a wide open field to the sewers below a city looks like something out of a beautiful dream world, which is precisely what this is.

Eternal Sonata takes place in a dream; the dream of famous composer FrÃ©dÃ©ric FranÃ§ois Chopin. Chopin is on his death bed and is in a state of intense dreaming. In his dream world, those who are terminally ill have the ability to use magic. Because of this, anyone who uses magic is shunned in the community.

Chopin enters the dream world not sure of where he is, or even if the world he is in is really a dream at all. He meets Polka, a terminally ill 14-year old girl who realizes she does not have much time to live. She is determined to go on a quest and help the world she lives in with the time that she has remaining. Chopin elects to go with her to find out where exactly he is. Along the way, an unlikely cast of characters join together on an epic quest.

If you can’t tell by now, Eternal Sonata contains a lot of musically themed places and characters. This is highly appropriate, however, because of the incredible audio quality of the game. Eternal Sonata is beautiful, but it is also a game in which the sound quality is on the same level as the graphics.

Everything from characters’ voices to the music of the game is crisp, clear, and incredibly well done. Scenes of tranquility are not only enhanced, but brought to life by the outstanding piano work, performed by Stanislav Bunin.

Eternal Sonata has incredible graphics, amazing sound, and one of the most original stories of any RPG. The game has delivered on almost all key levels. There is just one more important piece to the puzzle that is missing: gameplay. Fortunately, Tri-Crescendo did not come all this way just to leave out the most important element of a game. Eternal Sonata features a terrific battle system that is the perfect mix of strategy and action.

Each character on the battle field will get to take a turn depending on their speed statistic. When it becomes a characters turn, the player has a limited amount of time to perform actions with that character. These actions could range from using an item to attacking. The strategy comes into play when players must decide what actions to perform with which character.

For instance, players will not want to use their best attacking character to heal other party members, because there will be no time to attack. Likewise, a character with a low attack can best be used to heal other characters.

Overall, Eternal Sonata is an incredible experience that fans of RPGs will enjoy. And while the game is not perfect, it is easily one of the most beautiful games ever made, with an incredible attention to detail. Eternal Sonata gets 4 GiN Gems out of 5 for being an original tale with terrific visuals.