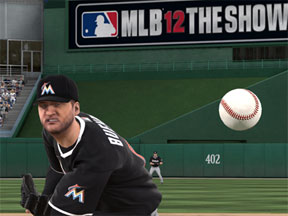 Last year was my return to Sony’s The Show franchise after a one year hiatus. While I enjoyed MLB 2K10 (and will also be reviewing MLB 2K12,) I felt more at home with The Show because of its more realistic approach to baseball. As we know, baseball is a very difficult game to recreate on a game console, but not since 3DO’s High Heat series was I able to enjoy a realistic series until playing The Show for the first time.

And this year, I’m reviewing the game for two different systems. With the PlayStation Vita’s release earlier this year, it will be the first time since The Show 06 that I played the series on a console. The reason for this is the new Cross Platform play that would allow me to take all my game modes on the go so I can keep them going. Since I love simulating full seasons, it was mandatory for me.

So after paying $80 for both games (a discount when purchased together,) I decided to give the cross platform gameplay a try, and I was very pleased with the way it worked out.

A new save option, "Upload to Cloud," is now available, allowing the save of your most recent file in each mode to the cloud to download to the opposite system. My only complaint is after you download it, you need to save manually. It would be nice to do so automatically if you forget, but on the bright side, if playing a game right after downloading from the cloud, it will save anyway.

Thankfully the Vita version of the game, in its freshman effort, did a good job in translating the PS3’s game modes (with the exception of Diamond Dynasty.) Everything, for the most part, plays just like it does on the console. I did notice a couple of nagging issues that I hope get resolved via a downloadable patch. For one, pitching now has a new option available, called Pulse Pitching. After selecting the type of pitch and where to aim it, a circle pulses in and out of the target location. Timing it when small makes the release perfect, while fully expanded means a poor release.

While timing on the PS3 version is tight, there feels like there’s a lag on the Vita version, making a button press on a small circle turn into an expanded pitch zone. It gets a bit frustrating. In addition, there are times when I want to make a substitution when my pitcher is at bat, but when I either pause the game or press up on the D-Pad to call up the sub menu, it will not respond, and the first pitch is on its way. I don’t have this problem with the PS3 version and I hope it gets resolved real soon. But even with these issues, the Vita’s first effort plays quite well, a must for cross platform play.

The scores in the chart above are for the PS3 version of the game, since the Vita is more or less an add-on to that. However, if I was going to score the Vita version separately, they would be as follows:

So the Vita version scores well too, and hopefully will be better with a simple patch.

One issue I’ve always had with the PS3 version of The Show is the strict batting mechanics. Just like with EA’S MVP series, batting is very difficult, as you have to wait for the right pitch to come, and you at times have to work the count to get the right pitch to come, even if it means having to take a few strikes along the way. Therein lies the problem. The Show’s AI pitchers almost ALWAYS throw strikes, and getting walks is very difficult at the default settings. I had to do some heavy adjustments with the sliders in order to get a few walks in. But once I finally got the right set of sliders in place, the game played great, and even better, they transferred over to the Vita via the cloud.

The presentation for MLB 12: The Show might look like it’s showing its age, especially in comparison to MLB 2K12, but it is still high quality. The three man team of Matt Vasgersian, Dave Campbell, and Eric Karros are still high quality and provide very accurate commentary as the game progresses, even going as far as criticizing umpires when they make bad calls, and complaining about no restaurants being open if games go into extra innings. Too funny.

Even the ballpark atmosphere is accurate, and feels authentic to their real life counterparts. Hearing the PNC Park announcer mention Pop’s Plaza or the Gateway Clipper fleet hit pretty close to home is great. Most of these elements on the PS3 also translate over to the Vita quite well, although it does feel a bit truncated. Elements such as home run celebrations and pre-game activities have been eliminated for the Vita. Hopefully The Show 13 will include those. Graphically, the game is gorgeous and runs great, at least on PS3. That’s not saying the Vita version is terrible. It just suffers from frame rate issues between scene transitions. Thankfully it doesn’t interrupt game play too much…aside from that Pulse Pitching issue.

MLB 12: The Show is again a winner. For those who want the most realistic baseball experience on a console, this is your best choice. The addition of taking your franchise or Road to the Show player on the go is a much welcome plus!

Pros: Carries on the tradition of being the most realistic baseball experience available on a console. Gorgeous visuals on PS3 version. New Pulse Pitching system works out quite well on PS3. Cross platform play makes taking your saved games on the go a breeze!

Cons: Batting takes a serious learning curve, unless adjusting the AI sliders. Adjustment mandatory to get more walks in a game. Vita version of the game, while still excellent, is a bit like "The Show Lite." Vita Pulse Pitching not as accurate as on the PS3. Frame rate issues on Vita.