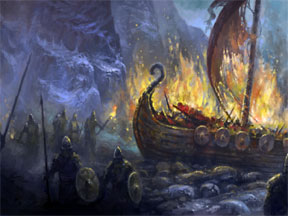 I absolutely love medieval history. I have dug myself into a great many books learning about the old kingdoms. So when I was given the opportunity to take control of these kingdoms I was happy. Paradox Interactive always does a great job with historical simulations that push the boundaries, and Crusader Kings and Crusader Kings II are among their best. Though they are not the easiest games to play, once you master them you can’t help but come away with a better understanding of history at the same time.

Those who follow The Crusader Kings line of games are quite vocal in their love of it, and with good reason. Mastering the game is quite an accomplishment. And Paradox has been good to its fans, releasing lots of DLC content which adds new armies, technology and peoples into the mix. But I don’t think I’ve ever seen the community as excited as they were for the release of The Old Gods. I suppose Pagans hold a special place in the hearts of the barbarian-minded among us.

In general, all of the DLCs tweak the core gameplay a little bit, and Old Gods is no exception. The biggest change is that the starting date for games can be set to 867, which gives a vastly different look to Europe than the normal start time of 1066. I think this was done somewhat to give a greater shift in power to the Pagans, since their nations thrive on conflict and are generally weaker when at peace. Back in 867, Europe was made up of lots of tiny little countries, baronies and territories, which plays more into Pagan hands.

Unlike most people, the Pagans are not a unified bunch. You actually get access to several armies and people and have to pick one to play, from chaotic Nordic Vikings to more structured Zoroastrians. Playing as a Pagan is a lot of fun, and gives you access to special perks, like the Viking ability to navigate up rivers to perform sneak attacks. But even if you don’t actually play as a Pagan, just having them in the game adds a lot of extra flavor. The wise ruler always keeps an eye on them, as many of their tribes terrorized Europe for hundreds of years with their constant raiding.

Another gameplay tweak is that you have more control over what technologies are developed in your realm. This is done by speeding up research into areas you really need or want by spending tech points. This does not radically change things, but does give even more control over a game that has quite a lot to start.

To challenge the Old Gods, I took control of a small county under Serbian rule. If this is your first time with Crusader Kings, don’t be surprised by the level of detail. If you go into the game thinking that it’s Rome: Total War and you are going to sweep out and dominate the planet, you will be disappointed. The reason for all those little nation-states and baronies and whatnot is that it’s really, really difficult to take over a neighbor. Even if you have the army and the resources to do it, there is always the question of allies, others who will attack you just because you are expending your forces elsewhere, or friends of the people you are beating up.

Crusader Kings II is very political. If you aren’t on everybody’s good side, it can easily come back to bite you. On the flip side, it can be a saving grace if done right. If you marry smartly, share your wealth, and help out others, they will do the same for you, sometimes. There was an instance in one of my games where a small Croatian kingdom lied and claimed they had a right to take my country. Once a formal declaration of war was given, I had four different countries say, "do it and we will wipe you off the face of the Earth." The attacking country smartly withdrew before any bloodshed could occur. At that point I could either start working against them and building up a military coalition of my own, or try to use diplomacy to tie our kingdoms together through marriage or mutual interest. How you proceed is up to you. As in life, there is never a definitive right or wrong answer. It’s about how you play the game once a course of action has been made.

Of course being a lover of a history, I really judged this DLC on accuracy. All of the barbarians were correct down to the minute detail. Just like in history, most of them never bother to make a formal declaration of war. Things will be going along fine in your sleepy hamlet and then, bam, a surprise invasion of Vikings makes life very interesting.

Playing one of the Pagan nations is a lot of fun, and is more fast-paced than with the more structured realms. The fact that the game is set 200 years before Europe started to coalesce somewhat into the borders and places we know today gives the new peoples an advantage. Their chaotic nature is perfect when there are a hundred tiny nations scratching out a living on one map, but not so much once they begin to become organized superpowers.

Of course you can always reform the Pagans, which is done by controlling three religious sites and having a high moral authority. Doing so turns most of them into a more modern, organized nation, though you may lose some of your perks along the way. My advice is to raid, plunder and pillage, so long as you know that most likely your glory is fading. Still, it adds some more excitement to the game. Playing against the Pagans is fun too, as they don’t often play by the same rules. Dominating, or even surviving, on a map filled with Pagans is no easy task, but makes for a great challenge.

As with the rest of the series, the graphics are great. There are no combat modes, so you focus on just the country map. The areas are well drawn up and looked very pretty. Terrain was accurately added to each part of the world, only increasing the realism, which is important for some of the new terrain-dependent powers.

The music was great, and very soothing. It fits really well with the slower, more drawn out tempo of the game. Crusader Kings II is not a title where you can turn your brain off and play. It’s a challenge and a struggle to live through it, and that’s what makes it so fun. But the music goes a long way to removing some of that tension, and it’s always nice to have it playing while you strategize.

If you love games the push the limits of your thinking, and in some cases your sanity, then Crusader Kings II is a perfect fit. The Old Gods DLC picks up the pace a little bit, and adds a burly, chaotic people into an already volatile mix, so a very good thing all around. Like the core game, The Old Gods DLC is very difficult to master, but there is a lot of fun in trying. It earns 4.5 GiN Gems.