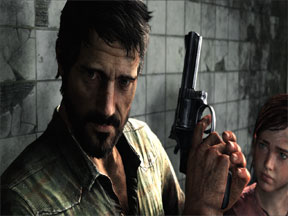 What sets The Last of Us apart from the well-trodden road of zombie survival horror games are the characters, the story and the pacing. You’d be forgiven for yawning at the prospect of another game focused on a pandemic, resulting in a post-apocalyptic setting, populated by either mutant hordes or pockets of cabin fever crazy survivors, who shoot first and don’t ask questions, but just rifle through the pockets of your corpse. Whilst The Last of Us is that game in a nutshell, it’s also so much more.

The game starts at the outbreak of a fungal infection, which spreads quickly and devastates the human population. After an emotional opening, the narrative picks up again 20 years later. The government has collapsed, cities have decayed and society is barely surviving under a brutal military rule, which uses curfews and quarantine zones to control what’s left of the population. Beyond the quarantine areas, it’s anarchy, and violent gangs roam the streets killing anyone who may have resources they need.

The infected are humans who have been consumed, but not killed by the fungal infection. They have become violent, raging monsters whose heads eventually become hideously deformed by the fungus. They are fast, lethal, and they are everywhere, so you need your wits about you to survive.

Joel is a world-weary survivor, who finds himself escorting Ellie, a 14-year old girl, across America to find a rebel group. He’s a reluctant chaperone. But Ellie proves to be more of a partner than a mere encumbrance. She can be boosted up over fences to open gates and reach ladders. She can also handle herself in a fight. Although, she’s no kick-ass kid with an implausible grasp of martial arts. Ellie’s just a resilient kid and that’s how she fights. She’ll pick up a bottle and smash a foe over the head or leap on their back and stick them with her knife to help Joel out. This is just one example of the balance and less-is-more approach Naughty Dog has applied to The Last of Us.

Joel and Ellie could be the best-drawn characters to grace a game. He is grizzled and taciturn, but still likeable because his backstory is established early on. In contrast, Ellie, who was born after the outbreak, is tough without being angst-ridden. She’s funny and seems to shrug off a lot of life’s hardships. She’s curious about the world "before," but Joel is less than forthcoming, although he finds himself warming to Ellie as the game progresses. Of course, this character relationship is an oft-used road movie trope, but the writing makes it seem fresh and engaging enough to pull you in.

There are clear character arcs, which is really rare for a game. Joel won’t be the same person he was at the beginning of the game and the same goes for Ellie. They’re relationship grows without becoming sentimental. This is a world that has no room for sentimentality. We’re reminded more than once, that’s the sort of thing that will get you killed.

In The Last of Us, there are a lot of ways to get killed. There’s the military force, which uses search lights, and communicates well to fan out across an area. They also have the benefit of armor and helmets, which makes them harder to kill, if you run out of bullets.

The rogue humans are a nasty bunch, but not as organized as the military. They will use Molotov cocktails and think nothing of peppering a house with whatever gunfire they have at hand. But it’s the infected that are the real foes. In open spaces it’s not so bad. Unfortunately, Joel and Ellie have to traverse sewers, dilapidated buildings and subway stations to make their way across the cities.

Joel is handy with a gun and a bit of pipe, but he’s no superhero. The combat is challenging and if at all possible, something to avoid, bringing a stealth element to the game. Ammo is limited, so Joel has to use whatever comes to hand. There are several items to collect throughout the game, but none of them feel surplus to requirements.

You would be wise to investigate every room, cupboard and corner to scavenge for broken scissors, alcohol, rags, sugar, bullets and health packs. All these can be combined in various ways to make medi-kits, smoke bombs, Molotov cocktails, nail bombs and shivs. This arsenal of weapons gives you several different strategies to use against different foes.

A gameplay video from E3 shows a long section of gameplay with human enemies.

As for the infected, they come in two guises. Runners can see and will hurtle towards you at speed. They can be shaken off once they get a grip on you, but then you have to dispense of them quickly, otherwise you will go down. Runners usually hang out in large numbers, so it’s best to use stealth to take them down one-by-one. Joel can use his acute hearing, which gives a rough guide to where foes are. Some might find this too much hand-holding, but I found it invaluable to combat the quality AI.

In contrast, ‘Clickers’ are blind, as the fungus has spread from their eyes and engulfed their head. They use sound to locate you, which adds a creepy rattling noise when they are near. They can’t be defeated using unarmed attacks, so make sure you have a shiv to stab them or use a gun. Once a clicker grabs you, you’re a goner. If possible, sneak up on them and stab them quickly.

The combat is tense and brutal. Joel will grab a foe and smash their head against a table, which makes me wince every time. It teeters on the edge of taste for me, but given the survival situation, I can live with it and he doesn’t use that move every time. You can also strangle foes for a stealth kill, but you have to watch as they scrabble for their life, before finally going down. One look in Ellie’s eyes adds some element of gravitas to every kill, so Naughty Dog does a good job of trying to remind us of the cost of the violence. This is echoed in the moment when Joel gives Ellie a gun. It’s not a "yay, let’s kick some ass" scene. Instead Joel hesitates and tells her to take care.

It’s quiet moments like these that are at the heart of The Last of Us. The pacing is superb. This is a game that isn’t afraid to slow down and take stock of the characters. Each cut scene allows them to grow and deepens their story. Ellie and Joel meet other friendly survivors along the way and as they investigate areas, the natural dialogue between them makes what could be a mundane search and click for ammo moment feel more real. These characters feel like they had lives before the game started and we just hope we can ensure they have lives after the end credits roll.

The Last of Us looks gorgeous. Lovely details, such as abandoned ice-cream vans and the posters on walls of abandoned houses, even a lawnmower, perhaps once mid-mow, all remind you of the neighborhoods that have been destroyed. The environments are often large and lovingly crafted, with secret routes and entrances to find. Weather effects change the mood, from a derelict cityscape bathed in an apricot sunset, to the black, driving rain of a stormy night, or the dappled sunlight sparkling on a forest river.

Naughty Dog have also used sound to great effect. The score is spare and measured, coming in at just the right moments. But most of the time, there’s no music at all. We are treated to the sounds of the post-apocalypse and it’s much quieter than our world. You may hear birdsong, the rush of a river or the ominous creak of a skyscraper about to collapse. When the infected are near, the audio takes a turn for the creepy, whether it’s the clickers’ chatter or the thud of a demented runner, hurling itself at a door.

I have to really dig to find anything wrong with The Last of Us. Sometimes, foes overlook Ellie, even if she’s right at their feet, as long as Joel is in cover. And although Ellie’s AI is superb, sometimes she doesn’t turn around and go back down a narrow corridor if you do, so you have to shuffle into her to get her to shamble backwards. That can be a little tiresome, but it’s hardly a game breaker. And if that’s all we’ve got to grumble about, we’re doing well in a game of this scope.

The Last of Us is a star turn from Naughty Dog. The missions never feel repetitive and the puzzles are seamlessly integrated into the story, rather than just being rammed in there to make it feel like a game. This is a perfect marriage of narrative and gameplay. It’s one of those games you can’t stop playing, but also never want to end because you end up caring, and that’s not something you can say very often.