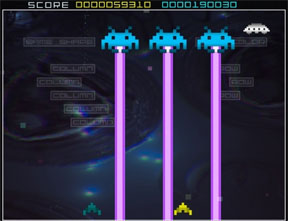 Coming out in honor of its 30th anniversary, Taito released an update to their classic Space Invaders. Sure we have seen many revisions to the classic SI formula, but they all played the same. Even the home versions released by Activision in 1999 as part of a wave of classic remakes failed to impress, especially when you consider it was at a retail price.

Thankfully the rise of download services such as Xbox Live Arcade allows us to relive some of the classics are they originally were, as well as updated remakes. We’ve already seen it done right (Pac-Man Championship Edition) and wrong (Frogger 2.) But now the latest of the arcade remakes is actually a game that was previously done on handheld consoles.

Space Invaders Extreme was originally released on the Nintendo DS and the Sony PSP. I had a chance to play the DS version, and aside from Contra 4, it was the only game I played on a regular basis for that system. It was simple, catchy, addictive, yet stayed true to the original formula. The Xbox Live Arcade version is actually based off of the PSP version both in terms of graphics and music.

However the basic gameplay stays the same, shooting the invaders. However where SIE differs from the other games is they do not come in the same 55 invader formations. Also despite looking exactly the same as they did back in 1978, they also assume different colors. These color schemes are vital to succeed.

By shooting four of the same colored invaders in a row (excluding white,) a power up can be obtained which includes a laser, bomb shot (explodes on impact,) broad shot (row of 5 shots,) or a shield. However should a second different colored group be destroyed in succession, a bonus UFO will fly at the top of the screen. Shooting this UFO will start a bonus round, and completing it in time will start Fever Time.

In Fever Time, weapons are powered up and UFOs are worth jackpots. Even better, should Fever Time be started when in Break Mode (which occurs when the score rate is x5) there will also be the chance that a Super Jackpot UFO can be shot down for bigger points.

Gameplay goes through five progressive stages, each with its own boss (usually a larger version of the main invaders.) After Stage 2, based on the previous stage rankings, players can choose an easier or harder level to proceed. Thus there is the possibility of 11 stages that can be played in Arcade mode and also in Stage Select mode after the chosen stage is beaten in Arcade.

Both the handheld versions had their perks. The DS version had better networking and sound while the PSP version had the better visuals. For the XBLA release the core visuals, as well as the soundtrack, are based on the PSP release.

However a new background visualizer was created by Jeff Minter of Llamasoft (maker of the heavily underrated and unappreciated Space Giraffe.)

Despite the game originally designed for handhelds, the translation to XBLA is superb. Adding the visualizer plus running the game at 60 frames per second is a definite plus. Same can be said for the sound. While I favored the DS soundtrack, the PSP based tracks are equally good, and actually plays in tune with the actual game. Even the simple sound of your laser cannon has a nice beat to it.

Basing its network play off of the DS version, the XBLA’s SIE is the first to include both 4 player co-op and competitive play. It is a unique and novel concept but unlike other XBLA games played on Live, I noticed a slight lag in controls. It’s not too distracting but when you need precision it could result in some issues.

The best part of SIE is the price. While the handheld versions can be picked up for $20, on XBLA it is only 800 Microsoft Points ($10,) and it is definitely a great deal as Space Invaders Extreme is an excellent remake to a true classic, perhaps the game that inspired the whole shooter genre.

Now if only Taito can also release SIE 2 to the US, especially an XBLA update!