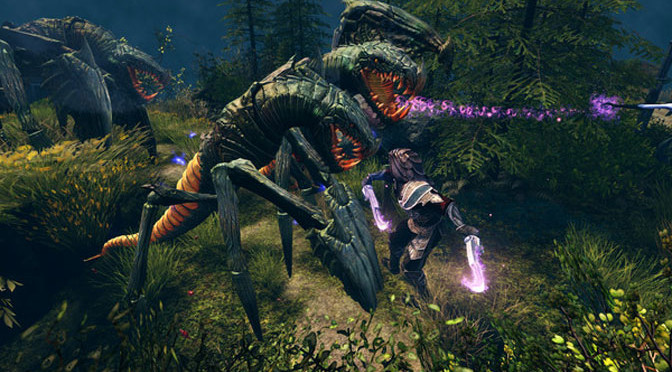 ARPGs are a very fickle type of game, consumed by a very fickle type of consumer. A decent product is praised, a great product is recommended beyond measure. Those that do not meet expectations are complained about for years to come- for proof of this, see many, “Too little, too late” comments all directed at Diablo III. The Adventures of Van Helsing III is now the third in what has culminated in an annual series. Is this third installment worth the cash or would it be better left to a Steam sale, if at all? Read on to find out.

The first Adventures of Van Helsing game, which I reviewed in 2013, was quite the enjoyable hack n’ slash style RPG. Players would come for the familiar gameplay and… probably the pancakes, or something, but would stay for the clever and humorous writing or the atmosphere. Van Helsing III follows much the same path as the first game of its series, treading extremely familiar ground should you have any experience with this genre. There are monsters to murder, loot to collect and your character to develop with odd and interesting skills. Oftentimes, executing the common elements of the genre is more important than innovation and in that circumstance Adventures of Van Helsing III makes a familiar, but still entertaining, experience.

Those returning from the first or second Adventures of Van Helsing game may notice the six different classes available, each with their own advantages and disadvantages. The Constructor fights with gadgets and turrets, for example, while an Umbralist will take a rogue’s approach to combat, disappearing and dealing heavy damage in single strikes in exchange for severely lessened defenses. Some skills are significantly less useful than others, though, since playing an Umbralist can feel underpowered. However, upon unlocking Wraith Strike and talents that apply shadow marks you can begin one-shotting bosses. Balance is an interesting subject in this game and it can really be as easy or as difficult as you wish.

Check out the first 30 minutes of gameplay in our Van Helsing III Let’s Play:

Due to the nature of the classes, some may find there’s some decent replay value to the game. This is important, considering the current level cap is actually quite low. The constant flow of new gear, increasing stats, etc., makes progression a pleasant experience the whole way through the adventure, with select equipment being for your character while others are used for Katarina, your follower. With how plentiful new items and equipment are, it isn’t uncommon to stop every so often just to check if that new chest piece you picked up is marginally better than your current gear. One thing that could have used some work was the user interface, which definitely could have used a less over-designed touch.

The game’s steampunk-inspired aesthetic is also present in the UI, but it doesn’t translate well due to empty space in areas like the skills menu, for example. The aforementioned  menu is covered with a series of circular portraits, segments that light up, etc., but none of it means anything until the player haphazardly clicks or hovers over various facets of the skills menu to determine how to add points to skills or what they’re even adding points to is somewhat unintuitive when you’re starting out. The skill menus, etc., aren’t exactly more obfuscated than US foreign policy or anything, but just like it there is a lot left to be desired.

As stated before, one thing players could count in a prior Adventures of Van Helsing game was the humorous dialogue. Singing terribly off key to torture information out of a prisoner is not an unheard of thing in this game and most of the voice acting is of high quality, so it takes advantage of the script and ridiculous circumstances quite well. Some characters voice acting seems nigh of intentionally bad, however, which only adds to the humor. The campaign has a fair amount of content, and while the story isn’t exactly anything to write home about (which, most don’t buy ARPGs like this for the plot), the referential humor should have enough to keep a player’s attention through much of it as it isn’t your typical grim-dark fantasy affair.

As far as graphics go, the Van Helsing games have never exactly been aesthetic powerhouses. The environments typically look quite well from the standard viewing distance, but there are various imperfections that only become more obvious if players choose to zoom the camera in, for some reason. The areas you traverse are, however, quite varied from one another and you won’t mistake yourself one zone for being another, something the dungeon simulator type of Diablo clones tend to get wrong. There’s not really a significant, noticeable difference from Helsing I to III, which may make sense since the games are merely a couple years from one another. Those expecting some kind of tremendous technological advancement will be disappointed, since Van Helsing III uses the same engine as prior games and looks quite familiar.

Of course, there are a fair amount of issues with the game as of release, the largest of which being that there are bugs aplenty, many of which affect users differently. Falling through the floor, pathing bugs (your character or the companion just can’t figure out where to go or how to get there), video glitches, being unable to attack for extended and random periods of time- all of these were experienced in just a few hours of play. Some of the bugs are inconsequential, while others are frustrating enough to cause a player to shout at the inanimate object that is their monitor, many of which don’t recognize voice commands nor could it do what the player orders it to since it lacks the proper, um, parts.

There were more bugs than if you were to cut through a mattress at a local motel, and while some of these were patched a fair number of them still remain. At release, there was text on Katarina, the ghost follower, that she could go to town and purchase potions. Normally this wouldn’t be a problem… if the text wasn’t carried over from a previous game since you can’t buy potions in Van Helsing III. That, of course, was patched out in the first update or so while other glitches such as being stuck in place for extended periods of time with no enemies around seem to still be present. Thankfully, online connectivity returns in the third installment of Van Helsing. Players in the campaign can have someone join them, but there’s even more replay value in the multiplayer co-op scenarios that players can team up to beat. There are also two PVP modes on which your mileage may vary- some may get lost in those for hours while others may find it too removed from normal game progression and abstain. Those wishing to play more single player after finishing the campaign can also take on additional scenario challenges that allow players to fight against enemies higher than the level cap.

All in all, The Adventures of Van Helsing III is a decent game. There’s nothing truly remarkable about it, least of all should you have gone through prior iterations. Those who invested significant amounts of time in the first two games may wish to pick up the third simply to finish the story, while those less invested may move on to other Diablo-likes with fewer issues. One thing is certain, however: If you did not like one of the first games in the series, you will not like the third and there is nothing in III that will change your opinion of the series. Van Helsing III is a very, very modest sequel sold at a modest price point, offering extensive play time should that be the kind of game you enjoy. Those who like ARPGs will assuredly find something enjoyable in the third installment of the Adventures of Van Helsing franchise, while those wishing for a more expansive sequel might want to wait until more patches release.