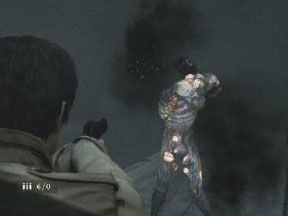 When Silent Hill: The Room came out in 2004, people mumbled, grumbled, and criticized. This "addition" to the series hadn’t even started its life as a SH title. They modified it at the last second to blah, blah, blah" And yet, I’m here to tell you, as far as SH games go, after being worked over by Team Silent, Room blew Homecoming into the stratosphere, vaporized it with its heat vision, and then ground its ashes into the dirt with its ratty sneakers.

Needless to say, I was not impressed by this newest SH chapter.

Here I had waited four years for a next-gen console release of my favoritest of favorite titles, and this tragedy is what Konami delivers. For shame.

Had they developed and released Origins as a PS3 title and come out with Homecoming as a PSP game, then I would have been singing a different tune, but no. The die were cast and they landed poorly. Now all the series-long fans must suffer.

But enough with general rantings of disapproval. Let’s move to specifics.

There are several annoying aspects of this game, but the faulty controls that get you killed more than they conceivably should rank up there as the absolute worst. The most noticeable failure is the dodge feature that developers have worked into Homecoming.

Though the main character, Alex Sheppard, performs a mean summersault, he never seems to land them where you need him to, which often proves problematic to living, or survival in general. This is true with Needlers in particular.

In most cases, your only hope at defeating a Neelder is to dodge your way behind them, but with the main character performing rolls that either run head-on into the foes or that slam you up against nearby walls, these bladed enemies upped my stress levels to no end.

Also, I want to say that the puzzles and tasks were too easy and tedious to bear at times, but I fear this claim will make me read like an amazingly condescending gamer. Still, with this in mind, I can’t let the fact that a drunken puppy could complete these challenges go unnoticed. So it’s out there. Do what you will.

Now, you may be saying: "Why, James, you’ve not even mentioned the overall story of the game. What gives?"

Well, funny you should ask, because the story aspect of this game is probably the paramount flaw to this whole debacle. Sigh and weep followers of the old storyline, because Roger Avery, Christophe Gans, and the entire TriStar Pictures team has very nearly screwed us out of our franchise. Looking back, I should have seen it coming-even despite the ray of light that Origins turned out to be.

Homecoming follows the adventures of the previously mentioned Alex Sheppard-a battle-injured soldier home from the great war-as he makes his way through Sile—, uh, Sheppard’s Glen.

Yes, Alex’s hometown, situated just opposite Toluca Lake from Silent Hill, is the focal setting for this extension of the SH series, and with it we see that the story writers for Homecoming have opted to tie in more of the Order that have been disseminating the odd religion of SH.

The only problem is that up until the film we only saw sparse, single character representations of the Order, which kept the dubious sect shrouded in secrecy and allowed game writers shifting room insofar as scripting was concerned. But those days, I fear, are far behind us now.

With the coming of the Silent Hill film and those ridiculous cries of "Witch!" that the filmmakers just had to toss in there (Wrong! Wrong! Wrong!), the series suddenly had a whole new base of fans that the game industry had to concentrate on.

I’ve always heard how a movie based on a video game is probably doomed from the start, but this can often be a double edged sword. Because the film that Gans and his crew produced wasn’t completely terrible from a financial stance, now, suddenly, this facet of the SH enterprise has risen to shadow much that Team Silent had been building up since 1999.

Luckily, Homecoming didn’t push the film’s ideas into the game beyond this Order business and the overall look that the movie designers had settled on for the film. Still, even this may leave some gamers to feel cheated or led by suspicious hands.

Now, instead of "Wow, a virtual cornucopia of awesome references from the previous games!" moments, we are force fed "Remember this, you idiots? You saw this kind of design and representation in the motion picture!!! That means it’s fantastic! FAN-TAS-TIC!" and somewhere a small box hanging from the ceiling lights up and reads "Applause."

Sorry. Not buying it.

While calls to Robbie, Travis Grady, and a brief, passing reference to Douglas Cartland existed, the overall attempt was too sparse, too bird’s-eye-view to be genuine-though I do have to give a heartfelt, if not a bit clichÃƒÂ©-riddled, chuckle at the inclusion of the Konami Code at the game’s title screen.

Still, that rush of excitement that all the other games produced felt absent, causing me to see Homecoming as the neglected child of the series, not really fitting in with its other siblings. (How appropriate that one of the game’s themes should focus on sibling rivalry.)

Double Helix can take their finely polished pile of good intentions and embark on a solemn death march into the abyss, for all I’m concerned. Because for the most part, Homecoming has all the right devices, all the right accents, but they are used in such a formulaic way that gamers find themselves wondering what exactly the payoff will be for putting so much time and effort into this game.

And just a heads up: The payoffs aren’t good enough. Not even a little.

Envelopes that needed pushed were left at status quo. Ideas that needed to be embellished were merely nodded to. Not to mention that the game keeps you out of Silent Hill proper for most of the gameplay.

(Note: This last criticism I’m compelled to explain in greater detail. The idea of the effected town neighboring Silent Hill could have been a worthy thing to analyze, but for the most part, the direction was inefficient and could have stood to be cooked a little longer, and for this reason, I feel that there was a fumble on their field of play.)

Team Silent (or Climax Group, for that matter), why have you forsaken us?

Sadly, maddeningly (especially since I’d always considered SH a more literary style of horror game), Homecoming feels like a cheap cash-in on not only the franchise, but, more imposingly, on the film. This is evidenced by the pre-orders of the game coming not with the hoped-for Akira Yamaoka soundtrack sample but instead with-you guessed it-a free copy of the full-screen version of the film (because everyone wants full-screen).

Now, after having released a kettle’s worth of angered steam, I will say that I’ve played the game several times through and unlocked all unlockables, and still my opinion hasn’t changed. This game will fade away when stacked up to the staying power of its predecessors, but I’ll have to acknowledge that Homecoming had my hopes up to near astronomical levels, which may have skewed my perception.

But forget that. Silent Hill is not just another horror series; it ranks even with Resident Evil, above Siren and Fatal Frame, and until now, for me, it was unrivaled as the greatest franchise in the business.

The phrase "unmet potential" comes readily to mind, but even that does little to fully explain my disappointment. Hopefully, 2012 will show two great surprises: the complete inaccuracy of the Mayan calendar and a SH installment that’s worth its name and our time.