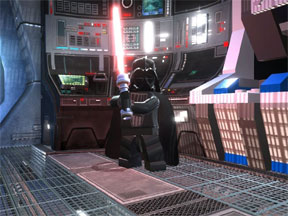 Anakin is good and the Stormtroopers are called Clone Troopers, and they’re good too. Actually, remembering not to kill the Clone Troopers takes a minute in this game, but they are so much cooler than any previous trooper in the Lego games that I warmed to them quickly.

The standard Lego approach of having two modes for every level is consistent for Lego Star Wars III. There is story mode and free play mode. Within each level there are ten canisters to collect, most of which have to be acquired in free play and True Jedi, which is based on collecting a certain number of Lego coins which pop up whenever you destroy something. The number you need to make True Jedi varies depending on the level. There are also gold bricks and other goodies to collect along the way. Just as in other Lego games, levels are accessed through a central hub, but the central hub in Lego Star Wars III takes the hub concept up a notch. The hub is a ship, which you can explore to find some of the objects you’ve built with collected gold bricks, but most importantly, you can leave that ship and fly to other ships to view other collections. Not since Lego Batman has a hub been so interesting.

One flaw I have with the hub is in the locator for various levels. The characters step on a pressure plate to bring up a console, which has six screens, the first of which is the screen for levels, but the map on it is quite squirrelly and unnecessarily complicated. That’s my last complaint about this game.

As for the troopers, gone are the days when troopers could only shoot, grapple, and jump awkwardly. In this game the troopers pack a lot more punch.

First you have the Bazooka Trooper who has serious destructive capabilities. Next you have the Machine Gun trooper. This guy is critical for taking down gold objects. But perhaps best of all is the Trooper Commander. This trooper rallies the troops so you can use all their firepower in a block. These guys are particularly effective at taking down large weapons or droid armies. All the troopers can still grapple, and they can all throw electrical bombs to short circuit certain computer systems.

As if the improvements on the troopers weren’t enough, the Jedi have been improved as well. It used to be that the Jedi in the Lego games weren’t that powerful. Sure they could use the Force, but in general combat they weren’t necessarily any better than any other character. Not so in Lego Star Wars III. In this game the Jedi rule and they are very powerful.

The Force is easier and faster to use. The lightsabers are more powerful too. You can target and throw them now to great effect. When you do the high double jump and slam them into the ground, not only are enemies scattered far and wide, but a burn hole appears in the floor. Last but not least, there are doors that the lightsabers can cut through. The little Lego Jedi cutting through doors is one of the cuter things I’ve seen in a Lego game and these games are full of cuteness. Cute characters and humor abound in Lego Star Wars III as they have in previous Lego games. The handling of General Grievous alone is worth several laughs.

Even the flying has been improved in this game. Flying in previous Lego games was always a sticking point and those missions were always the most difficult. The puzzles in the flying levels weren’t that challenging compared to controlling the spacecraft. Gone are the clunky flight mechanics. Flight in Lego Star Wars III is smooth and responsive, which is particularly important, because since the flying is easier, the puzzles are more challenging.

The flying levels aren’t the only ones that are more difficult. Thanks to split screening, groups of characters are often divided into teams. Each team can complete part of the puzzle but switching back and forth is required to complete the level. Not everyone likes the split screen levels, but I found them an interesting challenge.

I confess I was skeptical that Lego could return again to the well of Star Wars and bring up anything new for the player to experience. I was so wrong. Lego Star Wars III is a fabulous addition to the Lego universe of games. There are all the things we loved about previous Lego games, corrections of the problems that were annoying, and new features that make the game so much more fun to play. There is very little not to like about this game.

Lego fans go forth and purchase.