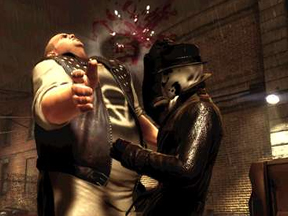 Watchmen: The End Is Nigh

The Watchmen game released on Xbox Live a few days prior to the film debut in the U.S. at $20.00 (1600 MP). It broke just one record that week: the largest Xbox Live arcade game even in terms of size, taking up over 1 GB on my hard drive.

After playing the game, I can say that it’s not worth it! I could tell why the file size was so large when I viewed the in-game graphics. The amount of detail was amazing for an arcade release, even though the cut scenes were styled true to its graphic novel origin.

Let me take the time now to say that I am not a Watchmen fan, but I did not let that interfere with my review. I go into every game with an open mind and truly hope to enjoy it.

You have the choice to play as Rorschach or Night Owl, but none of the other Watchmen. I would suggest if you play this game, to play with a friend in split screen co-op mode. I tried playing it by myself but became very frustrated when my lazy AI partner stood around like a bump on a log and watched me fight everyone!

The story starts in 1972, prior to the passing of the Keene Act which outlaws all non-government vigilantly "superhero" types. Sing Sing prison has broken into a full scale riot and Rorschach and Night Owl are off to save the day, without the warden’s blessing. What you soon find out is that the riots were a cover up for the true crime. I’ll leave it there so as to not ruin the story. This is the first installment with the second part listed as coming soon on their website (www.watchmenvideogame.com). The episodic release of games is the newest rage, so lets hope that future episodes make up for the sins of the past. Twenty dollars is a lot to pay for a shallow experience, and it will be hard to get people to come back to the fold after this release.

But on to the present. This is a true beat’em up action game full of vigorous button mashing combos that are true to the genre. The two characters differ a bit on the fighting style with Rorschach able to pick up weapons like crowbars, bats, and bottles verses Night Owl pulling out the kung-fu chops with added tech abilities.

I would have liked to see more cooperative moves between the two. I would have also liked to have had the option to sprint instead of always moving at a steady jog. Rorschach also lacks any type of crowd controlling combat which often ends up with him being mobbed.

My biggest beef with Night Owl is when it comes to using his grapple gun, apparently he is not able to use it just anywhere but instead you have to find an arbitrary point in the area to stand on before you get an on screen prompt. The action is steady with the storyline progressing at a quick pace.

One of my complaints is that the game is too short to justify the price you pay. I understand this is the first part, but to make this halfway worth twenty dollars, I hope to download part two at no cost.

The characters are voiced by the actors in the movie which gives the game more authenticity, if you are into that sort of thing, or the movie. The story of the game did not feel true to the original comic though.

The graphics however are leaps and bounds better then the original DC release in the cut scenes.

This is one game that made me feel rushed while playing it. The only thing that slowed me down was my Xbox messing up and freezing, which I’ll be receiving a "coffin" in the mail soon to hopefully fix that issue. The game itself did not freeze up, but did have a few glitches that I was able to verify was coming from the game by downloading it on my husbands 360 thanks to accessing my download history.

It was nice to see the "finishing" moves in slow motion but that still did not add to the overall enjoyment of the game that in the end was just, well" dull and repetitive!

In the end, I would not advise getting this game until the conditions dealing with part two are announced. In other words, if part two is free to part one owners, then both might be worth the price, but if you have to pay for part two as well, then the cost is not really justified. To overprice a product with the economy in the state it is now is just plain irresponsible.