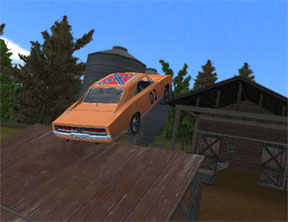 Dukes of Hazzard:Return
of the General Lee

The Duke boys are back in one of Hazzard County’s finest redneck renditions of a videogame, "The Dukes of Hazzard: Return of the General Lee." This game is honest to goodness everything fans enjoyed so much about the hit TV series in the early 80’s. Bo and Luke are still being chased by Hazzard’s bumbling boys in blue, Sheriff Rosco P. Coltrane and his long suffering deputy, Enos Strate. Crazy Cooter still fixes up just as many cars as he wrecks. To no one’s surprise, Boss Hog is still up to his low down dirty tricks and, of course, nobody’s wearing those "dukes" like Daisy Duke is wearing those "dukes." Yeeeehaw!

Now, lately there’s been a lot of "review bashing" going on about "TV-to-platform" titles but let the buck stop here. "The Dukes of Hazzard" does not disappoint. Ubisoft has done a "kick-butt" job of bringing the series from the big screen to the "electronic canvas" for all gamers to enjoy. It’s been years since I’ve even seen the show and yet, from the moment I booted up this title it’s brought back a ton of older fonder childhood memories.

This time round Bo and Luke are fighting to keep the Hazzard County Orphanage from being closed down by the unscrupulous Boss Hog. Desperately in need of financial aid, Sally Jo, who heads up the county orphanage, turns to the Duke Boys for support. Bo and Luke put their heads together and come up with a solution to get the finances the orphanage needs by entering the "General Lee" into Hazzard County Derby and bringing home the big prize money pot.

But of course, Hazzard is a small place and it’s not long at all before Boss Hog and Rosco catch wind of what the Duke boys are trying to do.

Boss Hog knows that the legendary General Lee is easily one the fastest cars to hit the track and so with the help of his overly loyal and gullible law officers, Boss Hog sets out to lay a web of "foul play and crooked justice" to thwart any attempt to save the orphanage. So that’s how this venture starts out. However if you’ve watched the T.V series, then you’d probably know by now that in Hazzard county there’s always more to the story than meets the eye.

The game itself is absolutely a work of art. It’s as if Ubisoft systematically mapped every inch of Hazzard county from the real show. There are many areas in the game that you will find strangely familiar to memory. The scenery really sets the mood and helps capture that "special essence" the show had. Long and hilly dirt roads, rocky shortcuts, sprawling tree growth, nature-constructed high-fly ramps, and beautiful sunsets keep things interesting while wheeling around the countryside. You can top all that great scenery off with highly polished and true-to-life character models and a super sharp selection of hot rides.

The overall audio presentation of the game in fantastic. All of the character voice overlays are crystal clear and seem to be taken from the actual actors of the original series. You’ll get an ear full from the entire cast of the show before it’s over with. A lot of times between scenes or during high-speed chases you’ll find yourself laughing at the old-fashioned antics of characters like Boss Hog, Sheriff Rosco, Cooter, and Uncle Jesse. Aside from dialogue, the roaring engines of American muscle cars and tires sliding furiously across a dirt road is a sound that any D.O.H fan would love.

There’s plenty of action to get into before the climax as the game features a healthy fifteen adventures. Now you would think that a racing/adventure game like this would have you driving all over the place till you were just plain sick of it. Well it does! But this time, IT’S A GOOD THING.

This game has so many ways to enjoy southern life on four wheels. Each adventure comes with a new type of driving challenge to help you hone your skills and to further advance a surprisingly solid storyline.

You’ll find yourself caught up in everything from high-speed car chases, off-road errand runs, and circuit races to carjacking, car tailing, jail breaking and whatever other kind of things you can find to raise a ruckus. The really rewarding factor comes with learning the country roads and memorizing the shortcuts. The game becomes that much more enjoyable as you gradually master the road. Nothing is sweeter than outracing and losing a fleet of patrol cars down the wild stretch of one of your favorite shortcuts.

During some missions you can earn upgrades for the General including a new set of tires, a top rate transmission, dual carburetors, and the addition of a "moonshine-fueled" turbo. Upgrading your ride will enable you to get more air and nail those tough long jumps to earn higher "stunt scores." Jumps are scored based on height, distance, speed and rotation. With vehicle upgrades in place you can improve your stunt scores by going higher and faster while sounding "the horn" and landing well.

As you progress through the game not only will you have the opportunity to drive five variations of the General Lee but you’ll also get the opportunity to get behind the wheel of vehicles belonging to other stars of show like Uncle Jesse’s Pick-up truck, Daisy’s Roadrunner, Cooter’s Tow Truck, and Rosco’s and Enos’s police cars, each vehicle having it’s own set of unique attributes.

The bottomline is D.O.H. will more than satisfy any hardcore followers of the T.V series. If you’ve seen it in the show, you can truly do it in the game. It’s all there. There is nothing left for the wanting except a sequel sometime down the road. This game is a sleeper hit for sure.

It earns 4 + Gin Gems, more than enough to save the orphanage. Enough said. Y’all, come back now, ya hear. Yeehaw!