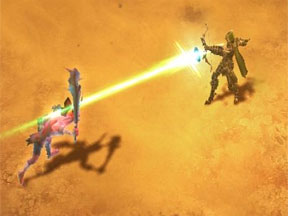 Diablo III for consoles is awesome. I figured we should get that out of the way right from the start. Those of you who remember last year’s launch of Diablo III for the PC and Mac, know that there were a few problems initially, though the game was ultimately successful, earning 4 1/2 GiN Gems in its review here, and being voted as the PC Game of the Year.

Moving from PCs to consoles is a rarely trodden path in the industry. Games seem to make the jump the other direction much more often. But Diablo III plays so well on the PlayStation 3, where we did our review, that one almost has to wonder why it wasn’t released for consoles first. Perhaps Blizzard learned from its PC-launch mistakes, but it just seems so much smoother now that one would never guess that it’s been "ported."

In general, the game itself is the same, which means that it’s a good story presented in snippets as you complete quests, and there is a lot ground to explore, monsters to kill, alternate and sometimes random side-dungeons to conquer, and a lot of loot to grab along the way. Plus there are many hours of gameplay, even if you don’t plan on going through the game multiple times with increasing difficulty levels.

One difference now is that being on the Xbox 360 or PS3 means that most people are able to plug the game into their televisions instead of their computer monitors, and that probably means a bigger screen. Graphically, Diablo III looks amazing, not just the environments or the monsters, but the spell effects especially are off the charts in terms of being a visual spectacle. They seem made for the larger TV monitors, without a hint of pixilation anywhere from edge to shining edge.

The PS3 also had no trouble rendering monsters, even when mobs upon mobs would swarm. At one point in our run-throughs, or actually at lots of points, there would be skeletons charging, bats flying in overhead and evil cultists casting spells all going towards the characters while flaming arrows, a barrage of magic missiles that looked like a SAM battery on overload, waves of force and a Tasmanian devil-looking barbarian with an axe spun out the other direction. Not once did the console even skip a beat.

But perhaps the biggest advantage to having Diablo III on the console over the PC is the ability to have true in-person multiplayer, with everyone in the same room and on the same screen. Remember when consoles first came out and there was the great promise of being able to have all of your friends stuffed onto your couch playing together? But how many games over the years actually offered this? And of those, how many required a split screen interface that most people find a bit confusing? No, Diablo III allows for up to four people to play together from the same console within the same room. You are even given bonus XP and an increased drop rate as a bonus for grouping. How cool is that? Of course, you can also host games over the Internet and group up that way, but let’s look at same-room multiplayer, since this is a function that trumps the PC.

On the PS3, to have multiple players, each person needs to have an account on the machine. That is not too big a deal, but it may require you to add an account for your friends, even if it’s only to play this one game. You can create an account in about thirty seconds and the local ones don’t need to be attached to the PlayStation Network or anything like that. The game will simply ask you which local account to look at for characters when a new person joins, and save all their character data there.

When playing in multiplayer mode with friends, the NPC companions like the Templar and the Scoundrel can still be located, but they will remain in town unless you decide to adventure out on your own, whereupon you can recruit them to come along and equip them, just like on the PC. Having played the game with an NPC companion and with real players, I can safely say that human players are by far more kickass. Not only can you shout to your friend "Larry, watch out that goatman is coming up from behind, put some fire on him!" but generally the player characters are going to be much more powerful than the NPCs. Add in a real brain plus player skill, and its easy to keep ahead of even a hoard of monsters.

Since you are playing on the same screen, the game teleports anyone who gets too far out towards the edges back to the center, so the players never separate. In a two player game, you can even use that as a sort of cheat. If one character is stuck surrounded by monsters you can use that little trick to pull them out of danger, though this is a pretty rare occurrence.

Picked up gold is shared among the group, though items are grabbed on a first come, first served basis. You can’t hand off items directly to other players, but if you are playing a monk and grab a wizard’s hat, it’s easy enough to drop it so your friend can scoop it up and put on their new gear.

Inventory management has also been greatly simplified, probably to make up for the fact that you don’t have access to a mouse on the console, so you can’t simply point at what you want. But items are held according to body part, so all the hats are in one place, shoes in another, shoulder guards in yet another. A window shows what item you are currently wearing and lets you compare others to it that you are holding. Pressing X switches the gear automatically. Pressing triangle drops it, perhaps so someone else in the group can pick it up. Vendors are also smarter now, so for example the blacksmith will automatically sort everything that he can break down into magical components when you visit him, so you can easily chuck it all into his forge.

The sound is also pretty good on the console version, though NPCs that travel with you as part of the story tend to tell the same stories over and over again. If I have to hear about Leah talk about her bloody inn one more time… Other than that, the sounds and the music are all excellent, just like in the core game.

One controversial item from the PC did not make the jump to consoles, and that’s the auction house. I have mixed feelings about this because I actually enjoyed the auction house, which had an in-gold side and a real money side. On consoles, the only way to trade items is to give them to others inside your multiplayer game. You can also give gold. Many on the PC thought that the loot drop rate there was too anemic so as not to overload the auction house, and of course many of the early problems with the game were auction house related, so it’s probably just as well it was dropped. There would probably have been security issues too on the consoles, especially if real money was being traded.

One thing that is obvious to anyone who played both versions is that the console version drops a lot more good loot. One little run through an optional goat man cave on normal difficulty yielded five yellow items and an orange (which needed to be identified.) About half of all the gear picked up was at least blue. So it seems like Blizzard wanted to make sure that console players were able to get enough loot natively, since they could not buy it from the auction house. We had no trouble keeping a four-player party equipped fairly well for an entire game. Nobody ever had exactly the loadout they wanted, but nobody was hurting for gear either. So it was a good balance I think that kept us turning over rocks looking for better gear, but never really falling behind in terms of what the monsters could dish out.

Diablo III was a really great game on the PC. It keeps everything that made it great (unless you were a huge fan of the auction hall) for its leap over to consoles, and adds in a streamlined interface, the ability to play on a large television, and real same-screen local multiplayer not found in very many titles these days. It’s entirely conceivable that four friends could get together and just jam out playing Diablo III for hours on end, sort of a mini game LAN party, with only once console and multiple controllers needed.

With all the advantages of the PC game, a bunch of nice additions, and the elimination of the flaws of the original release, Diablo III is set to become a console powerhouse and multiplayer favorite. It bumps up its PC score, giving it 5 GiN Gems for the console release and our high recommendation, especially if you have friends or family to play alongside.