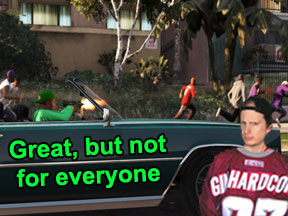 GTA V: An Awesome Game, But Perhaps Not For Everyone

I can tell this column is going to draw a lot of ire from gamers out there. But with recent events that have occurred recently I wanted to get my point out there.

Yes, I am a fan of Grand Theft Auto. I have played every game in the series since it went 3D with GTA III. Yes I enjoy the sandbox nature of the game. Yes I enjoy taking time to just listen to all the radio stations the game has to offer, and yes I usually have it on my best of the year list every time a new game comes out.

And yes, despite what others may say, I still list Grand Theft Auto: Vice City as my favorite GTA game of all time.

Even with all the future GTA releases, as well as spinoffs such as Red Dead Redemption, I still went back to Vice City as my go-to game. And while I may have given GTA IV a 5-gem rating, when I look back at it, there were some elements that I did not care much for. One of those issues I had was with all the calls I got from Niko’s cousin Roman always wanting to go out drinking or go out bowling or something else similar. It became way too annoying and made me wish someone would shut him up for good.

And we all know how that went, at least in my ending. That was another thing I didn’t care much for. The ending was pretty disappointing.

Since then I have been involved with many other sandbox style games: Prototype, Crackdown 1 and 2, and most recently Saints Row IV. With the possible exception of Saints Row IV, and even excluding that is a stretch, they all started to feel the same to me. But at least Saints Row IV has the guts to say "you know what, we’re called a GTA rip off for far too long, so frak it, we’re going to just go crazy and break all the rules." Maybe by doing that, Saints Row IV got more attention from me that GTA V has.

Ok I know what you’re all saying, I’m a GTA V hater. I’m not a gamer and I’m going to go off on this series as I have with Final Fantasy and Assassin’s Creed. That’s not the case here. I will eventually play GTA V, whether it arrives as a review copy or if Gamefly ever sends me a rental copy. But I’m not like everyone else who is waiting in line and talking non-stop about it.

And yes there are several factors to why I am not looking forward as much to GTA V as others have. One of which is I already have a lot of other games on my palate that I need to finish and review before I get there, like Saints Row IV. But there is also the obvious false advertising that Rockstar is using for Grand Theft Auto V. How many ads have you seen on television that mention that GTA V is coming out on Xbox 360? NONE! They are only advertising the PS3 version. That’s right, Rockstar is going the way EA used to (and have since changed) and making the game look like a PS3 exclusive. Nice way to lie to your customers, Rockstar! I’m glad to see you care about those who are playing on the Xbox 360, let alone the PC, who are not even getting GTA V, despite a heavy demand for it.

Then there are the rabid fanboys out there who are going off on some of the professional reviewers. Now you all know my stance of sites such as IGN and Gamespot, and how I instead favor the independent reviewers. But this is one case where I’m going to defend Gamespot. When Carolyn Petit, a transgender game reviewer, reviewed GTA, she gave it a 9 out of 10. Let me state that again, SHE GAVE GRAND THEFT AUTO V A 9 OUT OF 10! According to Gamespot’s score, a 9 out of 10 ranks as an Editor’s Choice game. If I developed a game, and it got a 9 out of 10 and rated as Editor’s Choice, I’d be ecstatic. But no, there are tons of fanboys out there who want Petit fired, just because in her review she found the game misogynistic! Then again these are the same type of people who ended up giving Jeff Gerstmann death threats just because he gave Twilight Princess a very high 8.8 out of 10. It just sickens me that people are that insecure in a game score, and anything less than a 10 (or 5 Gems as far as we’re concerned) is considered bad. Carolyn has an OPINION about GTA V being misogynistic, and though I still have yet to play GTA V (which I hope to soon) she does not deserve all of these threats or petitions asking for her to be fired. It’s just possible that someone else may not want to play the game because they will feel the same way, and Petit simply makes that point that it’s a great game with some issues so that not everyone might enjoy it.

Thankfully, change.org has taken down the petition, but will that stop another rabid fanboy from reposting it? Doubtful.

I can see that I’m probably going to get threats that I should be fired from GiN for speaking my OPINION. It hasn’t been the first time this has happened. But yes, eventually I will play GTA V. It’s only a matter of time, and believe it or not fanboys, not everyone is going to like it. I might, I might not, but what I say in my review is my opinion. I just wish there are people out there who will actually accept that.