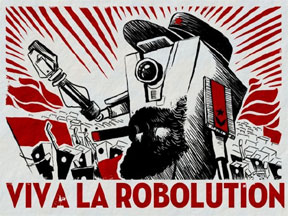 Given the incentive of new content to dive back into Borderlands, I was salivating at my opportunity, but the downloaded content [DLC] for the title has had some hits and misses.

For example, the Zombie Island of Dr. Ned was beyond amazing and The Secret Armory of General Knox was decent, but Mad Moxxi’s Underdome Riot kept shaking my interest like a furtive skag.

For their latest installment, Gearbox broke out the hinted-to ninja claptrap in order to bring the faithful back to Pandora, but its overall punch is somewhat lacking in the execution in some places, while overwhelmingly gratifying in others.

The idea behind Claptrap’s New Robot Revolution is that the claptrap CL4P-TP, Interplanetary Ninja Assassin has incited the robotic masses to rebel, and in doing so transformed all your favorite minion attackers-such as skags, Hypernion soldiers, rakks and raiders-into claptrap hybrids.

As far as premise, the story is up to the hilarious standards of wit and creativity one comes to expect from Gearbox.

In CNRR, we find that Mr. Kincade, the head of the Hyperion corporation has had enough of the "Robo-lution" and is enlisting you to put an end to the troublesome claptrap.

As with the storyline’s successful execution, the same can be said of the level design found in this DLC.

Be sure to check out the visual of the large robolution pirate ship in the Hyperion Dump section of the level.

However, when it comes to innovative character design, umm… depends on if you’re okay with rehashes of bosses and characters you’ve seen in previous portions of the game, albeit with a slight visual change.

Yes, indeed, Dr. Ned, General Knoxx and Commandant Steele all re-emerge as minion bosses in this new chapter, leaving the gamers of Pandora with both a feeling of humor and disappointment. Humor (especially in the case of Gen. Knoxx) because of the absurdity of zombie robot enemies; disappointment because we’d hoped for something new and shiny.

The claptraps themselves also come after you in droves, and they are quite funny with the various pop culture references that they spout from "Exterminate!" al la Dr. Who to "Come with me if you want to die!" which is a twist on a Terminator catch phrase.

Beyond this, the gameplay is what you’ve come to know and love about Borderlands, and the missions are engaging enough to keep gamers blasting away for hours. Now, if only Dr. Tannis would stop sending you out to collect 150 claptrap parts for her crazy inventions. Ugh…