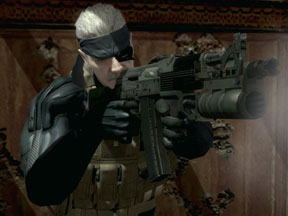 Upon finishing Snake Eater back in 2004, I was able to learn more about the background of what would eventually become known as the Patriots. But still there were a lot of questions to be answered. What happened with Raiden, especially after seeing the E3 2006 trailer debuting him as a cyborg? Why does Snake look much older than he did at the Big Shell? Why does one of the latest trailers feature a setting that looks like Shadow Moses Island? And most of all, will we finally have a sense of closure at the end, or will there be more questions that need to be answered?

But in my quest to answer all of these questions, I endured upwards of 20 hours of some of the most exciting gameplay, intertwined with one of the greatest storylines to ever come out of a game, even surpassing that of past MGS titles.

While we are taken back to the past in MGS3, here we are set five years after the Big Shell incident. It is 2014, and as Snake says in the very first line, "war has changed." War is now done as part of the global economy, and rather than fought among nations, they are now under the control of private military corporations (PMCs.)

Equipped with weapons that are ID tagged and injected with the "Sons of the Patriots (SOP)" nanomachine system, they are hired to take part in military operations in order to profit in the "war economy." Five of the largest PMCs (Praying Mantis, Werewolf, Pieuvre Armement, Raven Sword, and Otselotovaya Khvatka) are all operated by a dummy corporation called Outer Haven, with Liquid Ocelot (voiced by Patric Zimmerman) in control. Since Sons of Liberty, the essence of Liquid Snake left behind in Ocelots grafted arm has completely taken over his consciousness. Assuming full control, Liquid plans an insurrection by taking over the SOP system.

That’s where Snake (David Hayter) comes in. Rapidly aging for some unknown reason (but showing symptoms of Werner’s Syndrome) we see him at a gravesite, but is interrupted by his close friend Otacon (Christopher Randolph) and former colonel Roy Campbell (Paul Eiding) who offers Snake one final mission. Or in this case, a hired hit. His target: Liquid Ocelot in the Middle East before he starts his insurrection.

Arriving in the Middle East, Snake is thrust into the middle of a war zone, with local militia forces battling against the Praying Mantis PMC. It is here that we realize that this is not the MGS that we are used to. Sure Snake can sneak around unnoticed, but unlike before, being detected doesn’t mean hiding to survive. Snake can also decide to take part in combat for the militia, eventually winning them over and making them allies against the PMCs, who due to ID tagging, cannot be won over.

Eventually Snake will come across two new key items to help him in his mission. The first is Metal Gear Mk II, a miniature guidance robot and communication device (capable with built in monitor with connection to Otacon) and equipped with an electric prod to shock unsuspecting troops. The other item is the Solid Eye, an eye patch capable of showing field data, as well as functioning as either night vision or similar to binoculars.

Snake’s new Sneaking Suit is equipped with a technology called Octocamo. Following up on the camouflage system from MGS 3, Octocamo can mimic any environment that Snake is in to help blend with his surroundings. All it takes is lying in place for a second or two, no longer do we have to navigate a series of menus.

Snake’s main point of contact in the Middle East is Rat Patrol Team 01. Led by former acquaintance Meryl Silverburgh (Debi Mae West,) Rat Patrol also uses the effects of SOP in order to act as one cohesive unit. All except for one member, Johnny Akiba (Beng Spies,) who bears a striking resemblance to a soldier first encountered at Shadow Moses.

In addition, a new character, Drebin (Khary Payton) comes into play. Working as a gun launderer, he is capable of removing the ID locks that PMC weapons have for a small fee, or in exchange for surplus weaponry that Snake acquires during battle. New weapons can also be purchased when the profits acquired from Drebin. While it might make it easier to get new weaponry compared to the old on-site procurement, it does add more action to the game.

And action is definitely prominent. With the capability to fight it out as opposed to sneaking, the game does take a more action oriented approach at times. Some people even compared it to playing GRAW, and in my opinion, there is nothing wrong with that. And then of course there are the boss battles. The MGS series is known for its unique boss characters. Who could forget the battle of attrition in MGS3 against The End? Or the captivating final showdown with The Boss? MGS4 features the Beauty and Beast (B&B) Corps. Four women who have suffered severe post traumatic stress disorder, they have to hide themselves inside metallic bodies. They are Laughing Octupus, Crying Wolf, Raging Raven, and their puppet mistress Screaming Mantis. In addition, the return of MGS2 pain Vamp (Phil LaMarr) makes for a difficult opponent. But of course, there is also the return of Vamp’s sworn rival, the new and improved Raiden (Quinton Flynn.)

The Raiden of old is thankfully gone! We may remember him as a whiny greenhorn who had to endure the annoying questions of his past girlfriend Rosemary (Lara Cody,) but he has suffered tremendously since then. Knowing that Rose suffered a miscarriage and is now dating Campbell, a fact that even his own daughter Meryl resents, Raiden is now a recluse. And with a new ninja exoskeleton, Raiden’s first appearance in MGS4 changes his reputation from wimp to complete badass. His new persona is highlighted during two amazing split screen action sequences, something that I never thought possible in a game.

And it’s not just the split screen events that look amazing, it’s the whole game in general. Being the first game that I can say truly tests the power of the PlayStation 3, MGS 4 is a visual masterpiece. There were times during the game I wanted to pass off the cut scenes as FMV when almost all of them were done in real time. Even those that actually are FMV I thought were using the real time engine.
Even during combat, the game looks stunning. War torn cities feature destructible environments and hordes of soldiers and mechanical units with nary a sign of slowdown. I recall one trailer at E3 2006 where Snake fought against, and eventually hid from, one of the new Gekko walkers. The frame rate got nasty at times, but two years later a lot of work paid off as the slowdown was completely gone.

And with a great look also comes great sound. Once again the Metal Gear Solid tradition of amazing voice acting comes into play. Most of the cast from past MGS titles returned, with the obvious changes. David Hayter’s performance as Old Snake is adequate for a character who has aged thirty years faster than he should have. Quinon Flynn’s performance of the new and improved Raiden deserves special mention as well as that of Patric Zimmerman taking over the role of Liquid (a position formerly held by Cam Clarke, but come to think of it, using Ocelot’s original voice makes more sense.) But perhaps my favorite two characters grouped together were that of Meryl and Johnny Akiba. Performed by Debi Mae West and Beng Spies, they both feature one scene in particular that epitomizes all that a great action film or game is capable of. Think of them as the Nan machine soldier’s version of Mr. and Mrs. Smith!

But one note of interest that really took me by surprise was the way the game features live action footage at the beginning. While the parody of Millionaire and the nature footage about the octopus might be interesting (a hint of the Octocamo suit that Snake uses,) it is a parody of Inside the Actor’s Studio that got my attention, as it features a mock interview with David Hayter himself! He even mocks the use of Solid Eye by wearing an eye patch during the interview (and even using it to watch a baseball game, for crying out loud! Genius!)

The soundtrack by Harry Gregson-Williams is also top notch, Right from the title screen’s performance of "Old Snake," we get a feel for the soundtrack of a dying hero. It continues with the entrancing "Love Theme" that plays in the opening credits and culminates with the beautiful if not sad "Here’s to You," a perfect send off for a great series.

When I reviewed MGS 3 I said that I dare anyone to not break down during what I thought was the greatest ending of any game. I retract that previous statement because the ending of MGS 4 is phenomenal. Although it might be one of the longest endings I have seen in a game, it is well worth the price of admission, and like any good movie, make sure to stay during the end credits for a huge surprise.

But in the end, is there closure? Is this truly the end of the Metal Gear Solid series? And if so, was it worth it? Without a doubt the answer is a resounding yes! It is ironic that Guns of the Patriots came out during the middle of the summer movie season as it’s truly the blockbuster that we have come to expect. It is now time for Hideo Kojima and Snake to take a long deserved rest. They earned it!