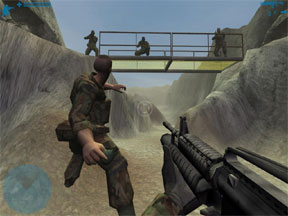 The first-person shooter market at present day is literally a battlefield for competition. That being said, if you want anyone to respect your title, for starters, you’ve got to bring some major firepower, some seriously dynamic and ground-breaking game-play, and a beastly audio package. On top of that you have to produce some killer-next generation graphics and then hammer out a compelling storyline to help keep things interesting. To hit the field with anything less than all of the above should only be considered to be "genre suicide."

Before Groove Media and Direct Action Games decided to bring "Combat Task Force 121" to the frontlines someone should have pulled them aside and politely let them know that when it comes to FPS games, quite simply, "this is where the big boys play."

It’s not surprising that the game’s only strength lies within its graphics engine which comes out on top as respectable but certainly far from perfect.

The game hit shelves at a tempting retail value of $20 dollars and so it only makes sense to bait game consumers in with a little eye candy help seal the deal. The in-game graphics are fairly top-notch featuring sharp 3D environments and a nifty looking handful of weapons.

Combat 121 is more or less depicted as a simulator type game of the real thing as opposed to the arcade style of shooter games players have been exposed to in the last months. If you’re one of those hardcore militant gamers you’ll find the post gulf war environmental situations and your true-to-life weapons arsenal do much to set the tone of the game.

The only major turn-off in the graphics department is the "bobble-headed" commander who gives you the missions briefing between stages. The physical features and animations of his face are absolutely the most horrific thing I’ve ever seen in a 128-bit game.

For starters he has very poppy eyes, hardly any eyebrows and absolutely no facial hair. Quite simply it looks like his entire face was bikini waxed"by a blind man. On top of that when he talks the top of his head bobbles up and down while his lower mouth is almost motionless. I haven’t seen anything like that since "paper bag puppets" back in grade school.

It’s all down hill after graphics as this simulation shooter begins to break down and go terribly bad in all the wrong places, mainly in the game-play department. For starters while in-game mobility is fast and fluent, the controls are very noticeably sticky making it pretty frustrating to target multiple enemies in certain combat situations.

It’s very easy to over or under-project your cross hairs when trying to fix your sights on groups of bad guys. These kinds of combat situations more than oft lead to death as, in the name of realism, it only takes literally a few shots to knock you off. On top of that, after only approximately a half an hour of dealing with this "fast-but-excessively-sticky" game play, the camera angles begin to make even a veteran FPS gamer feel slightly light-headed and nauseated which of course deals a serious blow to the fun-factor of the game.

The lack of enemy encounters also adds to the stagnancy of the game play. During most of the missions you always feel like you’re only up against a handful of enemies. When you do have an encounter they’re usually extremely short-lived so you don’t really get a chance savor the moment or unleash the full potential of your weapons arsenal. There are some levels of the game where there are so few enemies that if you’re good enough you can go through the entire level with just a knife as you can kill your foes with just one well-placed short jab.

As if things couldn’t get any worse in the game play department, Combat 121 is littered with weak puzzle-solving situations. Nearly every puzzle in the game can be solved with a "door key," a pair of "wire cutters," or a "security card." Most of the time you can find any keys to open locked doors hanging on the wall or a security card needed to get passed a coded door on a desk a few rooms back and then wire cutters make short work of bomb wires and other miscellaneous hot-wire electronics. Outside of those three basic puzzle-solving scenarios the game doesn’t have much to offer in the way of mental challenges making the single-player mode inevitably dull and unfulfilling.

Groove Media and Direct Action Game’s attempt at a multiplayer mode doesn’t fair much better than the single-player mode either. There’s hardly anything innovating about the game modes for the multiplayer campaign. Even though these modes have been successful in the past, we find ourselves treated to the same ole’ routine multiplayer modes as seen before in other games, like "Capture the Flag" and "Death Match." There is only one mode that strikes an interest known as "VIP guest" mode. In this multiplayer mode one team member will play the role of the VIP guest while the rest of the team safely guards and transports him from one safe point to the next. The VIP carries only a handgun. The goal of the opposing team is to do everything in their power to keep the other team and their precious VIP cargo from reaching the safe point in tact. You can have some decent fun in that particular mode but it’s just not enough make the multiplayer aspect of the game respectable.

With that said, it all boils down to this. Even for a budget game Combat 121 just doesn’t cut it. Fairly respectable graphics, poor game play, weak puzzle-solving, and lack luster multiplayer modes are probably going to leave this one on store shelves collecting dust long after this review is over. With such a strong line-up of FPS shooters out there I would even be hesitant about recommending this game to enthusiasts of this particular genre. A weak 3 GiN gems is my final score on a game that needs some serious back-up.