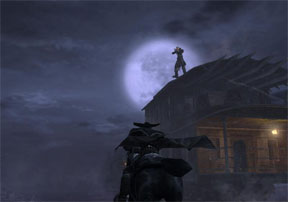 Wow. It has been a very long time since any console game has captured my attention so thoroughly, much less a console shooter.

Darkwatch follows the adventures of aptly named Jericho Cross. He is a gunfighter who decides to rob an armored train, thinking that something as guarded as that train must be carrying some serious loot.

Unfortunately for Cross, the train is actually owned by the Darkwatch, a secret society that has existed since the fall of the Roman Empire whose primary purpose it so fight vampires and other undead kin. The train is carrying Lazarus, the founder of the Darkwatch who is now possessed by a demon and basically is the head vampire. Jericho also finds the train under siege by an army of undead creatures hell-bent on freeing their master.

Most of the Darkwatch on the train are dead, but that does not stop Cross from trying to complete his mission. He blows open the vault, freeing Lazarus and creating a whole mess of trouble for the West and himself. Instead of killing Cross, Lazarus lets him live, but infects him with a vampire curse.

Cross pretty much has to join the Darkwatch, which halts his slide into becoming an undead gunfighter. But to end his curse he must kill Lazarus.

Being a partial vampire is not too bad actually. You get a lot of neat powers like the ability to jump really high into the air to reach roofs and other places that mortals can’t get to without a ladder. He can also use special vision to see through fog or darkness. But the most important power is your blood shield. You regenerate the shield over time and when you get shot or slashed in combat, the shield will take damage before your actual health does. This gives you an extra layer of protection similar to games like Halo or Mace Griffin.

Because this is the old West, the guns and weapons available to you as you cut through the undead army in your path are primitive compared to today’s standards. But the Darkwatch has an army of scientists that have created some pretty advanced weapons that blow away anything else from the same time. Each weapon also has a blade, so if a vampire gets too close, you can use your gun as a hand to hand weapon.

The game controls were surprisingly easy to pick up. I have always had a big problem with console shooters. On the PC I simply use the mouse and am a great shot. But on the console I find it hard to aim and shoot. This is not so much of a problem with Darkwatch. The enemy creatures move at reasonable speeds, and it is not difficult to track them and shoot accurately. I never noticed any slowdown even on levels were a lot of stuff was coming at me at the same time. And if something does get close, cracking them with the blade of your weapon works pretty well too.

There is also a lot of variety in the various levels. Some take place on horseback and have you shooting and riding. In some you get to drive a steam-powered wagon. In others you will be up close and personal with your opponents and in a few you are actually outside in daylight and have to move from shadow to shadow to keep out of the deadly sunshine. Some levels will find you on the offensive, while in others you are tasked with defending an area or some people from all comers.

The graphics are really well done. The undead you bash or shoot look great. They are scary, but very satisfying when they fly apart or splatter under an attack from your shotgun. There are also some nice environmental effects like moonlight, fire and of course lots of shadows.

The music is good and appropriate for whatever level you are on. It sounds like a Clint Eastwood movie a lot of the time, which is great in a game set in the West.

As you adventure for the Darkwatch you have the choice to follow the patch of good or evil. Don’t expect any real deep role-playing. You are mostly given a cut scene where there is one very obvious bad guy choice and one good one. Then you are asked which you want to do. It does not take a brain surgeon to know which side your choice will benefit. If you are really bad you pick up a bunch of evil powers. If you are good you get good powers. Both sides are balanced pretty well, but I was expecting to see a little bit less in terms of linear gameplay. Good or evil, you pretty much have to follow the main plot without any deviation.

Thankfully the story is quite good and involves the horrors that people do, sometimes in the name of good as well as love and betrayal. All the good plot points that will keep you coming back for more action.

There is a multiplayer element to the game that is quite fun if you want to see who has better shooting skills among your friends. You can play locally on the PS2 or on Xbox Live with the Xbox version.

Who would have thought that cowboys and vampires would have gone so well together. Remember the name Darkwatch, because it is going to be a series that should be with us for a long time.