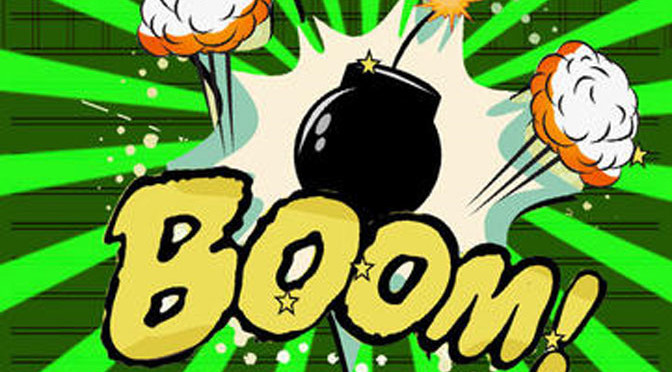 Shooting games have been around for a longtime, paving the way for countless other games. One of the classic stepping stones for these games is space invaders, a pixelated game, where the player plays as a space ship and has to shoot alien invaders.

Chirp Bomb for the iOS has gameplay resembles space invaders. The player selects a bird that looks like it was loosely drawn with colored pencils on paper and moves it forward, backwards, left and right on the screen. The bird shoots automatically without pressing or tapping anything. The player moves the bird where the enemies are in each level.

The enemies also look hand drawn and seem to be aliens, from a flying three eyed octopus to a flying saucer launching missiles. Each level has a giant boss at the end, which takes up part of the screen. The bosses have a classic health meter to show when the they are knocked out.

As mentioned earlier, the artwork looks hand drawn in a loose casual style on paper. The backgrounds the bird flies through look like paper that changes from college ruled lining to grid lining.

The player has the ability to use a bomb by tapping the icon. The bomb is a giant bird that flies across the screen taking out enemies in its path. There are power up options that can be picked up throughout the game, such as a shield that creates a barrier around the bird, a pencil that shoots at your side, extra bombs and an increase in firepower.

One unique thing in Chirp Bomb is that the player can make their own bird or anything else they want as a character, for example a spacecraft or bus. To do this, in the main menu, the player has the choice to create up to three different birds. By clicking on the new birds icon, players are able to use the in-game draw pad or connect with their photos to create a new character.

While there may be countless arcade style shooting games out there, Chirp Bomb’s hand drawn graphics and control options takes it a step above the average game app and it’s surprisingly addictive. Chirp Bomb earns 4 out of 5 GiN Gems.