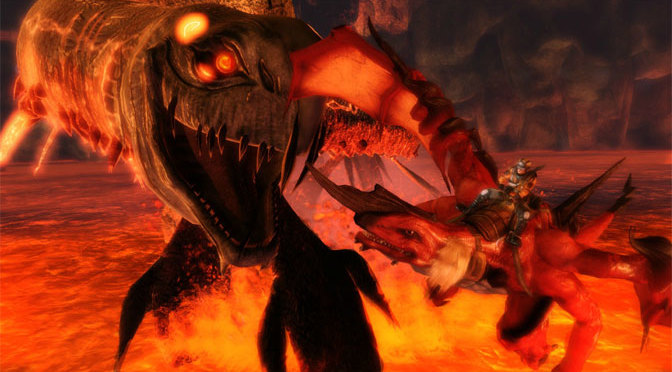 Crimson Dragon offers a unique perspective to the panoply of rail shooters available to gamers. Fighting your way through Draco, a planet slowly being taken over by the Crimson Virus, the player encounters a bizarre array of monstrous creatures that do not hesitate to send harmful power blasts your way. Sadly, flying a dragon seems wasted on a rail shooter that offers little in-game exploration.

Your main mode of transportation, and weapon-of-choice, is a Dragon that you are given at the onset of the game. Completing a level with a high grade of accuracy or by collecting a certain number of in-level glowing orbs gives you currency. You use this currency to purchase different food items and shield potions to help level up your mystical steed, or to upgrade to a different breed altogether.

As you slowly fight your way towards the white behemoth that serves as the initial antagonist, the player unravels a more sinister aspect. Corruption and political intrigue slowly take the place of ravenous beasts, in a metaphor that I found slightly heavy handed. Think Moby Dick meets Eragon meets any political thriller of the last twenty years.

The first time I played Crimson Dragon I found it incorrigible. The controls were overly sensitive, the graphics sometimes fell flat, and the overall story seemed clumsy. Fighting through an infected planet to provide salvation for it seemed weak to me, a trope already conquered by the Resident Evil franchise.  And yet, I came back to this game again and again. Being able to eventually evolve and customize each of your dragons offers a diversity of gameplay and greatly impacts how well you do on each level, of which there are many seemingly nested one into the other like those little Russian dolls, if they were large arenas of destruction instead of wooden figurines.

I do not consider myself to being a perfectionist, but for some reason I found myself re-entering already completed levels in the hopes of garnering more cash to get better dragons and to finish the game wholly.

While the evolutionary aspect of this game may be its saving grace, the music, on the other hand, was nothing to write home about. It possessed the same level of climactic late-‘90s electro synth-beats that so many Japanese arcade fighting games did that I couldn’t help but remember the smell of a greasy food court and the somehow sticky, yet crunchy, purple carpet of our local mall’s arcade. Nostalgia is a weird thing. I often played with the game silent, and could only imagine a more sweeping orchestral score.

Crimson Dragon is definitely worth checking out if you own an Xbox One and earns 3 GiN Gems.

Feel free to leave a comment below and tell me what you think.