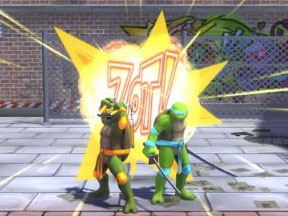 Back in the early 90’s, Konami’s arcade lineup could never be beaten. Look at all the games they released: Simpsons Arcade, G.I. Joe (which I really wish would have come out on XBLA alongside the movie,) Bucky O’Hare, and of course, the six player mayhem that was the first X-Men game. But it all started with a 1989 beat ’em up centered on four reptilian ninja brothers, Teenage Mutant Ninja Turtles. The original arcade game was a phenomenal release for Konami, and a hit both in the arcades and on the NES.

But no one knew what to expect when the sequel was released in 1991. When I saw it in action, the first thing I noticed was its title theme, complete with full lyrics. Now by today’s standards that would seem commonplace, but back then it was amazing to behold, even if the song was from the horrid TMNT "Coming Out Of Their Shells" rock concert tour. The game itself was the same four player beat ’em up style action from the first game, but at a much faster pace, and even incorporating Mode 7 style technology that was first shown in the Simpsons arcade game earlier on.

Turtles in Time also made an appearance on the Super Nintendo Entertainment System, and is considered by many to be one of the best SNES carts available. In addition, it is highly praised just as a beat ’em up. In fact, website ScrewAttack chose it as their #1 beat ’em up of all time. I might say otherwise, but it’s definitely in my top 5.

The original TMNT arcade game was released to Xbox Live Arcade two years ago in conjunction with the new CGI movie. It was a direct copy of the arcade version but it did have its limitations. The opening cut scene is mysteriously cut out midway through, and you only get one life in single play before you have to continue. However, the multiplayer mode gave 20 lives per player with no continues at all. Even with these flaws it was true to the arcade original, and for those who wear their "nostalgia goggles," like myself, it felt like I was playing it at the FSU game room again.

But Konami was partly involved with that one. With re-releasing Turtles in Time to Xbox Live Arcade, Ubisoft went on their own, enlisting Ubisoft Singapore to remake the game. Now unlike some "Daemon" reviewers on other sites who give a low rating on a game without comparing it to the original, I will speak as someone who has not only played and loved the 1991 classic, but will compare it to the equally good SNES version.

We all know the story of Turtles in Time. Krang abducts the Statue of Liberty. Our four heroes race off to stop Krang and Shredder. Shredder traps them in the sewers (unless you play on the SNES and he does so in the Technodrome) and banishes them through a time warp. In said time warp, they fight the Foot Clan and various other mutations through prehistoric times, on a pirate ship, a train in the old west, a futuristic highway on hoverboards, and a starbase before returning home to fight Shredder once and for all to recover Lady Liberty.

Yes it’s not much to talk about, but remember, this was originally made in 1991. Arcade games of that era were shallow, but with a group of four (or two on the SNES,) they were a lot of fun. I will admit though when playing on Xbox Live lag issues came into play. While on the "Buried My Shell at Wounded Knee stage," the characters I played with online were jumping around for no reason, and ending up running in midair in the background. I really hope this gets fixed in a patch.

Aside from this issue the game plays quite well, reminiscent of the original. The differences on Xbox Live Arcade come in the updated visuals and sound. Instead of using the 2D sprites from the original game, Ubisoft Singapore made the game entirely in 3D, while keeping to the 2D plane for combat. It won’t help those who wear nostalgia goggles while playing, but it’s passable. Extra animations such as the comic style text when an enemy blows up, or a Foot soldier hanging onto a hoverboard for dear life when he’s knocked down are a nice touch, but it still misses the charm of the original game. Sometimes animated sprites work better than 3D polygons, no matter how smooth they run.

Did I say smooth? Well, most of the time it’s smooth, running at 60 frames per second. But for some strange reason, certain stages, such as "Big Apple 3 A.M." run only at 30 frames per second, even with just one player. And even worse, when there are four players at once with a huge number of Foot soldiers, the frame rate tends to bog down. I know the game was delayed for two weeks to get ‘Splosion Man out first, but couldn’t they have spent the extra time to perfect the frame rate?

But despite the issues the visuals might have, they can be forgiven. What can’t be, however, is what was done to the soundtrack. The 1991 arcade game had one of the most memorable music scores known to gamers. Here it has been replaced by generic tracks that sound nothing like the originals. I really hope if this game does get an update they will offer the arcade (or even the SNES soundtrack) as an option. Voices are a little strange too. They aren’t as bad as the music but they too sound a bit off.

The last concern I had with Re-shelled is the price of the game. Originally priced at $15, negative feedback brought the price of the game down to $10 (800 Microsoft Points.) Still despite all the upgrades (or downgrades, as the soundtrack is concerned) the game should have been made available for 400 MSP, or $5. If that were the case the value rating would be much higher.

In the end, Turtles in Time is a bit of a disappointment, especially for those who have a love for the arcade original. It’s not terrible, far from it, as it is an enjoyable beat ’em up. More so if you have four players at once (and the online play can keep up.) But I just feel that the game could have been either a lot better, more true to the original, or at least a lower price of $5.

CONS: …when lag doesn’t take over. Frame rate erratic when too much action on the screen. They butchered the classic soundtrack in favor of generic music! $10 is a bit too much for this game, as $5 would be a better value.