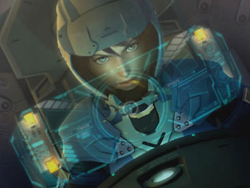 When I am handed a space fighter game to review I cringe. Sometimes they are fantastic and sometimes they are not. Right from the start Project Sylpheed reminded me of one of my favorite games of all time, Wing Commander, which had a great story and some really fun missions. So much so that you could almost forget that this game is actually based on a mid 1980s scrolling shooter franchise which probably ate a lot of quarters in its day.

I flipped through the manual at the staff meeting and things looked pretty good. A nice friend on friend rivalry is setup where you play Katana Faraway as he fights for the Terra Central Armed Forces (TCAF) against his friend from flight school, a guy named Margras Mason who changed sides and joined the ADAN Freedom Alliance after the Acheron Nightmare.

Katana is supposed to be right out of flight school and has just joined the carrier Acropolis. So when I got to my Xbox 360 I popped in the game for a quick look and decided that the tutorial looked like a good place to start.

And it does a really nice job of teaching you the controls, the heads up display (HUD), the weapons, and selecting targets, as well as some of the cool special moves you can make with your ship. And I also note that it did a good job of warning you about the dangers of using your special moves, which as a balance depletes your rechargeable shields. Overall I was very pleased with the tutorial and was feeling good about my fighting skills.

The story line is played out through cut scenes that run between the missions and the story line is really good, almost movie quality in terms of the plot and the "acting," at least most of the time. But for me it still left something to be desired. For example, right at the start of the game one of your squadron mates gets killed, and all of the characters are upset because they have known him for a while. But I felt nothing, because he had not been introduced into the story. They should have saved the death for a couple missions into the game when I could have gotten to know him and really felt his loss.

The missions are pretty run of the mill stuff for a space shooter. Destroy this ship or this many fighters. And while you have squadron mates and you can give them some rudimentary orders to attack or support you, you will quickly realize that if you want to win, you’re going to have to get into the center of the battle and do the hard work yourself. What I found annoying was that I think some of the missions had a time limit, but they do not share the time limit with you until late in the mission when they tell you to hurry up or the mission will fail. Occasionally you get to take on a rival ace or go after a big ship, and those missions can be fun and break the monotony a bit.

I mentioned some special moves earlier and those include a speed boost, a time slowdown, and another that increases your shields temporarily so you can ram other ships, but all of these completely drain your shields afterwards, so they can be helpful, but you need to time the use of them just right or the mission will fail anyways.

The following technique was recommended to me, and I am passing it on to you. If you really want to get the most out of the game, play through once on easy and get all the good weapons, then go back through and play the game again at the normal or hard level with t he cool weapons. There is a slight problem with balance in the game, and this will make things a bit better for you.

The graphics are less then stellar and even with that, the game still has the slow down issues when too many enemies get on the screen. The one thing that I did find helpful is the colored plasma stream that all the ships put out from their engines which makes them easier to see. This can get a bit annoying when you are close up to other ships, but I felt the benefit out weighted the negatives. As I mentioned before the cut scenes are really good and the voice acting is also very good. The background music is not stellar, but by no means is it annoying either.

Overall, if you are looking for a good space fighter combat game, you should pick up Project Sylpheed. It’s certainly not the best game ever in the genre, (Wing Commander, Privateer, Freelancer, and Darkstar One are all competitors) but it has some good points including easy controls, a good story, and a good tutorial. In games like this, a good tutorial can’t be underestimated. It’s mediocre in the mission area. And you may have noticed, I have not said anything about multi-player or Xbox live options. Well, that is because they are missing from this title, which cuts into the long term playability of the game.

Project Sylpheed earns 3.5 GiN Gems, a respectable score that should at least tempt you to give it a try if you really like the spaceflight and combat genre, or if you want to see what became of all those quarters you pumped into the arcade machine back in the 1980s.