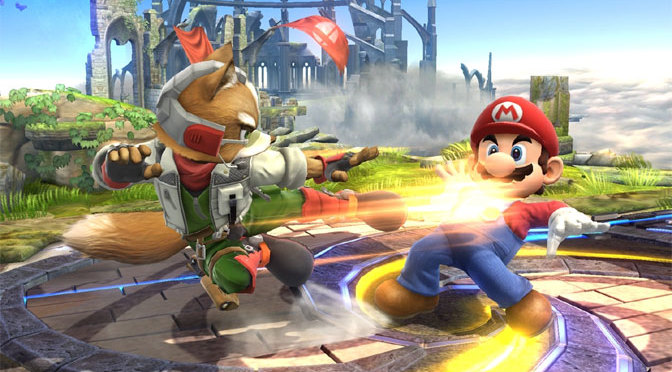 Super Smash Bros. for Wii U

Alright Smash fans! I finally got my hands on Super Smash Bros. for Wii U (Yes, that’s its official name.) after a few shipping issues. It actually worked out really well as I had a full house for playing the game over the Thanksgiving break.

A unique game mode that was added to Super Smash Bros. for Wii U is called Smash Tour. It’s basically a mix of Mario Party and Smash Bros. Players are put on a board and given a random stock of fighters. Every turn they roll dice and move around to collect items that will increase their stats. Other characters can also be picked up from the map and trophies can be used to give special effects for a player’s turn or a match up. The game ends after a select number of turns and has players duking it out in a free-for-all with their collected characters. It’s a neat little mode that’s fun to play at times, but it really just interrupts the fighting for moving around on a board.

Super Smash Bros. for Wii U also includes changes to its Classic mode. Unlike previous Super Smash Bros. games, two players can join in for Classic mode. This is a great addition as it allows more players to be involved in the game. It actually makes for a great way for me and Alia to play the game without having to fight each other. There are also two-player versions of All Star mode, Stadium and Events.

Classic mode has seen several changes in Super Smash Bros. for Wii U. Rather than go through a liner path and fight the enemies on it, players have the option of choosing to fight different groups in a tournament-style system. This makes for a unique experience every time. There are also rivals in this mode that will get tougher the more matches the player goes without taking them on. The final big change to Classic mode is the inclusion of a new boss called Master Core. When defeated on a high difficulty, Master Core transforms into a maze that players must navigate in order to find and defeat the boss.

That higher difficulty thing I just mentioned earlier is one of the only problems I have with the new Classic mode offered in Super Smash Bros. for Wii U. The game uses an intensity meter to allow players to set how hard they want the game to be. Higher difficulty means more money and prizes for the player if they are successful. Losing will result in the player losing some of their money and prizes. I’m completely okay with this. What I’m not okay with is the game forcing me to go to a lower difficulty when I lose. Every time the player loses in Classic mode, the difficulty is dropped by 0.5. I found this to be a really annoying feature as it refused to let me train against the harder levels in the game. I signed up for the highest intensity level because I wanted to beat it. That means I should be allowed to try until my banks runs dry.

Super Smash Bros. for Wii U’s Smash mode has been given an overhaul this time around. Players can now join in up to eight-player matches and the action can get to be a bit too much at times. I had seven people playing together and it became really easy to lose track of myself. I also have to question some of the choices for eight-player maps as some seemed relatively small for that many players. Outside of this small complaint, the game performs well. I didn’t run into any issues of lag and found there to be plenty of stages to play. I also liked the addition of Omega stages, which basically takes a normal stage and gives it a flat version similar to Final Destination.

Online play has improved leaps and bounds in Super Smash Bros. for Wii U. Players can make all the same choices online as they would in a normal Smash match. This is a huge improvement over the online play in Brawl, which only allowed for timed matches and little in the way of customization.

Super Smash Bros. for Wii U has a total of 50 characters. In comparison, Brawl had 39 characters and Melee had 26. Part of the increase in characters is due to the separation of characters that had transformations. This means that characters such as Zelda and Shiek are now completely separate from one another. The addition of several new characters is great and it definitely offers a lot of choices for new and returning players to the series.

Super Smash Bros. for Wii U offers a wide variety of character colors to choose from. This has been the normal since the start of the series, but it’s been taken up a notch in this version of the game. Some characters have really detailed changes to their pallet swaps and other look like completely different characters. A perfect example of this is Bowser Jr., who has the ability to change to any of the Koopa Kids. This change includes new audio and models for each of the Koopa Kids.

The combat in Super Smash Bros. for Wii U is really refined. Major changes include the removal of random tripping and gliding. These are two feature from Brawl that made the game a bit of an annoyance. Players can still trip enemies with banana peels and other items, but thank goodness they won’t just trip for no reason at all. The game works as a half-way point between Brawl and Melee. Characters are less floaty and move faster than they did in Brawl, but they aren’t quite as fast as what they were in Melee. There have also been some other features removed from the game to help close the gap between advanced and basic players. One such change is edge grabbing. In the older games a player could hang on the edge of a stage to prevent another player from being able to do so. However, the newest entry in the series allows players grabbing for the edge to kick a player from it.

Another new feature offered in Super Smash Bros. for Wii U are Amiibo. Amiibo are small figurines of characters included in the game. The first wave of Amiibo came out with the release of Super Smash Bros. for Wii U and I picked up a couple. The two I decided to buy were Samus and Peach. I went through and trained my Samus Amiibo up to level 50, the max level, and I’m impressed with it. It will consistently beat level nine computers with two stock left and the amount of customization for its skills and fighting abilities was well done. It was also really neat to see how the Amiibo picked up some of my habits when I trained it. I haven’t trained up the Peach Amiibo at all because Alia wants to, but if it’s  anything like Samus, she’ll be a formidable foe when it’s all said and done.

The visuals in Super Smash Bros. for Wii U are great. Animations are fluid and there’s a lot of detail in the characters and stages. The same is also true for the various trophies that can be collected in the game. A change added in this series from others is the inclusion of smoke that trails off of characters with high amounts of damage. This change gives players a nice visual clue as to a players damage, but it also adds unnecessary clutter to the game. Players also have violent explosions when dying that are distracting. Combine these two elements with the use of items, attacks and other features in the game and it can make for a really cluttered screen.

The audio in Super Smash Bros. for Wii U is great. The game includes a huge amount of tracks for players to listen to when playing different stages. These tracks can also be adjusted so that players can choose to listen to songs they like more on each stage. The library of music includes remixes and original pieces from various titles. Character sounds and items sounds are also great.

Super Smash Bros. for Wii U is a great addition to the Smash Bros. franchise. Its huge roster of characters, tons of stages and plethora of game modes easily makes it the best entry in the series. The game isn’t without its faults, but these are easily outweighed by the positives. Serious players may be disappointed by the removal of some of the advanced techniques, but it really does help even the playing field and makes the game more accessible.