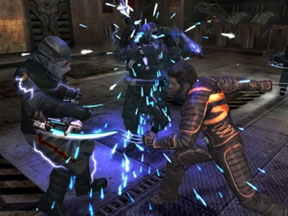 X-Men: The Official
Game Of The Movie

A few weeks ago, I went out with my girlfriend to see X-Men: The Last Stand. Since the original creative team of Bryan Singer and David Hayter were not coming back, I had my doubts about the finished product, and considering that Brett Ratner was best known for the Rush Hour series, I didn’t know what to expect. Surprisingly, I was impressed with the final product, although I have a strong belief that comic book purists would be turned off with what was done with some of the key characters.

Activision helped me answer that question before the movie was released with their recent X-Men title. Taking place between the events of X2 and The Last Stand, we find out exactly what happens to Nightcrawler, as he is one of three playable characters during the course of the game.

The other two characters available are Iceman and of course, Wolverine. After all, what X-Men game would be complete without our favorite cigar chewing, potty mouthed, adamantium-skeleton, claw bearing mutant?

For each character, it seems as they have a game style of their own. Wolverine’s style of gameplay feels like that of a typical brawler, facing Logan against a non-stop onslaught of enemies. Fighting with his claws and a limited ability to heal himself (reduced significantly from his movie equivalent), Wolverine can also engage in a berserker fury that not only makes him unstoppable, but can also heal quicker.

Iceman’s missions feel more like that of an air combat shooter. As he rides on his ice sled, Bobby must shoot ice beams to stop any fire attacks, but can also shoot out homing ice balls that lock onto specific targets, and can even create an ice shield to block any incoming attacks.

By far the most fun character to play is Nightcrawler. While a good deal of his missions involve fighting similar to Wolverine’s, his teleportation ability adds a bit of platforming into the mix. Kurt can either climb to higher levels to avoid any contact, or go all out with brawling. Brawling with Nightcrawler is a blast, as he can use his teleportation ability to attack unsuspecting foes from behind.

Many of the familiar X-Men villains can be seen in this series, including Lady Deathstrike, Sabretooth, the robot Sentinels, Silver Samurai, and Multiple Man. Magneto, however, is nowhere to be found. Other X-Men allies such as Storm and Colossus are however present to help out.

During the course of the story, narration is done presenting still frames as opposed to true CGI. This was done when the abysmal Fight Club was released a few years ago, but this time it is done much better.

The graphics work out well during the game. Aside from the previously mentioned cut scenes, the rest of the game runs very smooth with a fair amount of detail, especially on the Xbox 360 version. The only problem with the game is the brawling can tend to get a little repetitive at times, and the Xbox 360, being $60, might be too much of a price compared to its previous generations’ release.

Still, X-Men the Game is a good teaser for those who may not have seen the latest movie, and for those who want to know what happened to Nightcrawler, now you can find out.