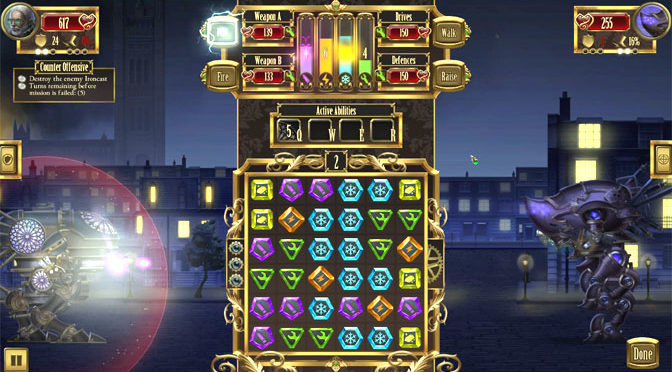 Match 3 games are a special breed of game that can draw ire or easy amusement from just about every gamer. Everyone has an opinion on them, whether it be good or bad. Ironcast, recently released on the Nintendo Switch, is a rogue-like style gem matching game, very similar in play to Puzzle Quest’s battle elements and Binding of Isaac’s random item generation. Players must pilot their mighty mecha against invading French forces in a very steampunk take on Victorian England. So, is Ironcast up to brass, or does it run out of steam? Let’s find out.

Ironcast is a rogue-like (or rogue-lite, depending on who you ask), which means that a game over results in starting over from the beginning of the game, and gamers are encouraged to make multiple, “Runs” of the game before achieving success, making much of the gameplay focus on replayability. Ironcast features different Commanders, each with their own bonus, and different mechs for you to control called Ironcasts, which also have their own starting stats and bonus, as well. 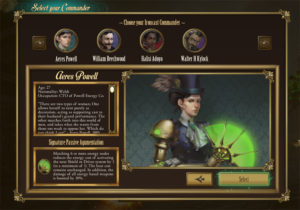 Set in Victorian England, your Commanders are all dialogue-interchangeable portraits who speak in mannerly prose to HQ at the start of every mission. Due to the fact that missions are random, a lot of the dialogue is actually unimportant, and the only missions with dialogue that matter (from what I can tell) are the bosses and the mission immediately following the first boss.

While story is an afterthought, the actual mechanics of the game are very fleshed out. Unlike Puzzle Quest or Bejeweled, players don’t swap the places of tiles in order to match 3 of them at once, you actually draw a line through as many tiles as you can- very similar to Dungeon Raid, actually. Matching more tiles at once gives an experience point bonus (this is actually where you’ll get the lion’s share of your XP), and you get two match actions per turn.

There’s also a phase where you get to attack and activate skills of your Ironcast, which can be done before, in between, or after making your matches for the turn. Once your turn is over, the enemy will make its matches on an invisible board, activate its shield or drive, and shoot at you. You’ll get shot a lot in this turn-based match 3 game, and that’s okay. 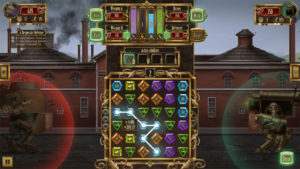 What separates Ironcast from the myriad other match 3 games out there is the simple inclusion of defensive mechanics. Matching ammo panels gives you what you need in order to shoot down enemies, while matching an energy tile gives you the energy necessary to activate your shields, which reduce incoming damage, and drives, which allow you to move and give a chance to avoid damage entirely. Both shields and drives can be activated multiple times, doubling or tripling the base effect. Coolant tiles are incredibly important as firing your weapons or using shields and drives uses up your coolant, and running out damages your hull each time you try to use something without it, which can lead to a loss quickly. Repair tiles let you repair your weapon, shield, or drive systems when an enemy damages them and causes them to break, though you can’t repair your Ironcast’s hull (overall health) using this method.

Due to the fact that you only have two matches per turn, it’s important to balance what you match and think ahead as much as possible. Being in a position where you require repair tiles to fix your shields, need energy to activate those shields once fixed, but also need coolant so you don’t take damage while activating them is a miserable situation to be in, and typically something that occurs right before a mission is failed. Shields do seem to be incredibly important, though- always prioritize keeping your shield up as high as possible, because having a strong shield means spending less of your reward money repairing the hull damage of your Ironcast. You read that correctly, you have to spend your earned money to repair hull damage in between missions: Having a high health Ironcast can be a boon during a difficult mission, but it can sting when you have to spend 600 to repair your machine and only acquired 690 in the last mission, as that money could have otherwise been used to purchase better weapons, a shield, or even permanent stat boosts like added health or energy reserves to your Ironcast. 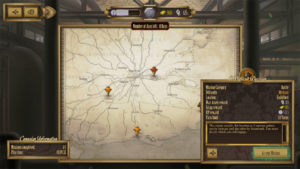 Performing matches and completing missions gives you the experience necessary to level up your character. Each level up, you’re offered a variety of augments that can be equipped to your Commander, Ironcast, or gear slots. Some offer passive skills, while the ones that you equip to your Ironcast require you activate them and have a cooldown, so many can be used multiple times per mission. These skills and augments can be everything from incredibly useful to mundane, such as refilling all of your coolant at once, to giving you 1 bonus repair when you match 6 or more repair panels at once. Choosing the proper time to activate your Ironcast’s skills can mean the difference between continuing to the next stage or restarting for another run, so always be mindful of the most optimal moments to utilize them as well as their cooldowns.

Of course, in Puzzle Quest, you could level grind past a tough stage if you were having a rough time, but Ironcast doesn’t give you such a luxury: You’re on a time limit. A set number of missions is all you have before the appearance of a boss you must face, so you have to make sure you obtain as much XP, money, and war assets, the latter of which just reduces the boss’s health by a specified amount. Your number of war assets from successful missions can be fairly important too, as it can reduce the health of the first boss by 1,500 to 2,000, which is a considerable amount since your Ironcast may only have 900 health and the boss has over 5,000 normally. 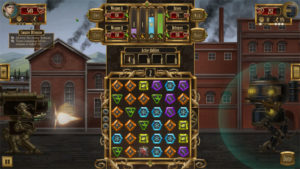 There are, at least, a variety of missions available for the player to beat. You’re offered three missions each day until the boss appears, and they can range from the standard, “Defeat the enemy Ironcast or steamtank” to, “Survive for X turns,” negotiation missions that require you select the proper dialogue choices or fail, and supply collection missions where you match a specified number of crates into your regular matching chains before time runs out. You can fail missions as often as you need- the game will continue on so long as your Ironcast still has health. Once your Ironcast’s HP hits 0, however, it’s game over and back to the start for you.

Thankfully, you earn Commendations based off how much experience you gained in the last run of the game, and these Commendations can be used to offer you new augmentations or abilities on level up, new and more powerful Commanders and Ironcasts, and static, permanent upgrades that forever increase your starting health or XP gain by small increments, all to make the next run a little bit easier. These benefits are where the rogue-lite aspects really come into play, because much like Binding of Isaac and 20XX, you’re merely unlocking abilities that you may or may not see in future runs. Many of these abilities are also extremely powerful, such as refilling all of your coolant, which can normally be a massive pain when you start running low and the enemy’s gunfire barrage is unrelenting. 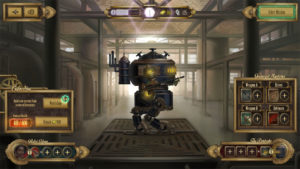 There is one small niggle with bringing Ironcast to a portable system like the Switch: Because it is a rogue-like, if you turn the system off at any time you’re in a mission, your save data for that run gets erased. Waiting for the train home from work, I accidentally ran my battery out a single mission before the final boss because I apparently missed the low battery notification while holding the system and getting on the train. After getting home and charging the system, I booted up the game again but was greeted with no “Continue” button, only “New Game.” It didn’t even save the Commendations I had earned from that prior run; everything was gone. On one hand, the game informs you that if you don’t save and quit at the base, the game won’t save your data. On the other hand, however, it tells you that once during a text box information dump within the first half hour of the game, and fifteen hours later it can be frustrating to see all of your progress gone, even if you had saved/quit previously in the run, because of a dead battery. So, keep that in mind if you play the game while out and about, and always pay attention to your battery even during a turn-based game. Lesson learned. 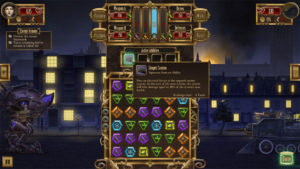 Overall, Ironcast is a good game. It has a fantastic musical score and reasonable graphics for the style of game it is. A strategic take on the match 3 genre, Ironcast has a lot to offer as it can boast a large amount of replayability for its $13 price. Its difficulty is quite high, and even though there isn’t a tremendous amount of content available in that there are only two bosses, it will most likely take hours of play before seeing the final scene and being given the Victorian Medal, which isn’t really a spoiler as the story is largely nonexistent aside from a couple interesting lines of dialogue. Those who appreciate rogue-like difficulty and aren’t afraid to restart, as well as those who enjoy puzzle games with strategy elements will undoubtedly love Ironcast, as it’s a very strong title. For its price, it’s somewhat hard to beat, especially in the Switch’s library at current.