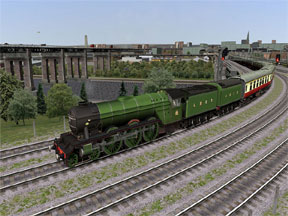 There is one main thing I look for when reviewing a simulator. Is it realistic and fun at the same time? I know that this seems like an obvious question, but it’s one that many simulators miss.

That being said lets first look at the Railworks 2 Train Simulator’s gameplay. The interface is incredibly user friendly so that anyone can play this game. This was very nice for me since I’m not a huge buff on train simulators. The three main controls are power, direction, and brake. This is the sacred Tri-Force of this game and you must get accustomed to them if you ever want to rule the rails. Applying them to gameplay can be hard though.

Judging the distance from your drop off and then increasing the brake while decreasing the power can be complicated to say the least. On more than one occasion I found myself passing my station and either failing my mission or having to put the train in reverse. Gameplay is unforgiving, which being a simulator I think this is how it should be.

On a side note I have to admit to abusing the game a little, such as planning out which trains where heading where and then making an intercept course with them. Sure it isn’t what the game is meant for, but hey I had fun with it and it’s all about the player right?

Also of note is that the game has a good level editor. So many games are now including these and honesty it’s a great idea. Either you use it and get some extra content out of your game or you don’t, but still have a solid game to play. And even if you don’t make use of it, others will, and that means more free content for everyone. The game gets bonus points in my book for including this feature.

The sound effects in the game are accurate as well. Listening to the sounds of a train pulling out of a station really does give off the effect of standing there (wearing headphones definitely helped). Sadly though, there is no soundtrack in this game whatsoever. Sure hearing the engine is nice and all but after twenty minutes of rolling through fields it wouldn’t be bad to hear some form of music, even if it is just a melody in the background.

My only real gripe with this game though is the graphics. Yes all the trains are accurate, and yes it is a train simulator, but would it have killed them to work on their environments more? When I look at the road beside me I shouldn’t see a car "gliding" down it. Sure I laughed, but it was a laugh at the patheticlesnesses (Yes I made that word just for you Railworks 2) of those graphics, especially when compared to the trains themselves.

On the same note as the ghost car are the floating houses. Sure looking out into a small town looks nice at first, but then you notice that some of the houses aren’t even all the way on the ground. Some are completely floating above it while others are half sunk into it. Now I’m no architect or physicist but I don’t think that is how it is supposed to be done.

My final complaint of the graphics and then I’m done. When the game tells you to "let open the throttle and enjoy the view" well that is exactly what I’d like to do. The problem is that the "view" I’m supposed to be enjoying is rather ugly. Where talking Playstation One graphics here at the best. All the textures are incredibly generic and lack any form of detail. I’ve seen better graphics come from first year game design students (I hope you texture designers for the game felt that blow).

All and all the game is solid as a rock, albeit an ugly one. If you love train simulators and don’t mind the eye burning graphics outside your window, then it’s a good title to pick up that is accurate enough to probably teach you how to properly drive one of these multi-ton monsters.

Editor’s Note: Game reviewed on a PC with a copy downloaded from Steam.