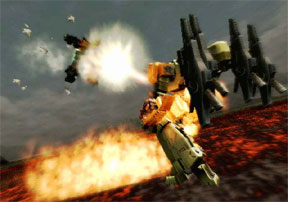 Armored Core: Nine Breaker is the ninth game in a long series of mech combat titles. The game features an intricate setup where you can customize every single aspect of your giant robotic death machine.

In this business, any game that can survive through nine sequels has probably got to be considered a success even if it does not generate the huge sales numbers of some of the mega titles. Someone has got to be making money somewhere along the line for so many games to be made.

That said, I just don’t see it. Armored Core: Nine Breaker is only the second PS2 game I have ever experienced without a plot. Personally, I will suffer through even a lukewarm title like Capcom’s Beat Down if it has an interesting plot. If you want to see how the story turns out and see what happens to your favorite characters, you have no choice but to push onward.

Nine Breaker has none. There is a text message at the beginning of the game that says you are going to a special school to learn how to pilot your mech, and that is it. The rest of the game consists of two types of missions, training and arena combat.

Training missions are a joke. You are supposed to shoot a certain number of targets within the time limit, smash a certain number of walls or avoid being hit. There really is no reward for completing the missions, and no penalty for failure. Seeing how mind-numbingly boring most of them are (try to smash 200 yellow walls in 160 seconds! GO!) there really is no reason to subject yourself to them. Especially without a plot, I just don’t see the point. What did those yellow walls ever do to you?

The arena combat is a bit better. You get to go head to head against one or several other mechs. The arenas are interesting looking and add some spice to the game. You can duck behind bridges or onto platforms to dodge incoming fire or set up kill shots on your enemies.

Ad you get better in the arena, you move up to new classes and can fight tougher opponents. Eventually you can become the best mech, called an Armored Core or AC, pilot in the game.

While I could not stand this title, I can see why some gamers would like it. If you are really into stats, then this is your title. There are over 400 parts that can be customized and dropped onto each AC, and each change makes your robot perform differently. You can opt for a larger torso that can hold more ammo, at the expense of more weight strain being placed on your legs. You can add effective beam weapons, though these tap into the same source that powers other important systems. You can upgrade your power plant to compensate, but that might mean producing more heat in the long run which requires tweaking still other components.

In fact, many of the aforementioned training exercises can be completed easily if you build the right AC for the job. (and are impossible with the wrong configuration) If your mission is to shoot a bunch of targets, you can install multiple missile launchers or quick-firing cannons. If your training consists of trying to avoid getting hit for a certain period of time, you can strip out all the weapons and go with as light a frame as possible with a huge set of boosters so you can fly around all day ahead of the trailing missiles.

This is made easier because you can put pretty much any part onto your AC without regard to how much it costs. If you need the biggest gun in the game, you can just drop it onto your AC. You just then need to support it with a proper frame after that.

I could see the game being popular if you could jump online and take your best design against others, but there is no online play! I guess that broadband connection coming out the back of my PS2 is just for decoration. Anyway, you can link up to four PS2s and play that way, though I think it’s hardly worth the effort. An Internet matching service like we find with games like Burnout 3 would be helpful, and might make the lack of any storyline easier to swallow. Everyone thinks they can build the best AC, and if you could go online with the game you could prove it.

If you really like exploring statistics and seeing the fraction of percentages move (complete with nice graphs) as you install and uninstall various pieces of equipment, then Nine Breaker might be a fun title for you. Anyone else should probably steer clear. Even an aging PS2 title like Ring of Red, which featured very basic turn-based mech combat, is likely going to be more fun for you.