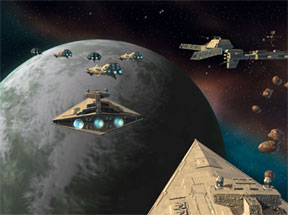 Created by ex-Westwood (Command & Conquer, Earth & Beyond, Dune II) and ex-Origin developers (Ultimas, Wing Commander), Star Wars Empire at War is definitely a LucasArt’s portfolio piece. Hands down it is one of the better Star Wars games. From graphics and gameplay to audio and fun it has a polished feel that screams STAR WARS through and through. In fact, this is the RTS they have been trying to make for years now.

Think of it as empire management without the long waits and pitfalls of Rebellion and ground control without all the problems of Force Commander.

Taking place before the events of A New Hope, Empire at War merges the canon from the original trilogy with the new trilogy. Planets, ships, and characters from the entire Saga are present. There are over 40 different planets to conquer or liberate representing all of the planets from the six films including many from the expanded universe.

I’ll be frank… Empire at War isn’t easy and has a pre-requisite that requires you played real-time strategy games before. Thankfully the folks over at Petroglyph made this game intuitive. I laud LucasArts’ flexibility with their license in letting Petroglyph create a game that in spirit harkens back to the Dune II and Command & Conquer days. Many fans of both with no doubt have some nostalgia.

There is a tutorial mode where you play through nine missions as you learn the ins and outs of command. This ranges the gap from selecting units and using their special abilities to moving fleets around the galactic map. Most of the tutorial levels are interactive and quite fun. A few are non-interactive that you simply watch as different moves and strategies are demonstrated. This should help to put everyone on an equal footing.

Unlike past RTS games Empire at War virtually eliminates unit construction from land and space battles. The emphasis is on how well you perform in battle. Therefore construction is a task relegated to the galactic map aspect of gameplay. While in this mode a high degree of multi-tasking is required. It’s not just the planets themselves you have to monitor but also which forces in orbit and on the planet’s surface.

Beyond just simply parking your air and land forces you also have to ensure there are adequate land and air bases; under the watchful protection of turrets, units, vehicles, and ships.

The way it works is that each planet you control gives you credits at the end of a galactic day. Using these credits you can build facilities in space or on the ground of any planet you control. To control a planet you must own both the space around the planet and also the actual ground itself. That normally means you will need to fight a space battle first, and then can attack the planet with whatever ground forces you brought along. Certain structures like infantry barracks automatically produce garrison troops, which don’t count toward your population cap, so having a lot of them around is a good thing though planets can only support so many structures so you need to plan ahead. In space, orbiting satellites you build will automatically produce ships for defense, and star destroyers have wings of fighters and bombers that go with them, making them very deadly indeed.

Interestingly enough, controlling space gives you an advantage in the land battle, if you have bomber units – which all star destroyers have by the way. With bombers in orbit, ground troops can call in devastating strikes to break open particularly difficult defenses, but only every so often. And if you control a planet with planetary defense cannons, they can fire and participate in the space battle.

My only complaint so far has been how difficult the Imperials are at "Normal" gameplay. If you play Galactic Conquest as a Rebel the Empire begins the campaign with a planet possession ratio of 3:1. This means from the get-go they can obtain credits faster and build ships faster than you. And as an AI driven opponent they also have an innate ability to generate wave after wave of reinforcements. I remember attempting to take out the mining planet Kessel (a key strategic location which boosts overall credits) with three separate large assault attacks. The Empire at each turn was not only able to dispatch my assault but could instantly reinforce all of their destroyed ships within minutes.

The Empire was a bit easier to fight on the easy level. And it is interesting that both sides are really different in a lot of ways. For example, the Empire raises its technology level by building research facilities. The Rebellion raises theirs by stealing technology from the Empire using spies. The Rebellion can also hire smugglers to steal credits from the Empire, though an alert player in a multiplayer game will notice the credit drop and send out a bounty hunter to eliminate your spy. Then again, it’s a huge universe, so they may never notice.

The Rebels can also take a small fleet of less than four units and ignore an Imperial blockade around a planet, sneaking directly into the ground battle. And the Empire can build the Death Star, which unless defeated by the Rebels, can destroy entire planets.

Each side also has heroes that they can deploy. These heroes are incredibly powerful. Lord Vader for instance can send out a force wave that will kill all infantry troops standing around him. And he can also lift tanks and other vehicles into the air and crush them. He is not invincible, but very resistant to damage.

Just about every unit in the game has some sort of special ability though, which makes for a lot of battlefield tactics in addition to the overall galactic deployment strategy. Speeder bikes for example can drop thermal detonators. So you can zoom them into a base and drop the detonators, then haul butt out of there. The bombs will explode and do a lot of damage. And there is no friendly fire so exploding munitions in your lap won’t hurt. This is a little bit odd, but makes it so you can’t make a really bad mistake in a tactical battle.

The bottom line is for those that do buy Empire at War, you will enjoy the game quite a bit. And more to the point the Galactic Conquest campaign is the highlight. Of course the difficult AI might take some getting use to, but overall the game is challenging and fun.

Of note: there were some pathing issues with spaceships that seems to have been fixed with the latest patch. I recommend patching the moment you install.