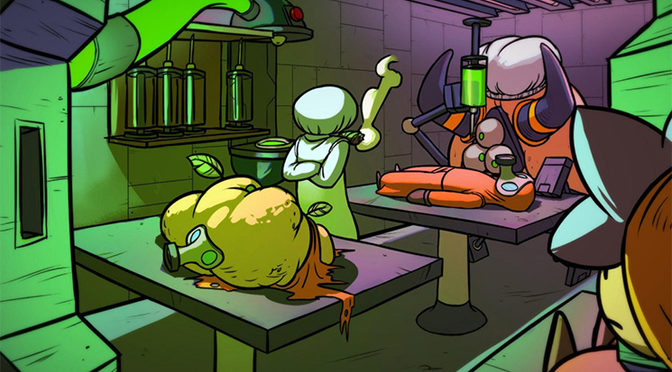 The platforming genre is one of the oldest pedigrees in gaming, and has been having a lovely resurgence in recent times thanks to a number of remarkable titles. Splasher is among the most impressive added to the Switch eShop, and carves out a niche for itself with its frenetic, fast-paced gameplay that utilizes the level design superbly, as well as a number of mechanics that differentiate it from its peers. So does this game make a splash, or should you give Splasher a flush? Let’s find out. 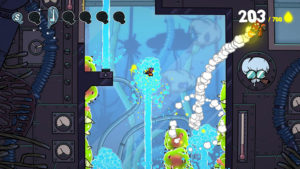 Splasher is a simple concept: A nameless protagonist works at a dystopian-like corporation called Inkcorp as a janitor or sorts until he discovers that other employees are being used a guinea pigs for inhumane experiments. The protagonist gets discovered by the main villain, an evil doctor, and is then on a rush to escape the facility with the aid of an experimental water cannon that can clean ink off of walls, and later shoot ink itself. The giant corporate headquarters of Inkcorp is the world map itself, and it houses a number of stages the player must run and jump through in order to escape.

For those who have played games like Rayman Legends or Super Meat Boy, the controls of Splasher should feel incredibly intuitive. Running, jumping, spraying your water cannon- everything feels tight and responsive, which is one of the most important aspects of a platforming game. The mechanic that separates Splasher from most other platformers is the water cannon, which can be easily aimed while moving and jumping to spray sticky red ink that’ll let you crawl up walls, a bouncy yellow ink that will bounce you high into the air (think sprayable springs from Sonic the Hedgehog), and water to wash away enemies and ink.

Level design is what makes or breaks a platforming game, being second in importance only to controls, and it has to be said: The stages are designed ingeniously in Splasher. Nearly every single section of the game is constructed in a manner that makes the jumps and obstacles visible, satisfying to overcome, and new ideas are introduced constantly throughout the campaign in a way that never makes you feel like you were just blindsided. It’s actually quite impressive how Splasher has a player performing a set of complicated movements so fluidly. 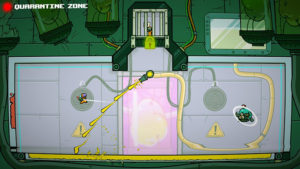 For example: Crawling along the ceiling then dropping while shooting bouncy ink at the floor, so you can rebound into the air and spray water to move a platform, all while dodging saw blades. Later levels don’t exactly hit Super Meat Boy Hell levels hard, but it can be pretty difficult for those not well versed in platforming games or perhaps children who are very young. 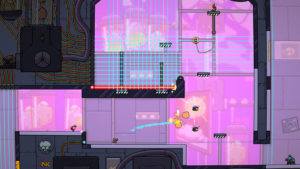 Thankfully, mechanics are always introduced a time or two before you need to show mastery of them. For example, early on you might just have to spray water at a platform with an employee in need of rescue (the collectibles of this game) in order to move it closer to you so it can be collected, but then shortly thereafter you might need to spray a platform with water so it rises, while jumping off of walls, but not raising it so much that you kill the collectible on the instant-death spikes on the ceiling. A lot of the workers that you rescue present mini-challenges in and of themselves, and while some may be hidden, the largest portion of Splasher’s difficulty will come from trying to obtain all of the collectibles without killing them. Of course, the goal of each stage is simply to reach the end: If you have enough employees rescued and just want to beat the game, you certainly don’t have to push yourself.

Spraying enemies rewards you with golden water droplets, which are spent at the end of each level to release the final captive employee. It’s very similar to Rayman Origins and the like in this regard: If you miss an enemy or splotch of gold paint as you progress through the stage, you may not have enough droplets to 100 percent the level and have to come back later. The employees are a collectible, essentially, used as a gating tool like the Stars in Super Mario 64 or the Moons in Super Mario Odyssey. You won’t need all of them to beat the game, but you do need to keep an eye out for them in order to progress to the end. 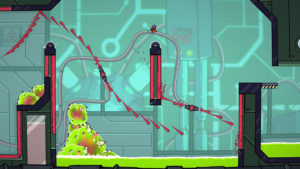 There are also special zones, very similar to Donkey Kong Country’s bonus stages, where successful completion rewards the player with a collectible of some type, oftentimes introducing a twist on how to defeat old enemies, something that will typically make the player go, “Oh, so I can do that too.” The only thing that Splasher doesn’t really do is pad out the length, as the campaign itself can be completed relatively quickly since there’s only a few more than 20 stages. There are time trial and speed run modes, let alone 7 collectibles per stage, which should be enough to add on some extra hours of play.

The graphics have a very vibrant, cartoony feel, which will make the game very inviting for children looking for a new platformer. The graphics aren’t going to break any technical boundaries, but everything looks great, even when zoomed in or out, and you can easily tell what’s a collectible versus what’s going to kill you at all times. The soundtrack, on the other hand, is a superb batch of tracks that have a gentle techno inspiration. The music may not evoke thoughts of, “Oh, I am absolutely going to die repeatedly” like Super Meat Boy’s Hell stages, but it’s pretty great in its own right. 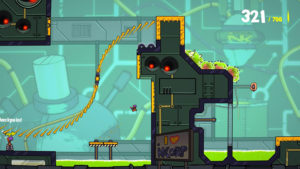 Overall, Splasher is an extremely competent platformer with phenomenal level design and tight controls. The reasonable graphics and great soundtrack are icing on the cake. The game can get a bit difficult toward the end, probably resulting in more than a couple impromptu deaths due to missed jumps or accidentally trying to shave your face with the sharp end of a saw blade or acid or… well, the list goes on, but the bottom line is that the difficulty is overwhelmingly fair and able to be overcome with a little practice. The only downside to Splasher is that it’s a short romp; new ideas are thrown at the player constantly to avert boredom, but there’s also not that many different levels to experience if you really enjoy the game. If you like platforming games with solid level design, there’s little reason to avoid the colorful journey that is Splasher.