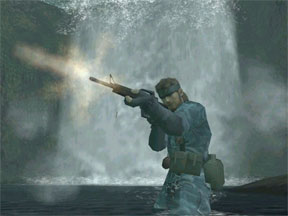 "Who are the Patriots?"

For three years that question has been rolling in my mind. After the convoluted story that dominated Metal Gear Solid 2: Sons of Liberty, I was left with too many questions, one of which being about the aforementioned Patriots, especially considering the original members were reported dead about 100 years before SOL ended.

In searching for an answer to this mystery, Konami’s Metal Gear Solid 3: Snake Eater takes a unique step. By making the game a prequel, it allows us to delve into the story of the Patriots, the legend of Big Boss, and witness the development of what will eventually become the first Metal Gear nuclear tank.

MGS 3 takes place in 1964, during the heart of the Cold War, and centers on a Russian rocket scientist named Nikolai Steponavich Sokolov (voiced by Brian Cummings). Two years ago, Sokolov requested asylum for himself, as well as his family. They were all taken to the US, but shortly after came the Cuban Missile Crisis. As part of the deal to remove their missiles from Cuba, Russian Chairman Kruschev demands the return of Sokolov.

Now there are reports of the development of a secret nuclear weapon, and Sokolov is developing it at Research Bureau OKB-754, which is located on the Virgin Cliffs in Tselinoyarsk, Soviet mountains. Recovering the weapon lies in the hands of a covert organization called Fox, and they send one man into Tselinoyarsk. That man is codenamed Naked Snake (David Hayter).

Eventually Snake locates and retrieves Sokolov, but in the process he is ambushed by a GRU unit, lead by a villain we will eventually know as Revolver Ocelot (Josh Keaton). Snake dispatches the GRU troops with a technique called CQC (Close Quarter Combat), and does the same to Ocelot, but not correcting Ocelot about using an automatic pistol when a revolver is more his taste.

On the way to their extraction, both Snake and Sokolov witness a test firing of the Shagohod, a nuclear equipped tank capable of deployment anywhere. But they are not alone. As they approach a bridge, they are stopped by none other than The Boss (Lori Alan).

The Boss worked with Snake in the past. She helped train Snake in the aspects of CQC, and was the only woman that Snake loved. She was also the head of the Special Forces who lead both the Americans and Soviets to victory in World War II. However, she admits her intentions, as she arrives with Colonel Yevgeny Volgin (Neil Ross) and presents him with three gifts (a "Davy Crockett" portable launcher system and two miniature nuclear shells) as a sign of her defection. Volgin uses one of the nuclear shells to decimate OKB-754, despite Ocelot’s disdain of attacking his fellow countrymen, and The Boss, after a fierce CQC battle, tosses Snake over the bridge and leaves him for dead.

As a result, President Lyndon Johnson receives a call from Khrushchev, where he is accused of an American nuclear strike on Soviet ground. The Soviet forces are on secondary alert, and if the situation is not settled, Khrushchev will be overthrown by the Brezhnev faction (which Volgin is a member of), and there is threat of a nuclear attack on the US. In addition, both Snake and his commander, Major Zero (previously known as Major Tom), are branded as traitors, accomplices to The Boss’ treachery, and awaiting execution by firing squad. They have only one way to clear their names, and that is to fulfill Khrushchev’s request: to destroy the Shagohod and to assassinate The Boss. Thus, Snake is sent back to Tselinoyarsk to finish Khrushchev’s demands.

With the new story and setting, the old aspects of the Metal Gear Solid series are not gone. Instead of indoor environments, most of the game takes place in the jungle. As a result, it is important to become one with the environment, and that’s where camouflage comes into play. Replacing the Soliton radar display, which hasn’t been invented yet, is the Camo Index: a percentage of how hidden Snake is in his surroundings. Lying still and using the right camouflage makes Snake invisible, but running around and clashing with your surroundings makes him open to easy attack. It is important to stay as hidden as possible because reinforcements are more cunning and dangerous than ever before.

In addition, Snake needs to adapt to the dangers of the jungle. One of the main elements is survival, and that includes hunting for food. Taking a cue from the Stamina gauge from SOL, once Snake’s stamina goes down, his aim will weaken, and he won’t be able to recover from injuries as quickly. Stamina is also affected by the weight of objects that Snake carries, and only eight weapons and eight items of equipment can be carried at once. The rest must be put in his backpack.

As for injury recovery, Snake will need to tend to any wounds he may suffer. Gunshot wounds require him to dig the bullet out of his body with his knife, disinfect the cut, use styptic to coagulate the flow of blood, and bandage the wound. Deep cuts require the same treatment as gunshots, with the exception of suturing the wound in place of digging out the bullet. Broken bones require a splint and bandage, and burns require ointment and bandages.

Hand to hand combat in the past only consisted of fist fighting, grabbing foes from behind, and snapping their necks. However, the original Snake has a few new tricks up his sleeve. Being an expert of CQC, a technique he learned from The Boss, Snake can still grab his foe, punch him out, or break his neck. In addition, he can interrogate, throw his foe to the ground, use him as a human shield, and even slit his throat.

Another Metal Gear trademark, the boss battles, have been taken to a new dimension, this time being The Boss’ Cobra Unit, the same organization she fought with in World War II. There is The Pain, who uses his swarm of hornets to do his dirty work, The Fear, a spider like monstrosity who is able to scale vertical surfaces Gollum style, The End, a 100 year old sniper capable of adapting to his environments, and The Fury, a former Russian cosmonaut. There are also reports of a mysterious character called The Sorrow, but no one knows of his location, presumably dead. Anyone who is expecting the standard boss fare is going to be taken for a ride, as the new bosses are original and demanding. One boss battle alone will take over an hour to finish. (There are reports on Gamefaqs.com that this battle can last as long as 5 hours!)

Metal Gear Solid 3’s presentation is unbelievable. The jungle is lush, where every single blade of grass is rendered separately, fire illuminates the entire landscape, and the characters seem to come out of an FMV cutscene (but everything is rendered in real time). The only problem is that the system is pushed so far to its limits that it does slow down at times. Aurally the game is as superb as ever. Harry Gregson-Williams returns for the original score, and the opening theme/title sequence by Kyle Cooper is reminiscent of any James Bond movie.

And what could any MGS title be without superior voice acting. The biggest surprise is David Hayter returning as Snake, considering the game took place before Solid Snake was created in the "Les Enfants Terribles" project. Nonetheless, aside from the time period this is the same role we have come to expect from Hayter; pretty much a case of like father, like son. As for the rest of the cast, they all provide top notch performances, particularly those of Ocelot, Volgin, and The Boss. I did find it a bit strange, however, that with the exception of three main characters (Khruschev, Sokolov, and another Soviet named Granin), the rest of the Russian characters spoke with hardly any detectable Russian accent. There is also less time spent on the radio (formerly the Codec), so we will not have to endure long conversations like what happens in SOL.

In the end, you end up feeling sympathy towards The Boss as you find out more about her, the reason for her "defection," and I dare anyone to not break down during the emotional ending, perhaps one of the greatest endings in game history.

The ending won’t come so quickly, as this game is longer than any other MGS title, taking upwards of 25 hours to finish. Once the main story is done there is still lots to do, searching for new camo patterns, locating hidden frogs scattered throughout the game, and a new Snake vs. Monkey minigame combing elements of MGS and Ape Escape with hilarious results.

Anyone who felt disappointed with MGS2 should feel vindicated now, as the MGS series is back to its full glory. Personally I feel now as though San Andreas has serious competition for the PS2 crown this year, and with the recent announcement of Metal Gear Solid 4, I can only wonder what will be next.But by far the best thing about MGS3 is NO RAIDEN! (Sort of).